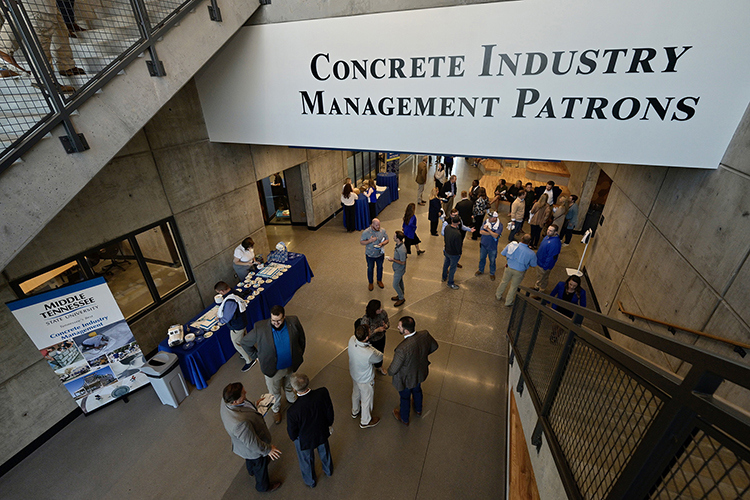 Middle Tennessee State University officials cut the ribbon Thursday, Oct. 13, to officially open the new $40.1 million School of Concrete and Construction Management Building students just began utilizing on the west side of campus as they prepare for professional careers in a high-demand sector throughout the Midstate and beyond.

The 54,000-square-foot facility will be an integrated and experiential learning laboratory for 135 current Concrete Industry Management majors and 200 Commercial Construction Management students and a major change from the roughly 9,000 square feet of space they’ve been using in the Voorhies Engineering Technology Building.

Among the building’s many features are a 200-seat lecture hall; a quartet of basic materials and building labs; a dedicated mechanical electrical plumbing, or MEP, classroom; a covered amphitheater; and two computer labs, including a virtual design and construction lab that’s capable of creatihg advanced building models and construction simulations, as well as an augmented virtual reality lab for immersive experiences.

Students graduating from the program average $60,000-plus in starting salary and have an almost 100% placement rate, program officials said.

University President Sidney A. McPhee called the facility “the beginning of a new chapter in the success of our MTSU CIM (Concrete Industry Management) and CCM (Commercial Construction Management) programs. … With today’s dedication, we are publicly reaffirming our commitment to maintaining the nation’s finest program in concrete and construction management.”

McPhee said he was “amazed at the many ways concrete was utilized in the design and construction. Students will see firsthand how the many forms of concrete can add value and creativity to a structure. The building is a true living laboratory with examples of various construction techniques and operating systems operating in full view of students.”

Construction is a $1 trillion-plus industry that impacts every aspect of life, including where we live, work, learn, shop and dine.

McPhee saluted industry partners who raised $5 million in matching funding for the building project and who “have been incredibly generous with their time and resources, enabling us to have an amazing facility for our students.” He also introduced numerous other MTSU supporters, including Board of Trustees members, led by Steve Smith, and state legislators.

The builder was Birmingham, Alabama-based Hoar Construction. Orcut/Winslow was the architect. Construction began in January 2021 and finished in September.

The new facility marks an expansion of the university’s “Corridor of Innovation” in the heart of campus, anchored by the state-of-the-art Science Building.

In several years, SCCM will have a new neighbor: the Applied Engineering Building will be built in that same area of campus.

Referencing alumni, Strong asked if they “could have imagined that this new building would be your legacy? Our celebration today is a tribute to your success and the imprint you have had on the concrete and construction industries.”

He added: “Your continuing commitment to our programs is a cornerstone of our success, and you, along with our industry friends and partners, have made this building possible. Beyond contributions to the building, we are grateful for the continuing support of our students” from concrete, the CIM umbrella, Associated General Contractors of Middle Tennessee and Home Builders Association of Tennessee.

Strong praised the effort of his staff and faculty with the mid-semester move and the loyal support of industry partners.

MTSU’s first CIM graduate, Southern Concrete Machinery owner Chris Davenport (Class of 2000) of Murfreesboro, Tennessee, was among the event’snspeakers, as was Jessie Boone (’08), president of the CIM Patrons and Road Worx director of business development.

Boone told the large crowd gathered for the ceremony that she dropped out of school but made a life-changing decision to return and be a part of CIM.

Austin Chaney was the initial CIM director. Heather Brown of Murfreesboro directed CIM for 20 years. During her tenure, both programs moved under the School of Concrete and Construction Management umbrella.

“To me, it’s more than a building. It’s the people,” said Brown, who received a standing ovation from attendees for her tireless efforts to help make the new building a reality. She noted a poem read by Jon Huddleston, associate professor and current CIM Program director, to close the event that highlighted the importance of building bridges for the people who will follow you in life.

“The poem resonated with me. It’s what I said all the time, ‘I don’t build buildings. I build people.’” Brown said. “The day culminated that for me. I felt like a legacy of so many key people who had passed away were shining down right now — people who were here, people who weren’t able to come.

“Buildings are wonderful, but this was about people. This is a testament to how special CIM is. It’s absolutely the student success, the alumni success. I was very excited to come here today, but I was almost equally excited to see the people — all the alumni that I had a little part of their life. … Universities can create special microcosms of relationships. This is really good for MTSU to have a special program like this.”

A dean and student’s viewpoints

College of Basic and Applied Sciences Dean Greg Van Patten said MTSU’s School of Concrete and Construction Management “produces graduates that are in extraordinarily high demand across the United States, but especially in Middle Tennessee, where there is so much growth and development occurring.”

Van Patten said the structure is “a sophisticated instructional tool — a functional building with educational elements deliberately and intelligently integrated into its design. For the first time, we will have classrooms and laboratories that were designed from the outset for the specific purpose of teaching students about Construction Management and Concrete Industry Management. “

MTSU junior concrete major Aric Rickman of Franklin, Tennessee, saw the building for the first time Wednesday, one day before speaking on behalf of students. He calls it “amazing, with all new equipment and all the detail that went into it.”

He said he appreciates all the industry donors who have contributed money to the facility. “They are physically giving back for students to have in future years. This building means a lot of hope (for future growth).”

Rickman, whose immediate family also attended the ceremony, has interned with Hi-Way Paving, worked full-time in the summer and currently works part-time for the company. He plans to graduate in May 2023.