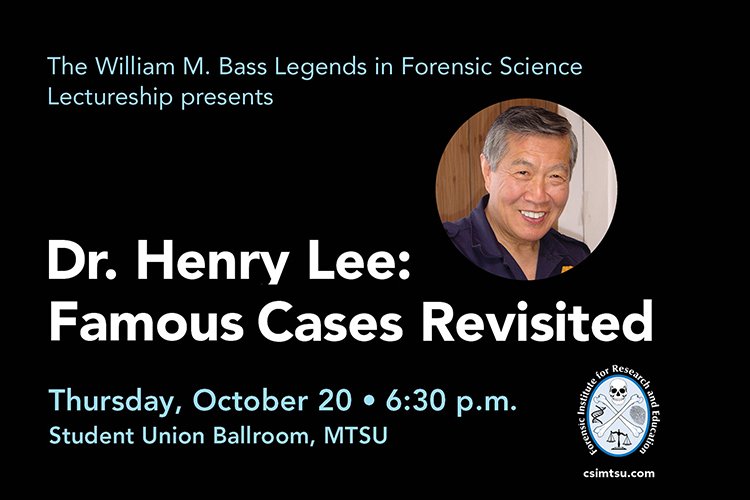 Dr. Henry C. Lee, professor emeritus of the University of New Haven’s College of Criminal Justice and Forensic Sciences that bears his name, is scheduled to speak at 6:30 p.m. Thursday, Oct. 20, at MTSU’s Student Union, 1768 MTSU Blvd., in the second-floor ballroom.

A campus parking map is available at https://bit.ly/MTSUParking.

The Bass Lecture Series, named for legendary University of Tennessee forensic anthropologist Dr. Bill Bass, brings forensic-science experts to MTSU each fall and spring. The series went on hiatus in 2020 and 2021 during the pandemic

Lee, who also is professor emeritus and director of his Connecticut university’s Henry C. Lee Institute of Forensic Science, has consulted on more than 8,000 criminal cases in 46 countries, including the O.J. Simpson trial, the JonBenet Ramsey murder investigation and the famed “murder without a body” Connecticut woodchipper-disposal case of flight attendant Helle Crafts.

He began his career as a police officer in Taiwan, where his family had fled the Chinese Civil War, and rapidly rose to become the Taipei Police Department’s youngest captain.

He emigrated to the United States with his wife in 1962 and earned a bachelor’s degree in forensic science from New York City’s John Jay College of Criminal Justice, then graduated with his master’s and doctoral degrees in biochemistry from New York University. Lee served as chief criminalist and director of the Connecticut State Police Forensic laboratory from 1978 to 2000.

Along with teaching future forensic scientists at New Haven for nearly 40 years, Lee’s career has included work on the post-9/11 forensic investigation; the Washington, D.C., sniper shootings; the reinvestigation of the assassination of John F. Kennedy; the 1993 shooting death of Deputy White House Counsel Vincent Foster; and the 2004 assassination attempt of Taiwan’s President Chen Shui-bian and Vice President Annette Lu.

MTSU’s Bass Lecture Series launched in spring 2007 with a talk from Bass, the founder of the world’s first “Body Farm,” or forensic anthropology research facility, at UT. Bass also served on the board of advisers for FIRE, which is affiliated with MTSU’s interdisciplinary Forensic Science Program.

Holland is now director of MTSU’s Forensic Institute for Research and Education, taking over after the 2019 retirement of FIRE founding director and Professor Emeritus Hugh Berryman.