It is a new Middle Tennessee State University Creamery chocolate milk label from a new labeler. And it’s a new-style bottle.

“People will notice the change, but the MTSU chocolate milk will be the same. It’s the same great taste,” said Matthew Wade, director of the MTSU Farm Laboratories, including the Creamery. 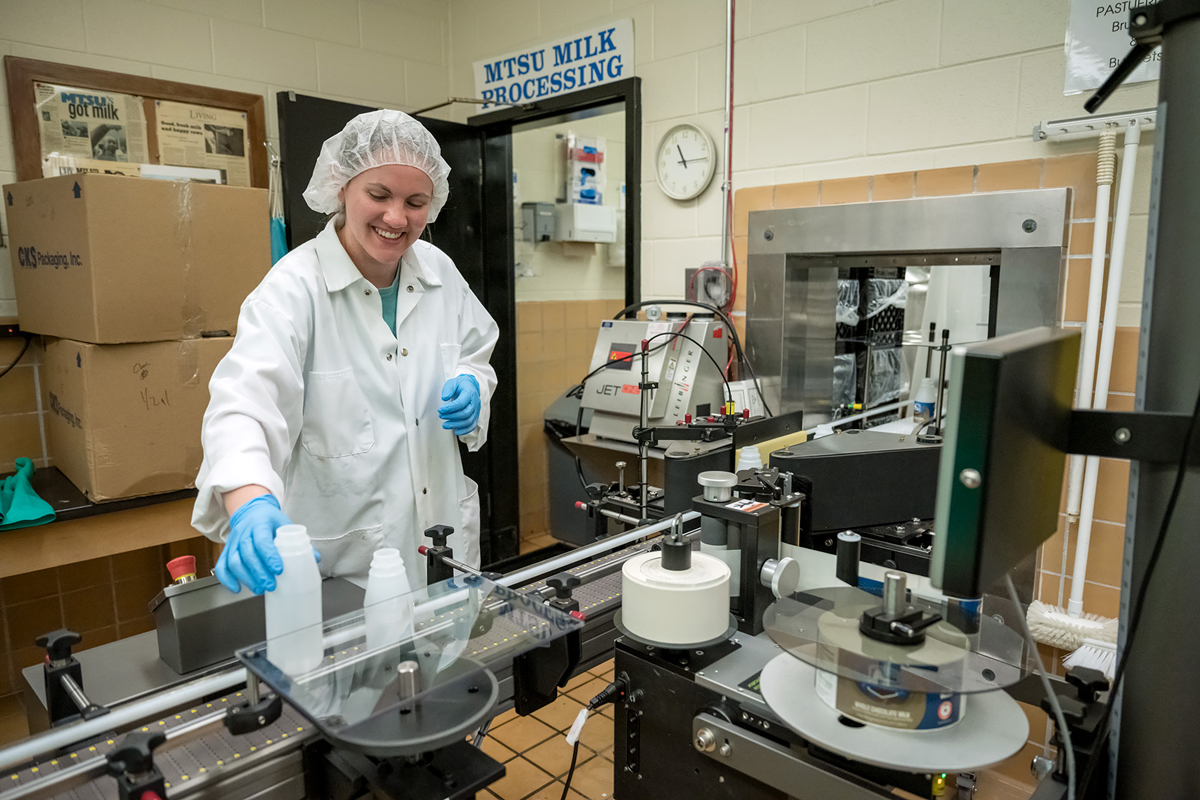 The MTSU School of Agriculture’s Creamery unveiled the new chocolate milk label this week after recently purchasing a new labeler. The pint-sized bottles have changed to round after originally being square.

The Creamery’s white milk will shift to round bottles with the new label beginning next week, Wade said.

The new labeler “has already saved us a lot of money in student labor,” Wade said. Students have hand-labeled 150,000 bottles — a lot of labels and a lot of time,” he said. “Now, a student can stand at the labeler and run several hundred bottles in just a few minutes.”

The new labels feature larger logos promoting MTSU, the Creamery, “I Am True Blue” and the Tennessee Milk program. 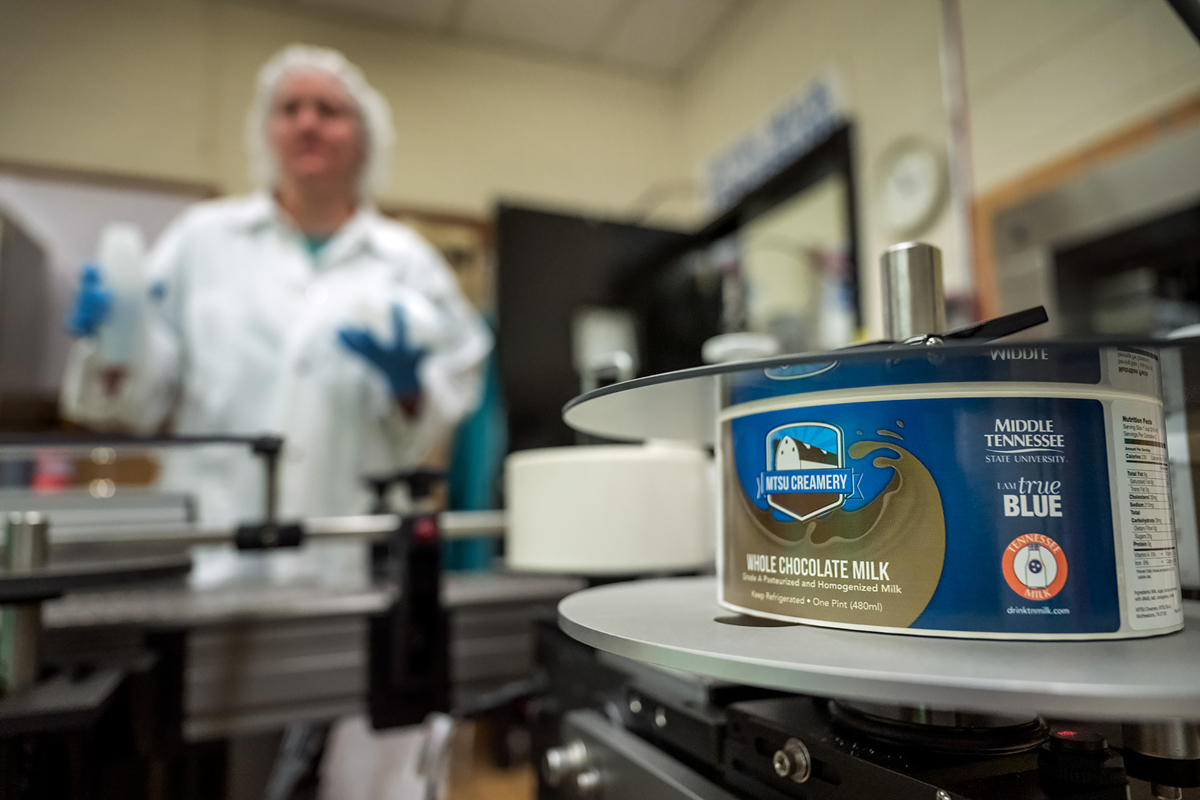 The Creamery, which began in June 2017, is a combination of milk processing plant behind the Stark Agriculture Center in the heart of campus and the MTSU Dairy at the university farm in Lascassas, Tennessee.

To save money, Wade said they purchased a semi-truck load — 55,000 pint bottles — that should last nearly 10 months.

Wade thanked College of Basic and Applied Sciences DeanBud Fischer for approving the purchase of three extra storage units, two of them in the back of Stark Ag Center and one at the farm off Guy James Road, to store the extra bottles.

The Creamery supplies milk to Aramark on campus (McCallie Dining Hall and several provisions on demand-type locations) and to about 15 off-campus vendors.

“He has sold so much milk — 100 pints in four or five days,” Wade said, “so we took him another 100 pints. He’s been great. He’s even written about us (in a local publication). It has been more informational, the nutritional qualities as a recovering drink.”

Kestner said he purchased a special cooler for the chocolate milk “and we’ve been having a lot of fun with it.”

On Thursday, April 30, Wade said those working in the Creamery “played around with a plain ice cream base — cream, milk, sugar and stabilizers — because a lot of ice cream shops keep asking for it. It was successful by and large. We will probably be selling an ice cream base, but we will not be making ice cream at this time, though.” 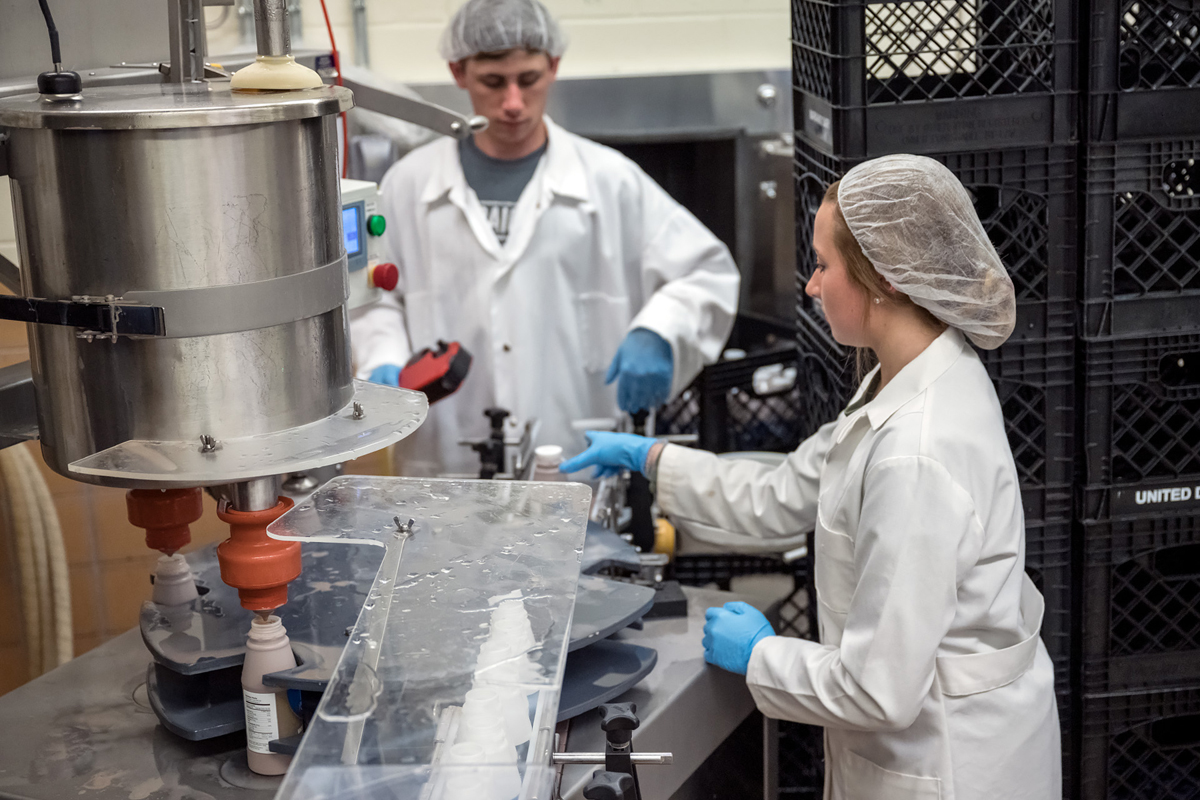 The economy and coronavirus

Wade said he anticipates an 18 to 20 percent drop in sales by the milk plant by the end of the fiscal year (June 30) because of the coronavirus pandemic’s ripple effect on the economy.

Sales have dropped because fewer MTSU students have been on campus because of the move to online courses in mid-March, and restaurants, coffee shops and ice cream shops have been closed.

“With marketing opportunities, we’ve got to be strategic with it,” he said. “Lately, we’ve been able to market some of our other commodities like hogs and steers through local markets because the demand for local meat has actually increased.” 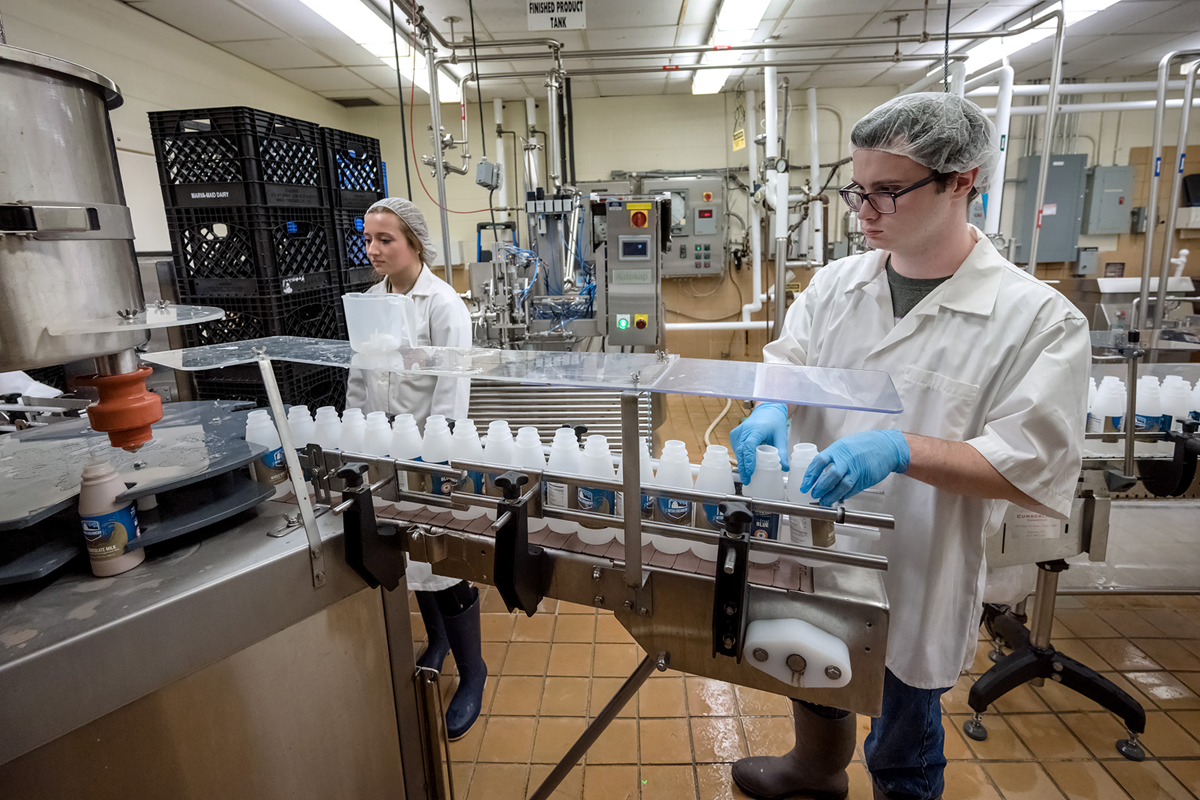