McPhee: 'All of us have respon.. 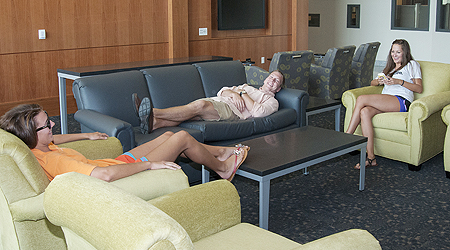 “I’ve been watching the construction for over a year now. I’m really proud to be associated with the school.

“I just walked through the dining area,” added Schrader, who is majoring in information systems in the Jennings A. Jones College of Business. “It looks pretty big. I noticed a hot-dog stand that looks good.”

As the day progressed, more people could be found browsing around the three-story, 211,000-square-foot facility that university leaders predict will become the heart of campus.

Miller purchased textbooks and supplies in the new Phillips Bookstore.

“There were a lot of people in there to help you,” she said. “I’m excited to see what else is in the building.

“MTSU has grown so much in the last decade. It’s great to see all the new, wonderful things going on.”

Sade Baker, a senior marketing major from St. Louis, said it was “very exciting to see a lot of changes” while walking through the facility with friend Bridget Buckles, a 2010 MTSU graduate.

“I look forward to the new freshman class coming in and enjoying it,” Baker added. “I saw the game room and thought, ‘Oh, wow. They’ve got a game room — a place to hang out.’

“The KUC (Keathley University Center) always seemed so congested and crowded. Here, you can locate an office much easier, and it has an elevators and TVs.”

The opening coincides with an already full weekend as students and faculty return to campus to begin the fall semester and 2012-13 academic year.

“This building will create a greater sense of community for our students, a place where they can connect with the campus and with each other,” said MTSU President Sidney A. McPhee.

“It is a gathering place, somewhere to recharge, collaborate or simply unwind. We anticipate it will be a gathering point for many of our students who live off-campus. Such spaces enrich our campus by strengthening our student-centered learning culture.”

A public ribbon-cutting ceremony is set for 10 a.m. Wednesday, Sept. 19.

“The MTSU Student Union is an amazing facility that will serve our community well for many years to come,” said Sarah Sudak, associate vice president for the Division of Student Affairs and dean of students. She has overseen the project for student affairs and worked directly with Messer Construction, which began building the facility in 2009.

While the 45-year-old KUC Grill and food-court venues will remain open, the new facility will replace the KUC as the go-to place for students, faculty, staff and visitors.

“I’m just so excited about the future that the union represents for this campus,” said Dr. Deb Sells, vice president for student affairs and vice provost for enrollment and academic services.

“The new union will become the hub — the heart — of the MTSU community,” Sells added. “I suspect it will become a visible representation of the True Blue spirit, as faculty, staff and students come together to eat, meet, relax and socialize.”

The building features Phillips Bookstore; a 640-seat food court and 102-seat casual-dining restaurant; an 840-seat ballroom; student government, the Center for Student Involvement and Leadership and other offices; a parliamentary room; a theater; and a collaborative computer center.

“The comment heard most often (from students and parents this summer) was ‘I can’t believe how big it is!’” Sells noted. “For students who are used to the KUC — and for whom the KUC is the only frame of reference — the thought of a union that is actually a football-field-and-a-half long is almost more than they can fathom.

“And they confirmed that the way to a student’s heart is through the stomach — I heard lots of excitement about the opening of Dunkin Donuts and Popeye’s!”

“I like it. It’s a lot of space,” said Demetric Jones, a senior biology major from Memphis who works for the Office of Student Programming in the facility.

“I wish there was more seating on the second floor. I like the large exit space and the big stairwells. I like how big and spacious it is. I was concerned that it wouldn’t be able to accommodate all our students, but I believe it will.”

Sudak said interior and exterior construction will continue this fall.

“There will be ongoing work during the fall semester as the copy center is completed, landscaping is finished and furniture deliveries are completed,” she said.

In addition to the KUC, the 60-year-old James Union Building will remain open as a venue for events, classes, offices and an ARAMARK/MT Dining facility.

Students relax in one of the lounge areas of MTSU’s new Student Union Building on opening day.

Regular fall-semester operating hours for the new Student Union Building will be: