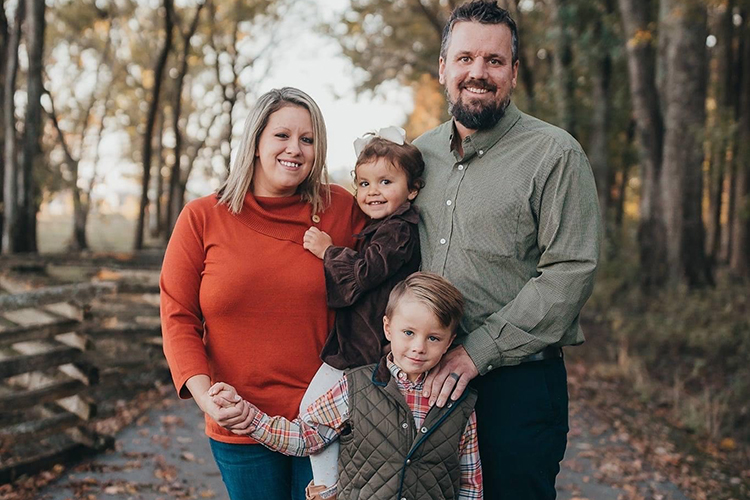 MTSU integrated studies major Nicole Ford, left, is scheduled to graduate this summer. The 33-year-old Murfreesboro resident and restaurant owner returned to MTSU after several years to finish her degree through University College’s flexible programs for working professionals. Pictured with her are husband Eric, far right, and their children Bailey Kate and Jackson, standing. (Submitted photo)

When you’re already running a business and parenting two young children, you’d have every reason to think it would be impossible to go back to college. Nicole Ford doesn’t make excuses, though, because she wants to prove to herself — and her kids — that anything is possible if you try hard enough.

“I have two kids, a 5-year-old and a 2-year-old,” she said. “I just have to find a way to get it done. Whatever it is, even if they’re running around and acting crazy, you just have to do it.”

Ford, now 33, has called Murfreesboro home for years, and she attended Middle Tennessee State University right out of high school. She switched majors several times, not sure what exactly she wanted to do next. After a little more than two years of classes, she decided to take some time to figure things out. Shortly after leaving MTSU, Ford and her husband, Eric, took over a restaurant — Goodness Gracious at the Readyville Mill.

She soon realized that she could benefit from some more education to help manage the demands of running a business, and she started thinking about returning to MTSU. Five years after leaving the classroom she returned to the Blue Raider community.

“I wanted to grow as a business owner,” Ford said. “I also wanted to show my son that getting a degree was valuable.”

At first, she still wasn’t sure what she wanted to major in, torn between studying business or hospitality and tourism. Finally, she found the solution — the Integrated Studies degree through University College, which allows students to build their own degree and choose classes from different majors. Classes are typically available both on-campus and online.

“It was perfect because I could choose between two areas of focus,” she said. “I learned so much from both of those areas and it’s helped me grow as a professional.”

Many adult students, since they’re working in their field already while attending college, often take lessons they’re learning in class and apply them in the workplace almost immediately. Ford has one of those stories too: In one class, she was asked to create a manual for a workplace that included details about training and other aspects of working in the restaurant.

“I was able to give that manual to my servers because we actually didn’t have that at the time,” Ford said. “The lesson in class was perfectly relevant to what I was doing at work every single day.”

Ford says she is taking things more seriously this time around with her classes, and she thinks that applies for a large majority of adult students enrolled right now.

“You care more about what you are applying and care more about doing a good job,” she said. “I have to put my focus to what is most important, and right now that is finishing this degree.”

Set to graduate this summer, Ford says she is “beyond words excited.” She is excited to share the moment with her entire family, and especially her kids.

As for the future, Ford said she is not exactly sure what it holds for her after graduation. One thing she does know for sure, though, is that she’s walking into a world of possibilities now that she’s finished her degree.

If you are interested in finishing what you started, visit MTSU.edu/finishnow.