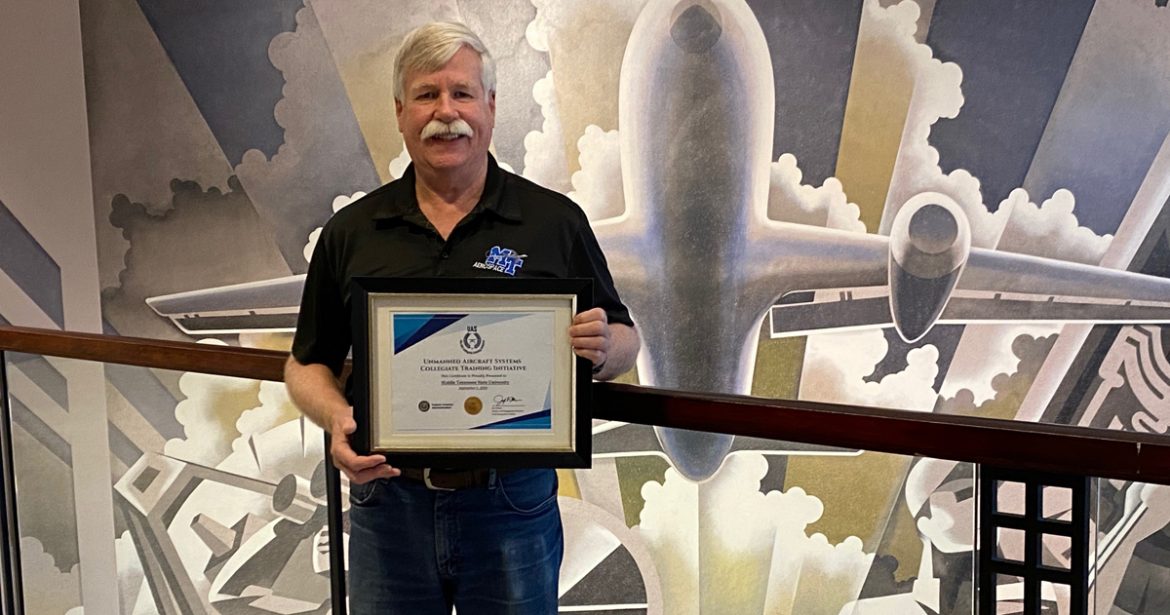 The Middle Tennessee State University Department of Aerospace’s Unmanned Aircraft Systems Operationsprogram is navigating the first year of a new partnership with the Federal Aviation Administration.

Last fall, the FAA announced it had selected MTSU for the UAS Collegiate Training Initiative program. 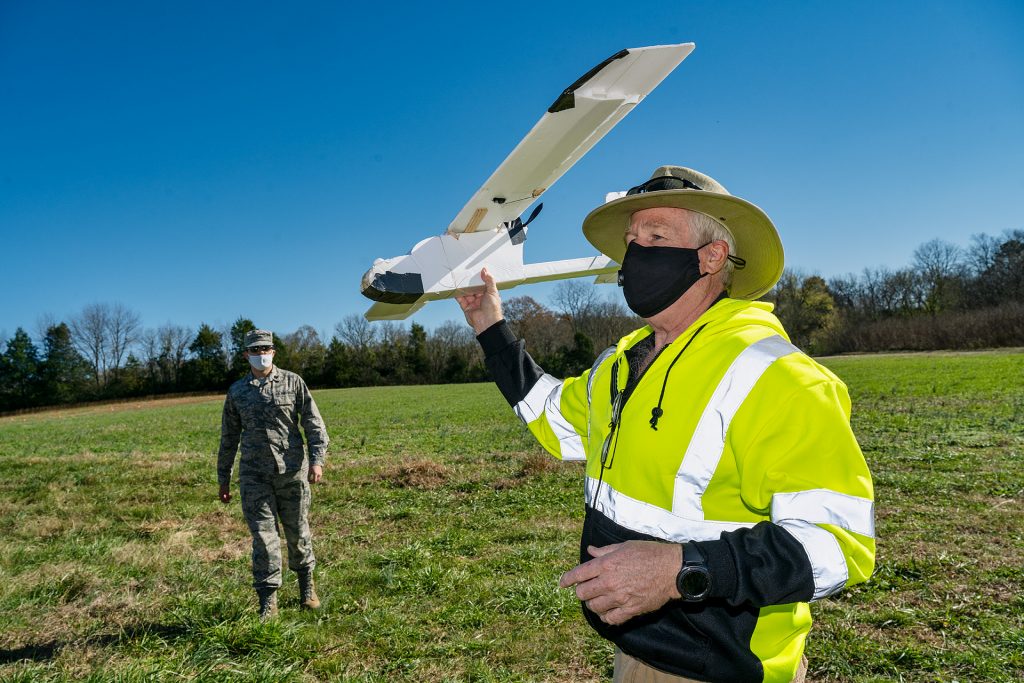 Kevin Corns, assistant professor in the Department of Aerospace, is shown with students flying their Unmanned Aircraft Systems drones at the MTSU Farm in Lascassas, Tenn. He said this is a fixed-wing drone they built in an upper-division UAS Operations program class. (MTSU photo by Andy Heidt)

The FAA’s UAS Collegiate Training Initiative program recognizes institutions that prepare students for careers in unmanned aircraft systems, commonly referred to as drones. In order to qualify for the initiative, schools must offer a bachelor’s or associate degree in UAS or a degree with a minor, concentration or certificate in UAS.

“We are honored to continue that partnership by being selected to participate in this FAA initiative,” said Kevin Corns, assistant professor of aerospace and MTSU UAS Operations director.

“This partnership with the FAA reinforces our commitment in the UAS Operations program to provide leading-edge education and training opportunities to our students to ensure they have the necessary knowledge, skills and abilities to safely operate in the National Airspace System,” Corns added.

MTSU College of Basic and Applied Sciences Dean Bud Fischer said the FAA’s selecting MTSU to the FAA UAS Collegiate Training program “indicates they recognize the effectiveness of our program in preparing students for careers in the unmanned aircraft systems industry.”

“Through this selection, the FAA is certifying MTSU has one of the outstanding UAS programs in the country and that our MTSU graduates are exceptional candidates for careers in the UAS field,” Fischer added.

Corns said MTSU has had a long history of partnering with the FAA through the Air Traffic Control Collegiate Training Initiative to prepare aerospace students to work for the FAA as air traffic controllers.

• There are 71 students majoring in the Unmanned Aircraft Systems Operations concentration.

• 34 students have graduated from the MTSU program.

• The Tennessee Board of Regents approved the program in 2015. 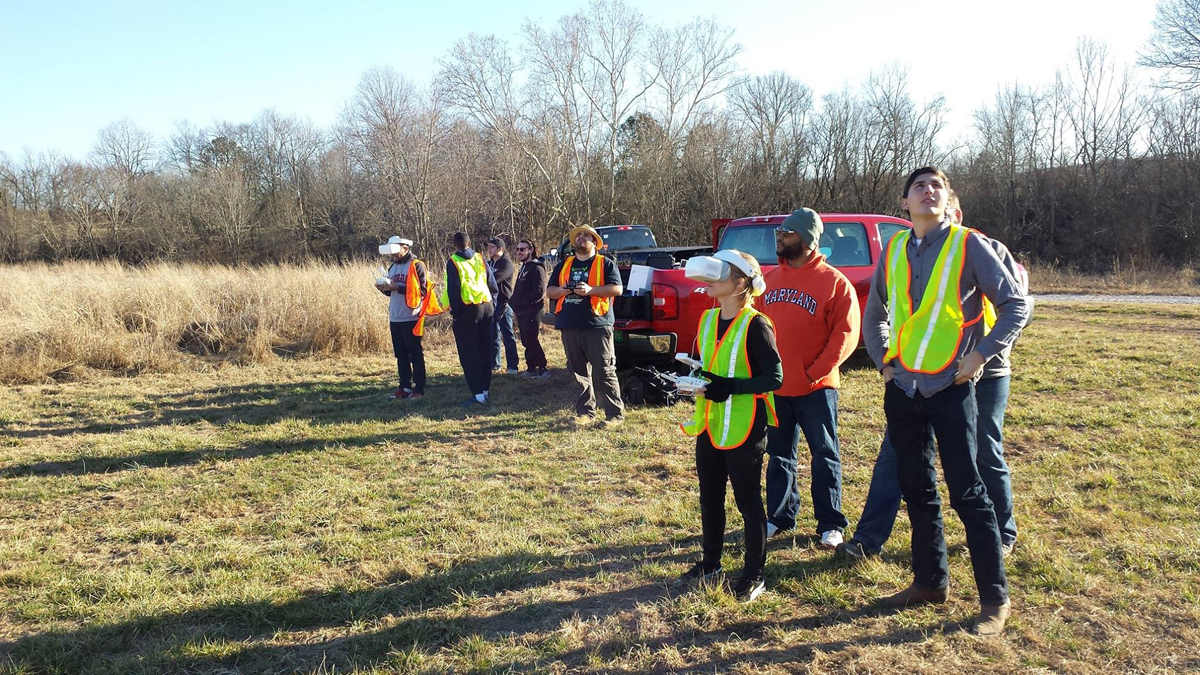 One of the many students who will benefit from the FAA-MTSU partnership is Cat Bradley, 30, of Murfreesboro, a fifth-year senior scheduled to graduate in May with UAS and Japanese language degrees.

“Students coming into the UAS program now have access to materials and technology that set us apart from other schools, and this is another notch in that belt,” said Bradley, who has a 3.78 GPA. “The FAA UAS Collegiate Training Initiative  program, for me, is another step toward proving how valuable a degree is from MTSU in Unmanned Aircraft Systems Operations.”

“Our professional pilots are already well known for their skill in the industry thanks to MTSU’s focus on safety and experience, and I am proud that we are beginning to receive the same recognition,” she added.

“Anyone can walk into Best Buy, purchase a drone and be up and flying the same day. Because of this, there is a stigma surrounding UAS pilots, and a degree from MTSU carries more weight in the professional world as a result. The FAA UAS Collegiate Training Initiative program is proof to employers that our students are safe, trained and professional.”

When she was younger, Bradley “loved taking apart and building computers and later smartphones, but I did not consider a STEM (science, technology, engineering and math) career until I started taking programming classes.”

Bradley “found MTSU’s UAS program through an online friend who was studying accounting at MTSU, and I knew that was the path I wanted to take,” she said. “After researching the use of unmanned aircraft in disaster relief and agriculture, I immediately applied and moved from Texas to Tennessee that summer.”

Corns came to MTSU in fall 2016, the same semester Bradley enrolled after transferring from Navarro College in Corsicana, Texas, where she was a music major “with no aviation experience,” she said. He approached her to be a research assistant.

“I do a little of everything there, but my big projects generally focus on programming/modifying our software to suit our needs,” she said. “We have a lot of new technology coming in, so there’s always something to work on between our 3D printers, new aircraft, new transmitters, new flight software and more.”

“I am the go-to for setting up and fine-tuning our technology,” Bradley added. “I also grade the discussion board posts for the intro to Unmanned Aircraft Systems course. Occasionally I will pick up a paid job for instructing or flying UAS. This semester, I will also be acting as a mentor to high school students with Sage College in Spain. They are working to build a drone that will measure environmental pollution in their area.”

‘MTSU experience could not have replicated anywhere else’

Meanwhile, Bradley inherited many Japanese language books from her grandfather, who was stationed in Japan during the Vietnam War. She began taking Japanese courses. Corns suggested she study abroad. In 2019, she left for Toyo University in Tokyo. She’s made connections with other UAS pilots and educators in Japan, and hopes to return in the future.

Bradley’s sung with the MTSU Women’s Chorus and played the guzheng for the Chinese Music Ensemble.

“My time at MTSU has been an incredible experience that I could not have replicated anywhere else,” Bradley said. Through the UAS program, she takes classes with the photography, film, GIS (geographic information systems), electronic engineering and computer science departments.

“In each of these departments, there have been motivated and empathetic professors who are passionate about the classes they teach and understand how their courses apply to us as students of the Aerospace Department,” she said. “Most of these courses have at least one assignment that can be applied toward a portfolio that is valuable in multiple areas of aviation.

Bradley has “lots of options” after graduating, thanks to “how quickly the UAS industry is growing,” she said. They include graduate school at MTSU or the University of Washington, and she’s also been in contact with U.S. and Japanese aviation companies. 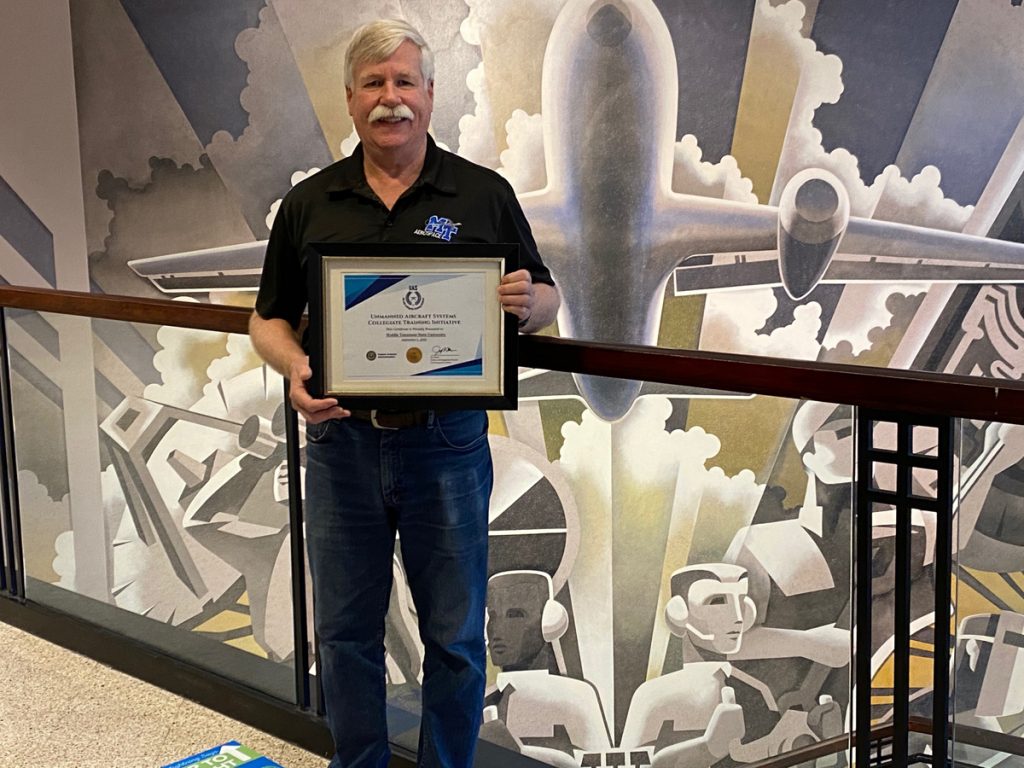 Kevin Corns, MTSU UAS Operations director and assistant professor in the Department of Aerospace, holds the certificate sent by the FAA, acknowledging the Collegiate Training Initiative program that the aerospace department is now a part of since September. The program recognizes institutions that prepare students for careers in unmanned aircraft systems, commonly called drones. (MTSU photo by Mary Lou Cornett)