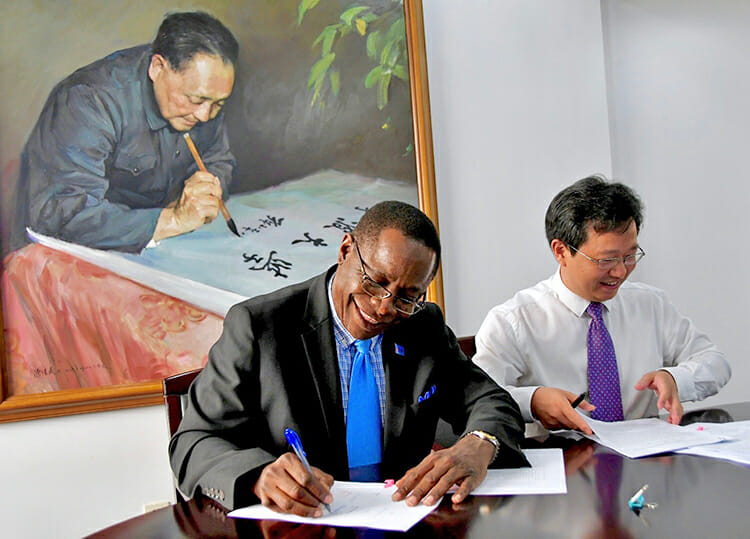 MTSU President Sidney A. McPhee and Shao Qianium, vice president of Ningbo University in China, agreed to extend the Joint Mathematics and Applied Mathematics Program, established in the fall of 2012, for 10 more years.

Ningbo students selected for the program first attend classes taught by MTSU faculty on the Chinese university campus, then progress to Murfreesboro to finish their studies. Successful students receive degrees from both MTSU and Ningbo University.

The program can accept up to 40 students each academic year.

“This partnership with Ningbo University is a model for effective and productive international academic cooperation,” McPhee said. “It leverages our respective strengths to provide unique opportunities for exceptional students.”

MTSU, through its College of Basic and Applied Sciences, is the only Tennessee university offering actuarial science coursework for both undergraduate and graduate degrees.

Students take courses in mathematics, statistics, economics, and insurance designed to help prepare for preliminary examinations from the actuarial professional societies and to prepare them for success in the field.

McPhee touted one such success, singling out Yiting Dong, who passed her certification exams by the Society of Actuaries before receiving her undergraduate degree from MTSU. It is only the second time an MTSU student has achieved this honor before graduation.

Yiting is set to graduate again from MTSU in August, this time earning a master’s degree in professional science with a concentration in actuarial science.

Shao said students in this joint program are poised for careers in insurance, finance, investment and banking, as well as government and social agencies.

Ningbo, founded in 1986 and with an enrollment of about 25,000 students, is located in the eastern coastal province of Zhejiang, next to the East China Sea.

MTSU has about 1,500 international students, with about 300 hailing from China. Increasing international undergraduate and graduate enrollment and joint research opportunities, particularly in China, is a strategic focus of the university, McPhee said.

Friday’s ceremony took place as McPhee was leading a delegation of Nashville-area schoolchildren, teachers and parents in country for two weeks as part of a reciprocal educational exchange between MTSU and Dongcheng Educational Group.

MTSU President Sidney A. McPhee, left, and Shao Qianium, vice president of Ningbo University in China, sign papers that renew the academic partnership between the two institutions. Behind them is a portrait of the late Chinese leader Deng Xiaoping, inscribing on a scroll the name of Ningbo University at its founding in 1986. (MTSU photo by Andrew Oppmann)