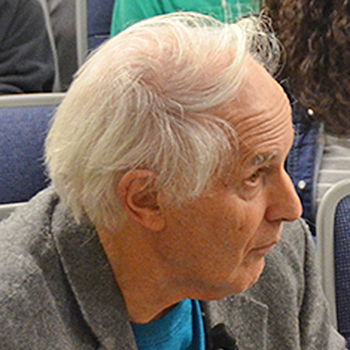 Harry Kroto utilizes a PowerPoint presentation to bring his message to the audience attending the first public lecture in the new Science Building Oct. 20. Kroto earned the 1996 Nobel Prize in Chemistry, sharing the award with two other men for their discovery of fullerenes, a series of carbon molecules, also known as “Buckminsterfullerenes.” (MTSU photos by News and Media Relations)

But at MTSU and virtually anywhere he goes nowadays, the dialogue is more about science in general, science education for young people and creativity rather than the Nobel Prize in Chemistry.

At the invitation of MTSU chemistry professor Preston MacDougall, Kroto spoke at both the MTSU event to a near-capacity crowd Oct. 20 in the Science Building amphitheater and an overflow crowd attending the Oct. 16-19 American Chemical Society Southeastern Regional Meeting in Nashville.

“I want to tell students what science actually is,” said Kroto, 75, an English-born chemist who has been part of the Florida State University faculty since 2004.

“Science is not well understood. It’s a way of thinking, as much as anything else, about the world and what is actually true and correct. It’s the way the universe is.”

“What I like about science is the internationality of it,” Kroto told his captivated audience during his humorous and entertaining talk titled “Carbon and Nano in Outer Space.” International citizens are a part of his present and past research teams.

The crowd — MTSU students, faculty, staff and administrators including President Sidney A. McPhee, and people from the community — enjoyed his lecture and PowerPoint presentation.

“It was absolutely inspiring as a young chemist to see someone who is so passionate about everything they do,” said MTSU senior biochemistry major Robbie Mahaffey of Shelbyville, Tennessee.

“He was amazing. My professor asked me if I was going to be here. I had planned to study because I have an exam Wednesday, but this seemed like an opportunity not to miss, to hear someone speak who had won a Nobel Prize and has years of experience and wisdom to give out for free.”

Henry Bradley, a senior biochemistry major and MTSU Chemistry Club president from Newport, Tennessee, had the honor of introducing Kroto and spending time with him earlier in the day.

“I think it is such a privilege to represent the student body and introduce Sir Harry Kroto,” Bradley said.

“It’s not every day when someone who wins the Nobel Prize comes to your school. They obviously did something to advance human knowledge.”

The Nobel Prize in Chemistry is awarded annually by the Royal Swedish Academy of Sciences to scientists in various fields of chemistry.

Kroto shared the 1996 Nobel Prize with Robert F. Curl Jr. and Richard E. Smalley for their discovery of fullerenes, a series of carbon molecules, also known as “Buckminsterfullerenes.”

The creative side of Kroto indulges in highly effective graphics and logos.

“To be creative, you need freedom,” he said during his talk. “For me, creativity is not just pulling a new rabbit out of the hat. It’s bringing things from various areas together in a new way, sort of a synthesis.”

“At least 50 percent of my time now is trying to get universities such as MTSU to consider how modern communication techniques can be helpful to not only the university in teaching but also to the students, to the propagating of their careers,” he said.

“It turns out that students are very good at contributing to GEOSET,” Kroto added. “”We’re recording short presentations on projects by students on things that fascinate them. And they’re getting jobs and scholarships and awards because we’ve essentially revolutionized the resume by including a recording (through the URL link) in the resume.”

Earlier Oct. 20, Kroto toured the Science Building and visited the Discovery Center at Murfree Spring, where CEO Tara MacDougall, wife of MTSU faculty member Preston MacDougall, presented Kroto with aDiscovery Center T-shirt that he wore the rest of the day.