Environmental journalism is to.. 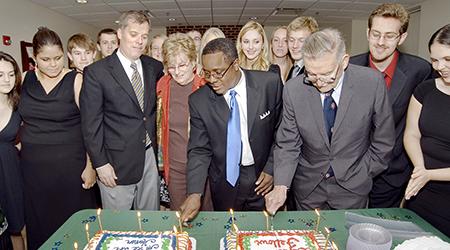 Buchanan, a 1940 graduate of Middle Tennessee State University and a Rutherford County, Tenn., native, received the 1986 Nobel Memorial Prize in Economic Sciences for his leadership in developing the public choice theory of economics.

Of receiving the Nobel award, Buchanan once wrote: “If Jim Buchanan can get a Nobel Prize, anyone can. Recognition and acceptance of this simple truth are very important.”

Buchanan is the only MTSU alumnus so far to win the honor.

“The university mourns the loss of Dr. James Buchanan, whose legacy as a scholar in economics, Nobel laureate and educator will live on as the namesake of our most prestigious academic honor, the Buchanan Fellowship,” said MTSU President Sidney A. McPhee.

“Dr. Buchanan, born in rural Rutherford County, always treasured his Tennessee roots and was a proud alumnus of our university. His passion for economic theory was ignited by a professor on our campus, and his generosity to MTSU has allowed many more students to find their calling.

“His continued involvement and connection to this University brought honor to our institution. We are forever in his debt.”

A stridently independent thinker, Buchanan earned the Nobel for “his development of the contractual and constitutional bases for the theory of economic and political decision-making.” Within the economics discipline, his contribution is known as the field of Public Choice, which brings the tools of economic analysis to the study of public decision making.

His book, The Calculus of Consent: Logical Foundations of Constitutional Democracy, which he co-authored with Gordon Tullock, is considered a classic work on public choice theory.

After he received the Nobel Prize, Buchanan continued to write and lecture on his interests around the world into his 94th year. He lived in Blacksburg, Va., and was married to the late Anne Bakke Buchanan, who died in 2005.

In 2006, McPhee established the Buchanan Fellowship program in the University Honors College intended to attract top scholars from across the state and country. Only 20 applicants each year are selected as Buchanan Fellows, the highest academic award given to an entering MTSU student.

Rutherford County author and MTSU emeritus professor in economics Reuben Kyle will soon release a book, From Nashboro to the Nobel Prize: The Buchanans of Tennessee, with proceeds going to the Buchanan Fellows program.

The grandson of Tennessee Gov. John P. Buchanan, James M. Buchanan grew up on a Depression-era farm in the Gum community of Rutherford County. He attended Buchanan School, which was named such because it was built on land once part of the Buchanan family farm.

In his book of personal essays, Better Than Plowing, the down-to-earth Buchanan pointed out that his family’s humble roots instilled within him a strong work ethic — he earned money for college books and fees by milking cows — that set the stage for his distinguished career.

Buchanan graduated in 1940 from what was then Middle Tennessee State Teachers College with majors in mathematics, English literature and social science. He went on to a graduate fellowship at UT-K and an economics fellowship at Columbia University.

Duty to country called during World War II, and Buchanan entered officer training in the U.S. Navy ROTC program, eventually serving on the staff of Adm. Chester Nimitz in Hawaii.

Following his Naval service in the Pacific, Buchanan earned his doctorate from the University of Chicago.

The prolific scholar and author would serve later as the advisory general director of the Center for Study of Public Choice at George Mason University in Fairfax, Va., where he also served as a distinguished professor emeritus.

Speaking at the MTSU spring commencement in May 2000, Buchanan challenged graduates to question the day’s political leadership, which seemed to lack the Middle Tennessee values he held so dear.

“An open politics makes no distinction between the Ivy Leagues and the bush leagues when it comes to telling us what we want our government to do. The people, yes, but all the people, treated as equals, and not some more equal than others. Along with this attitude, there is an abiding mistrust in allowing others, no matter whom, to control too many elements of our lives.”

During Buchanan’s visit to campus in 2000, then-MTSU President James Walker made Buchanan the third recipient of the MTSU President’s Award, which recognizes those who have distinguished themselves through exemplary service to MTSU; extraordinary contributions to education, the community or society; or remarkable professional achievement.

An announcement regarding memorial services is pending.

You can listen to a brief audio clip of Buchanan, along with two other MTSU-affiliated Nobel winners, at http://mtsu.edu/news/podcast/2012/MIAM_23.mp3.