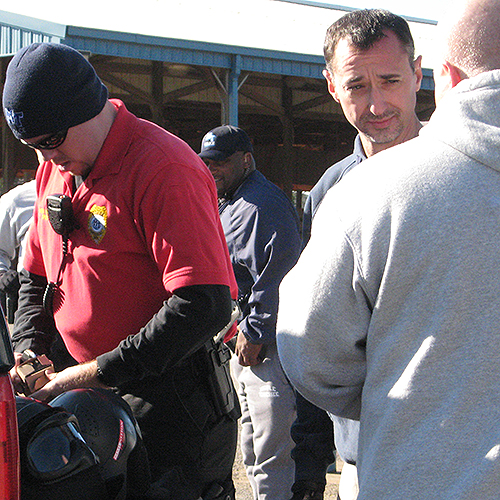 MTSU’s Department of Public Safety officers incorporate the latest technology and techniques into their ongoing training, but their bottom line is to de-escalate a dangerous situation when possible.

“It takes a whole lot of time to plan something like this, and then it’s over in three minutes,” said Patrol Lt. Brett Huskey, who helped lead the Jan. 7 training inside Ezell Hall, a former dormitory now used for campus offices, and outside the Tennessee Livestock Center.

“In an ‘active-shooter’ scenario or a domestic violence scenario, we’re constantly looking at a ‘shoot/don’t shoot’ situation, but we’re also teaching our officers how to de-escalate a situation whenever possible.”

The exercises, which were held each morning from 8 to noon, included police vehicles, sirens, lights and weapons with simulated ammunition. Officers took turns portraying suspects who had barricaded themselves into dorm rooms or rolled out of stopped vehicles with guns blazing.

Or, in this case, popping. Officers used Simunition brand non-lethal training ammunition, produced by General Dynamics of Quebec, Canada, in their training weapons.

The ammunition, which looks like rubber bullets filled with blue paint, fits into specially reconfigured Glock handguns. It still packs a wallop and, like all simulated ammunition, can be deadly if it hits just right, which is why officers wear full safety gear, including helmets and body armor, during the exercises.

After the first morning’s exercises, officers sported welts on fingers, knees, arms and legs — as well as paint smears on their helmets, shirts and jeans — from the fake bullets. One officer took a direct hit to the chest at point-blank range and had to sit down for a few moments to catch his breath and gather his thoughts.

“We want this to be as realistic as possible,” explained Lt. Jason Wofford, who led the first day’s effort with Huskey. “This kind of situation is always on our minds.”

Huskey noted that this month’s training is the first time the department has been able to use the simulated ammunition on campus.

“We do a lot of this training throughout the year, but we have to go off-campus to do it,” he explained. “This time, because of the (winter) break, this was the first time we’ve been able to use Ezell, which simulates a typical dorm.”

The MTSU Department of Public Safety currently employs a force of 35 full-time police officers, five full-time dispatchers and about 20 part-time student workers. It operates around the clock to protect the 500-plus-acre university campus and its 28,000-plus occupants.

All MTSU officers are graduates of accredited law enforcement training academies and are required by Tennessee law to undergo at least 40 hours of in-service training each year. This campus exercise is part of that required annual training.

The department alerted the campus community and area neighbors before the training “so that our activities don’t cause any uneasiness,” said Sgt. Broede Stucky, the department’s training coordinator.

For more information about MTSU police, visit the department’s website at http://police.mtsu.edu.