Best Places to Study on Campus 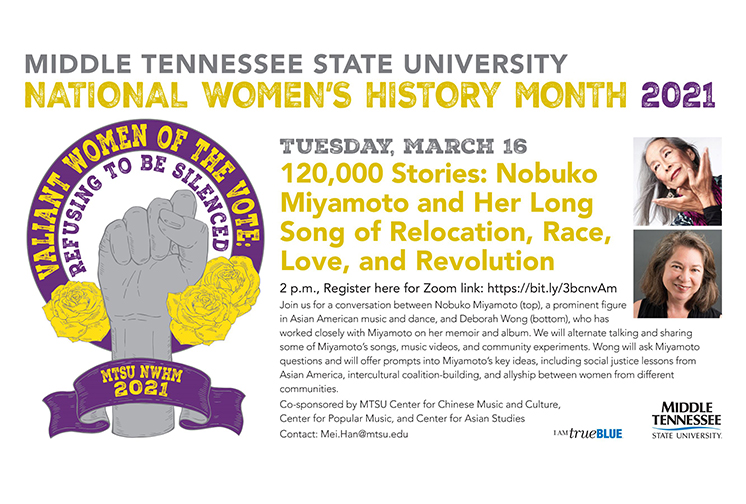 An Asian American singer and dancer who uses her talent to bring people of diverse cultures together will share her life’s work as part of MTSU’s National Women’s History Month celebration.

“120,000 Stories: Nobuko Miyamoto and Her Long Song of Relocation, Race, Love and Revolution” is scheduled for 2 p.m. Tuesday, March 16. To register for the Zoom link, go to https://bit.ly/3bcnvAm.

Deborah Wong, who has worked with Miyamoto on her memoir and latest album, will join Miyamoto in a conversation about her songs, videos and community projects, social justice lessons from Asian America, intercultural coalition-building and allyship among women from different communities.

“The voices of Asian artists are seldom heard in this country,” said Mei Han, director of MTSU’s Center for Chinese Music and Culture. “The life and struggles of women of color like Nobuko Miyamoto are those of survival, perseverance and success. Her stories are powerful and inspirational, and through them we can gain a new perspective of both the people around us and ourselves.”

Miyamoto, a prominent figure in Asian American music and dance, creates projects with communities using music, theater and dance. In 1978, she founded Great Leap, a Los Angeles-based arts organization which “uses art as both performance and creative practice to deepen relations among people of diverse cultures and faiths and to transform how we live on the earth,” according to its mission statement.

After a career dancing on Broadway and in films such as “The King and I,” “Les Girls,” “Flower Drum Song” and “West Side Story” under the stage name Joanne Miya, Miyamoto was drawn to the counterculture movements of the 1960s.

Following the murder of an attendee at the Japanese American Citizens League, she co-organized a memorial fundraiser and toured the country singing protest songs with musician Chris Iijima.

With Iijima and Charlie Chin, Miyamoto wrote, performed and recorded “A Grain of Sand: Music for the Struggle by Asians in America,” the first album of Asian American music, in 1973.

Under Miyamoto’s direction, Great Leap has produced “Eco-Vids,” a series of environmental music videos, and “What Can a Song Do?,” a touring lecture/performance project. Great Leap’s latest endeavors also explore the intersections of cultures and faiths and questions of identity.

Miyamoto’s honors include the Ford Foundation’s Leadership for a Changing World Award and the California Arts Council Director’s Award for her contributions to the arts in California.