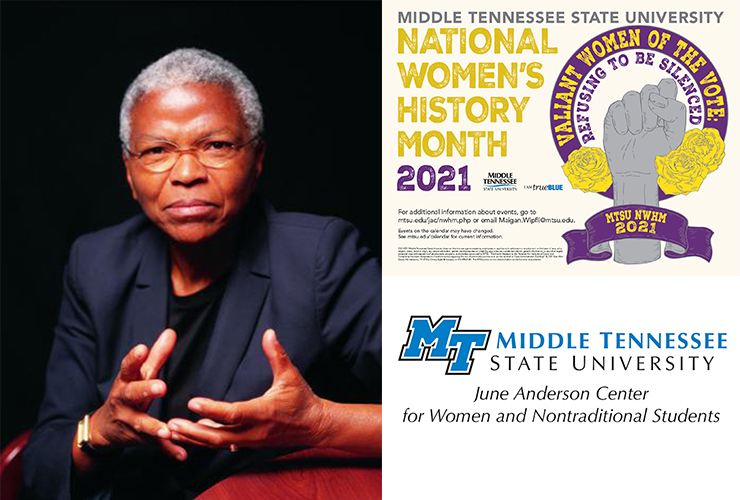 A veteran activist against sexism and racism both in and out of government will deliver the keynote address for MTSU’s celebration of National Women’s History Month.

There are 500 slots available for the videoconference, and attendees will be able to post questions during the Q&A session.

Berry was a member of the U.S. Commission on Civil Rights from 1980 to 2004 and served as chair from 1993 to 2004. During her tenure, at the behest of President Jimmy Carter, Berry initiated a comprehensive affirmative action study. It recommended timetables for reversing discrimination of Black people and women, especially in the workplace.

When Ronald Reagan, an affirmative action opponent, became president, he tried to fire Berry and two other commissioners who criticized his policies.

Berry joined one of those commissioners, Blandina Cardenas Ramirez, in suing President Reagan in federal court and won the right to keep her seat on the commission.

Maigan Wipfli, chair of the National Women’s History Month Committee and director of the June Anderson Center for Women and Nontraditional Students, said Berry had been scheduled to speak last year in celebration of the 100th anniversary of the passage of the 19th Amendment.

“With her background in activism, voting rights, education and discrimination policy, she was the perfect choice to speak for the 100th year of suffrage last year,” Wipfli said. “Unfortunately, due to COVID, we had to cancel her on-campus speaking engagement last year for us. She and her agency worked with us to find a new date and time for this year. We are beyond excited to hear her speak.”

Since 1987, Berry has served as the Geraldine R. Segal Professor of American Social Thought and a professor of history at the University of Pennsylvania in Philadelphia, Pennsylvania.

She teaches the history of American law and the history of law and social policy. She also serves as an adviser to students on African American history and legal history.

Berry is the author of 12 books, including “Five Dollars and a Pork Chop Sandwich: Vote Buying and the Corruption of Democracy” and “Power in Words: The Stories behind Barack Obama’s Speeches, from the State House to the White House,” co-authored with Josh Gottheimer.

This event is sponsored by the MTSU Distinguished Lecture Committee, the Murfreesboro branch of the American Association of University Women and the MTSU President’s Commission on the Status of Women.