Musicologist has ear for futur..

MTSU Theatre brings the fun with comic ‘Noises Off...

MTSU Theatre brings the fun with comic ‘Noises Off!’ 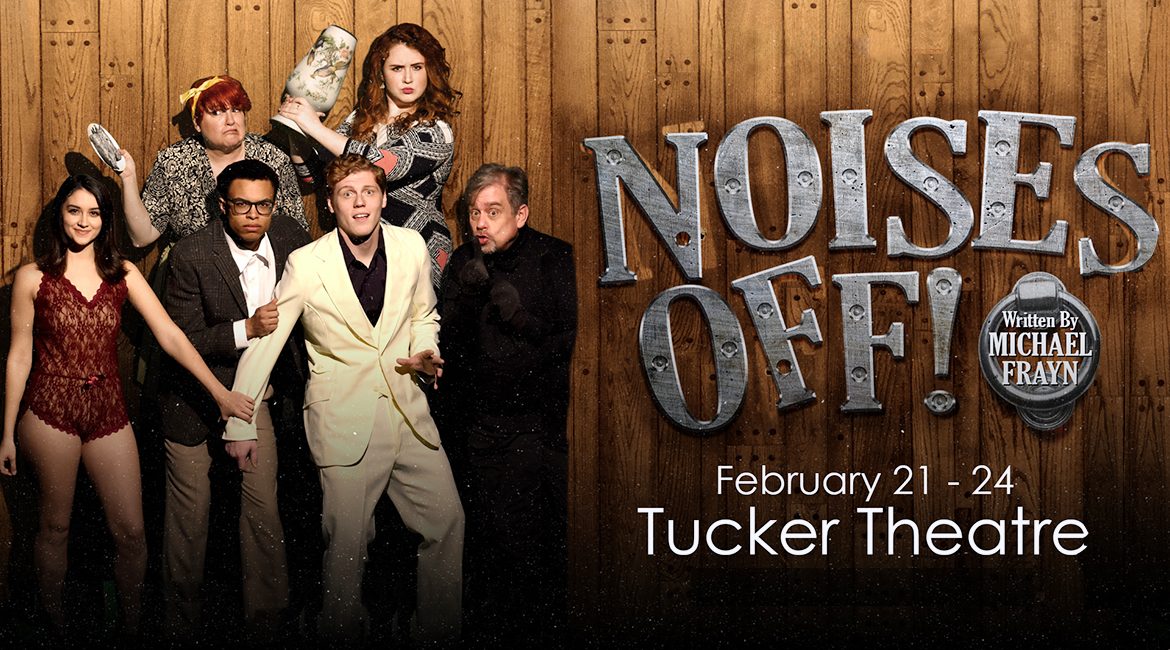 MTSU Theatre students are bringing the noise and the farce to Tucker Theatre audiences Feb. 21-24 with a rambunctious production of the British-turned-Broadway stage classic “Noises Off!” 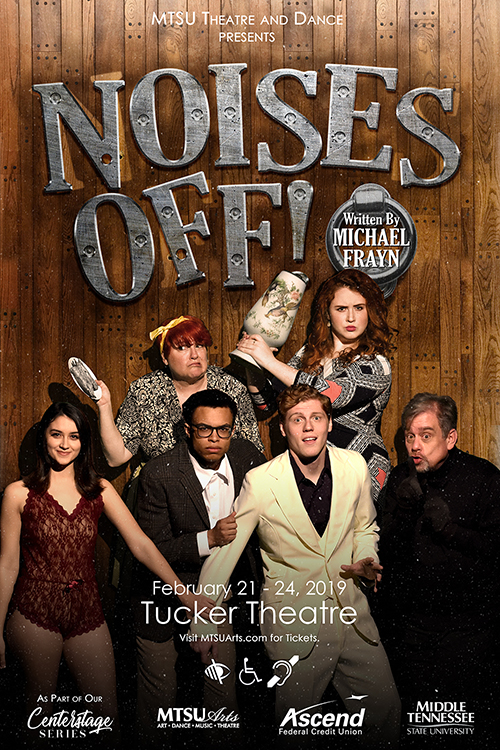 Curtain times are 7:30 p.m. Thursday-Saturday, Feb. 21-23, and there’s a 2 p.m. matinee Sunday, Feb. 24. Tickets, available now at MTSUArts.com and at the box office, are $10 general admission and $5 for K-12 students and senior citizens. MTSU students will be admitted free at the box office with a current ID.

Director and MTSU theatre professor Kristi Shamburger, who’s guided the university’s recent superstar musicals “9 to 5: The Musical,” “Joseph and the Amazing Technicolor Dreamcoat,” “Peter Pan,” “West Side Story” and “Les Misérables,” says this non-musical comedy’s cast and crew are doing their best to keep their faces straight and their bodies uninjured as they crash through rehearsals.

“We laugh a lot: at ourselves, at the play,” she jokes. “The play is ‘controlled chaos,’ as our friend Derek Whittaker, who’s playing Selsdon, said the other night in rehearsal. It will be wonderful if we’re able to keep the pace and control the chaos and therefore prevent any injury so everyone will have a night of fun and laughter!”

Newcomer Sandy Flavin, a Hermitage, Tennessee, resident and senior theatre major, echoes her director’s awe at the intricacy of comedic blocking and timing that the production requires.

“There are so many moving parts and people in the play that I have to be extremely organized so that I can concentrate on every element while on and off stage,” says Flavin, who’s making her MTSU debut in the dual backstage and on-stage roles of “Dotty Otley” and “Mrs. Clackett.”

“The staging is a delicate balance of organized chaos and fast-paced lines that must land on the audience in a way that will make them laugh out loud. Learning the intricate blocking is exceptionally challenging, time-consuming and essential.”

“Noises Off!” attempts to capture a theater troupe’s backstage bedlam that creeps out front as they put on a racy play. Each of the three acts depicts the interior performance at a different point in its 10-week run, showing the cast’s developing relationships from opening night to shambling end.

It originated in 1970 as British playwright Michael Frayn watched a performance from backstage of a farce he’d written for actor Lynn Redgrave, realizing that “it was funnier from behind than in front.” By 1982, he’d expanded it into “Noises Off!” and by 1983, it was on Broadway earning multiple Tony nominations.

“Every day I just get so excited to step into the rehearsal room because I know that each rehearsal is going to be even better than the previous one,” says Aaron Gaines, a senior theatre major from Chapel Hill, Tennessee, who’s portraying show director “Lloyd Dallas.”

“Everyone always has new ideas to bring to their characters, and we’re all building history and strong relationships between the characters in our ‘Noises Off!’ world. I’m looking forward to the audience reaction to this show; even after several weeks of rehearsing, I’m still finding key points extremely hilarious, and I hope the public will do the same and enjoy themselves.”

A complete list of the cast and crew is available here.

“This is a fantastic cast, really talented, and they are working so diligently. I also have a wonderful production and design team that has really been on top of everything,” director Shamburger adds. “Their energy is delightful, and their ideas are inspiring. My experience at MTSU has been with musicals, so it’s fun to get to know some of the students who don’t typically sing and that I don’t often have a chance to work with on projects like this.

“We’re having a wonderful time putting this production together, and … we hope that everyone gets to come to the theater and be thoroughly entertained!”

Tucker Theatre, located inside MTSU’s Boutwell Dramatic Arts Auditorium at 615 Champion Way, is fully accessible for people with disabilities, including those with hearing, vision and mobility impairments.

Tickets also will be available at the Tucker Theatre box office one hour before curtain times. For more information about the show, visit MTSUArts.com. 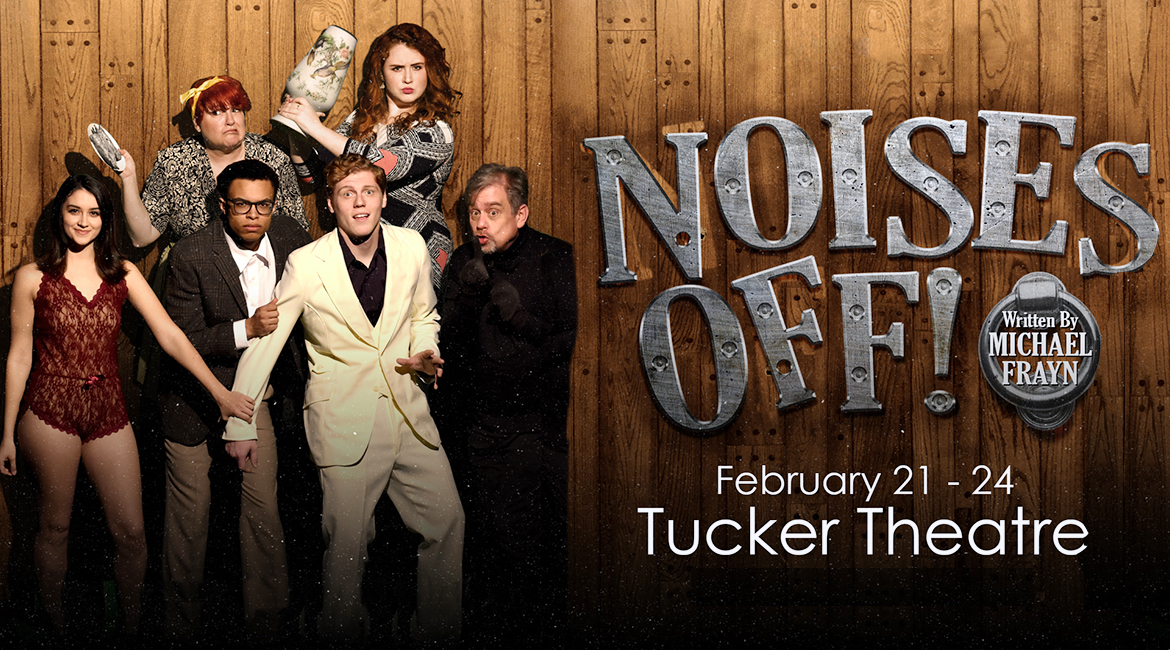 MTSU Theatre’s spring 2019 production of “Noises Off!” cast members are, from left on the front row, Alexa Pulley, Brandon Phillips, Nate Bumpus and Derek Whittaker; in the back row are Sandy Flavin and Sheridan Hitchcox. Not pictured are cast members Katlyn Marion and Aaron Gaines.