Dr. Dale Cockrell proves not all research and discoveries need occur in a laboratory setting 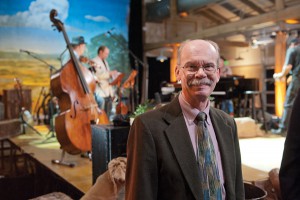 Musicologist Dale Cockrell is a scholar. He’s not used to the bright lights of a major television production. Nor is he used to being surrounded by musical legends like Ronnie Milsap and Randy Travis thanking him for the academic work he did to shed light on the old-time fiddle music ingrained in the American frontier experience.

No, Dale Cockrell is more comfortable digging through volumes of great American music or presenting a paper at a conference. But he couldn’t escape the bright lights and celebrity attention he received on a January night this year at the Loveless Cafe and Loveless Barn in Nashville, site of a PBS concert taping, the roots of which were watered by Cockrell’s scholarly sweat.

Cockrell, director of MTSU’s world-renowned Center for Popular Music, is the man behind the Pa’s Fiddle Project, an effort to reconnect generations of readers with the rich musical legacy woven into the Little House books written by Laura Ingalls Wilder.

Cockrell says his idea had a quite innocent beginning—reading at bedtime to his then-eight-year-old son, Sam.

“We read along, and there were songs embedded in the books. We would sing the songs, and if we didn’t know one, we would make up a song. Sam and I enjoyed that,” Cockrell says.

“But after a while, the scholar in me started to crawl into bed with us, and I started thinking about how there was an amazing amount of music in these books.”

Inspired, Cockrell sat down one Christmas break and started going through all of the books and listing the songs. He then began looking for existing recordings. What he found was that little had been done to chronicle or showcase these song references. Thus was born Pa’s Fiddle Project, dedicated to resurrecting and voicing the 127 songs found in the Little House books and making some great American music commercially available once again.

Cockrell established a record label, Pa’s Fiddle Recordings, to record the music referenced in the books. The label recently issued its third CD (out of a projected 10-CD series). The first was picked up by the National Endowment for the Humanities and sent to libraries nationwide as a sample of music making in 19th century American style.

The collections at the Center for Popular Music formed the foundation of the research that led to the music’s production. In all, Cockrell has spent 12 years on the project.

“Sometimes, it’s felt like we’ve been pushing that boulder up that hill every day,” he reflects. “Now we’re finally at the top and get to share this music with everyone.”

But how could Cockrell share the music with a broader audience? In June 2010, he attended a conference in Minneapolis called “LauraPalooza,” which was dedicated to all things Laura Ingalls Wilder. There, as scholars do at conferences, he delivered a paper—this one on Pa’s Fiddle Project. Afterward, he was approached by actor Dean Butler, who played the role of Almanzo, Laura’s husband, in the Little House TV series. Butler told Cockrell he thought the project would make a great pledge drive special concert for the Public Broadcasting System. The owner of a California-based production company, Butler pitched the project to PBS in New York and was successful in selling the network on the idea.

Adding to the occasion, MTSU students were behind the scenes to film Inside Pa’s Fiddle, a look at the inspiration, creation, and execution of the PBS special. The resulting documentary, sponsored by MTSU, is the product of a student crew led by Professor Tom Neff from the Department of Electronic Media Communication in the College of Mass Communication. (Neff happens to be the founder and former CEO of the Documentary Channel and an award-winning producer and director.) Many students were on site for the special, and many others worked in postproduction on editing, graphics and sound with Professors Clare Bratten and Matt Foley.

That the national PBS network would show such interest in Cockrell’s project indicates the ongoing, high level of fascination with the Little House world.

Cockrell believes the stories retain their popularity because they are based on real-life experiences and events—not fiction— of a family that homesteaded on the American frontier in the 1860s, ’70s, and ’80s.

“None of the people in the Ingalls family were superheroes,” Cockrell adds. “It goes against the grain of much children’s literature today. In fact, the books are pretty dark. Babies die, grasshoppers come and eat the crops, people get kicked off their land, houses burn down—they’re not books that are unremittingly cheerful. They are books about real life.”

Cockrell argues that the popularity of the books (and the TV series) might never have happened if it hadn’t been for the music references.

“To be in a family where you heard live music every day, for probably a couple of hours every day, printed itself upon Laura Ingalls Wilders’s brain in way that’s difficult for us to understand today,” Cockrell says. “Based on research by neuroscience and cognitive psychologists, my theory is that by remembering the songs that her father played and that she sang along to, it enabled her to unpeel the memories in which those songs [were] embedded. In doing so, she could start to write the stories that are about the memories of her family. Without the music, there may have been no Little House books.”

Though he’s admittedly a little uneasy about all the public attention he’s getting for his project, Cockrell is thankful for what’s happened.

“It’s enormously gratifying but also daunting, frankly,” he says. “As a musicologist, I’m not trained to get up on a stage in front of a PBS audience and communicate what I do as a scholar.

I’m being stretched and challenged in ways that I never expected. But I find it terribly exciting.”

Where does his project go from here? Cockrell’s goal is to take Pa’s Fiddle to grade schools nationwide, where he hopes the impact on kids will serve his even loftier expectations.

“I like to say that my goal is to change the music consciousness of the nation,” he says. “It’s kind of grand, but if 3rd- and 4th-grade students who come up against these books also learn the music that’s embedded in the books—Wilder expected that you’d know the music—then, in fact, you’ve inculcated a regard for [an] American musical legacy that’s not currently present in the consciousness of the nation.”

Cockrell is already at work on lesson plans for 3rd- and 4th-grade teachers. It’s just the next ripple of the scholarship he hopes will be felt far beyond the comfortable confines of his academic roost.