Fend off winter’s chill by pla..

MTSU Theatre is helping to turn its Tucker Theatre stage into a dystopian Dunsinane Feb. 6-8 when it collaborates once again with the nationally acclaimed Nashville Shakespeare Festival, this time on a new production of “Macbeth.” 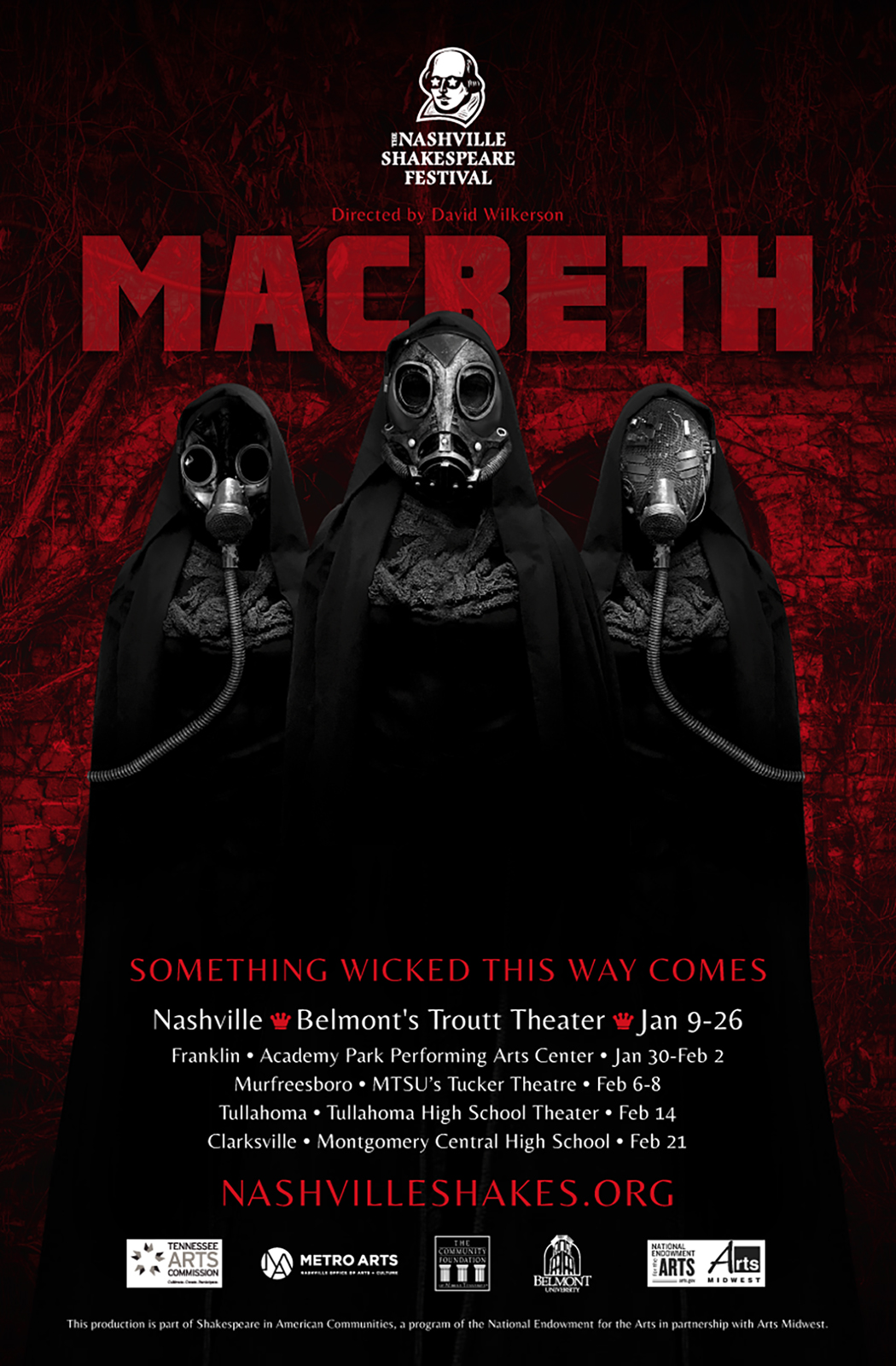 Directed by MTSU theatre lecturer David Wilkerson, this interpretation of the 16th-century tragedy takes a turn down an even darker timeline of one of Shakespeare’s most ominous classics and brings Festival favorite Sam Ashdown back to campus for the third year, this time as the Scottish general undone by bloody ambition.

Among those undoing him is 2017 MTSU theatre grad Delaney Keith, a Festival member who’ll return to Tucker Theatre as one of a trio of gas-mask-wearing witches brewing up a fog most foul and filthy air.

“This Macbeth is an exploration of those moments that tempt us to deny the humanity in others, thus throwing away a piece of our own,” said Wilkerson, who’s also edited the play’s text and co-choreographed the battle scenes to create a post-apocalyptic vision of prophecy, power, murder and madness.

“In this defiled world, our choices can ease the corruption and the power of the creatures that feed on it, or our actions can add to it.”

Wilkerson explains a bit more about his vision for this production in the NSF video below.

Curtain times are 7:30 p.m. Thursday-Saturday, Feb. 6-8. Advance tickets, available at www.mtsuarts.com and at www.nashvilleshakes.org, are $30 general admission, $27 for seniors 65 and older and $10 for all students. Tickets purchased online also will have a $1.50 charge; a $3 charge will be added to tickets at the door.

The “Macbeth” cast includes NSF veterans Mariah Parris as Lady Macbeth, Jordan Gleaves as Banquo and Brian Russell as Duncan. Keith, who’ll also portray the Porter, will be joined by Festival colleagues Kit Bulla and Natalie Rankin in the witches’ mini-coven and by Joy Greenawalt-Lay as Lady Macduff/Fleance and Andrew Johnson as Seyton.

Joining the company for the first time are Elyse Dawson as Macduff, DeYonte Jenkins as Ross, Jonathan Contreras as Lennox, Lucy Buchanan as Malcolm and Micah Williams as young Donalbaine.

The Nashville Shakespeare Festival troupe also will present 10 a.m. student matinees at Tucker Theatre for local schools Wednesday-Friday, Feb. 5-7. Each performance will include a brief conversation with the actors after the show.

The Nashville Shakespeare Festival teamed up with MTSU Theatre students and faculty in fall 2017 for a hugely successful joint production of “A Midsummer Night’s Dream,” then kicked off its 30th anniversary season in January 2018 with “Hamlet” with Ashdown in the lead at Tucker Theatre.

Tickets also will be available at the Tucker Theatre box office one hour before curtain time. For more information about the show, visit www.nashvilleshakes.org. 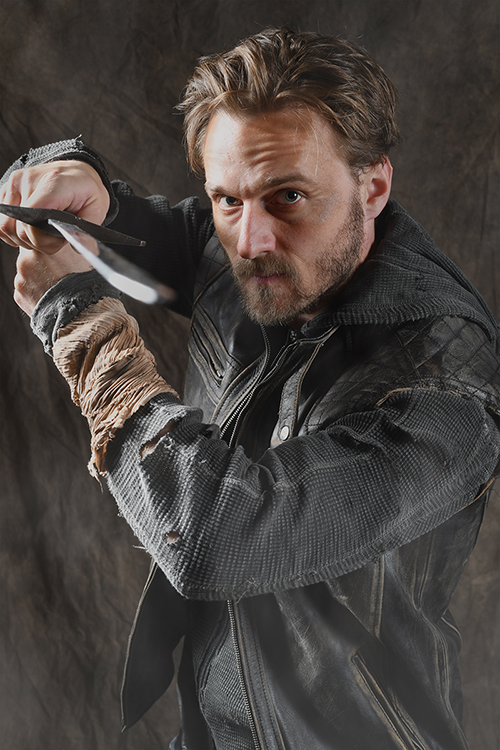 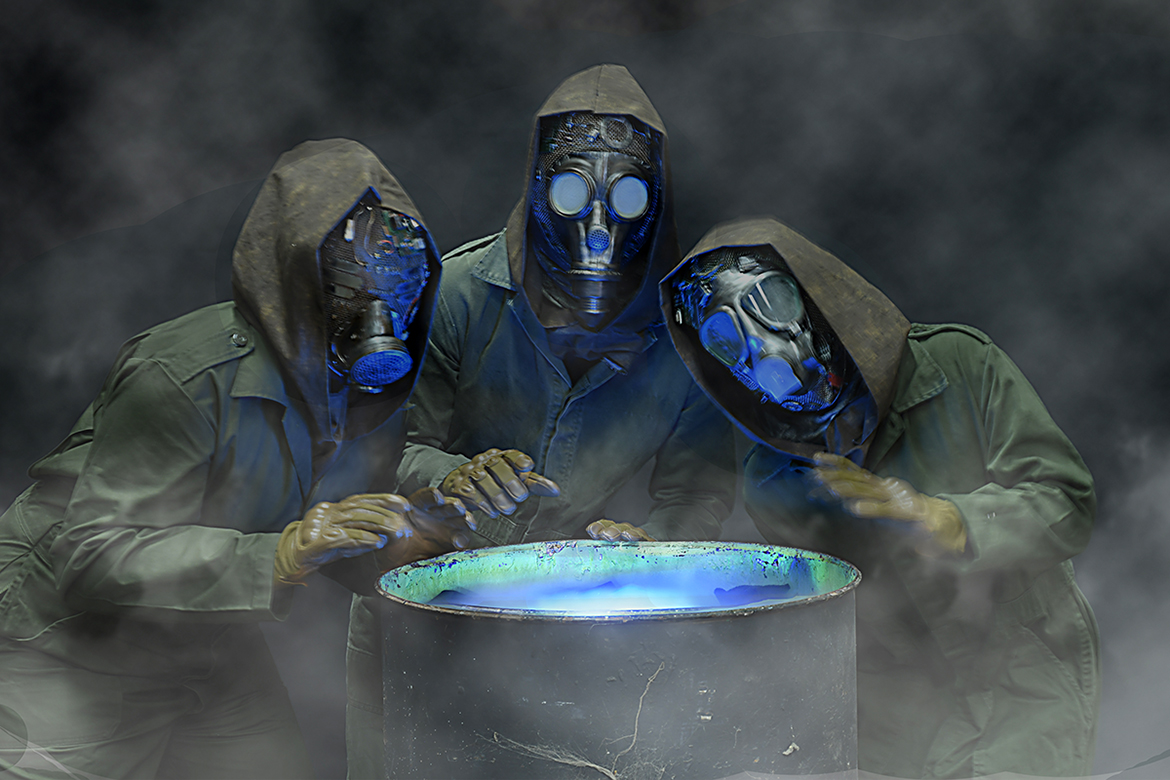 A trio of gas-mask-wearing witches, including MTSU theatre alumna Delaney Keith, right, brew up a fog most foul and filthy air in the Nashville Shakespeare Festival’s new production of “Macbeth.” MTSU will host the touring show inside Tucker Theatre Feb. 6-8; tickets are available at www.mtsuarts.com. (Photo courtesy of Rick Malkin and the Nashville Shakespeare Festival)