Hungry for horror? Films Committee has just the di...

Hungry for horror? Films Committee has just the dish 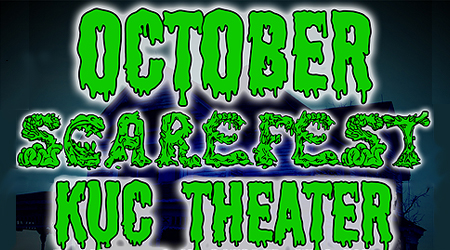 Horror film fans, rejoice! MTSU has a month of deliciously evil Saturday matinees ready to whet your appetite for that annual feast of shrieks and sweets known as Halloween.

And, thanks to the feeding frenzy it created last year, the classic “Rocky Horror Picture Show” is returning for two special late-night screenings in the KUC Theater: Friday and Saturday, Oct. 21 and 22, at 11 p.m.

Like the 2010 sold-out “Rocky Horror,” each screening has a $5-per-person admission charge. This year’s screenings also will feature a live shadowcast by Little Morals, a Nashville-based group of RHPS performers.

“This is a great piece of cinematic subculture that everyone should experience at some point in their life, and what better time than to do that in college?” Films Committee Chair Leslie Martin said of the classic RHPS.

“Tickets sold out last year and we had to turn people away.  We extended the event to two days so that everyone has ample opportunity to see at least one show, because it’s never the same show twice.”

Fans also can sharpen their fangs on this free horror fare every Saturday at 2 p.m. during “October ScareFest”:

“Rocky Horror,” first released in 1975, is the longest-running release in film history and has been playing in some theaters’ midnight showings for decades. The science-fiction/B-movie musical parody is renowned for its audience participation, which often includes dressing like the film’s characters and acting out scenes.

The Films Committee will not allow squirt guns or candles in the theater during the RHPS screenings for safety reasons. The film is rated R, and IDs will be checked for admission into the show. Non-MTSU students 17 and younger must have a parent or guardian accompanying them. MTSU students with a current ID and a paid ticket will be admitted regardless of age.

The KUC Theater is located on the second floor of the University Center. For more information on this special film ScareFest, call 615-898-2551,visit www.mtsu.edu/events or www.facebook.com/mtsustudentprogramming, or follow @MTSUStudProg on Twitter.