As you approach the intersection of Broadway and Rep. John Lewis Way in downtown Nashville, you will see a place that has been under development for years. No, it is not the Apple Store or the newest location for Hattie B’s Hot Chicken. It is the National Museum of African American Music (NMAAM)—an educational institution dedicated tounifying us as “one nation under a groove.”

The immersive journey begins in the Roots Theater with a film that provides context about west and central African cultures, the institution of slavery, and how distinctly African American musical traditions were created and continue to flourish.

Just as the grooves on a record are a single spiral, the main galleries showcase the connections and lasting legacy of African American religious music, the blues, jazz, R&B, hip-hop, and rap, which are among the more than 50 genres and styles finding their roots in African American music.

NMAAM is on par with any Smithsonian museum in Washington, D.C., because it answers the questions of how the music fits in our national story and because it has been created through the work of numerous talented historians. Two of those museum professionals who worked so hard to bring NMAAM to life are proud alumni of MTSU’s Public History graduate program, Marquita Reed-Wright (Ph.D., 2018) and Brandon Reid (M.A., 2022).

Reed-Wright, who now works as a project manager at 1220 Exhibits, spent over five years of her career at NMAAM. Reed-Wright used her experience at MTSU exploring different areas of public history, museum work, and cultural history in her role at the museum. She credits her studies at MTSU and her work with Carroll Van West, Tennessee state historian and director of CLA’s Center for Historic Preservation (CHP), for the ability to apply her skills and expertise to her current career trajectory.

Working with the CHP . . . I got to explore different ways to use material culture to teach and to help the public understand history, but also understand that it is their history,” Reed-Wright said. “. . . It’s not me telling them what they need to know, but them telling me what is important to them.

Almost two decades in the making, the NMAAM’s initial moniker was the “Nashville Museum of African-American Music, Art, and Culture.” The current iteration of the museum opened in 2021 and has expanded its reach to a national scale. This one-of-a-kind, 56,000-square-foot museum preserves and celebrates Black music, with an eye toward innovation and accessibility. And it does so at the corner of the busiest pedestrian intersection in our state’s capital by being a beacon of knowledge for locals and tourists alike.

When visitors enter the museum, they are greeted by a friendly staff to guide their way and artifacts that invite them into this musical wonderland. The museum also embraces technology to create an interactive experience throughout.

After viewing the introductory film, they enter the Rivers of Rhythm corridor that connects the permanent exhibits and features an animated timeline to guide visitors along the historical development of Black music. As visitors move through the exhibit and pass through Rivers of Rhythm, they become joyful participants in some of music’s most powerful moments, with full light and video shows featuring icons like Prince and James Brown.

Music in the museum is a constant presence, engulfing visitors in sound and amplifying the genres’ inter-connectedness. Reed-Wright had an internship at NMAAM during her studies at MTSU and made such an outstanding contribution that she was hired as collections manager. An integral part of her work there was to create similar opportunities for others. She appreciates the access that her chosen education path has provided and is eager to share that access with others. 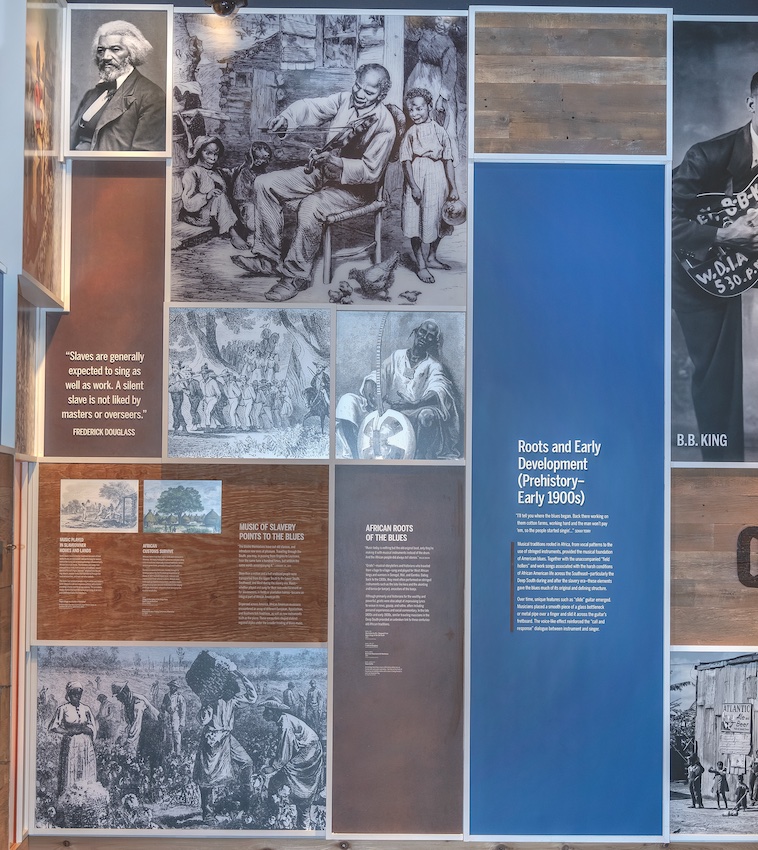 “Even if I am not the most famous historian or anything, I want to be a person who says ‘yes.’ We talk a lot, in my field, [about] how it is hard to find internships,” Reed-Wright said. She emphasizes the importance of creating “access and spaces for other people.”

One way she accomplishes this goal is by being an avid proponent of paid internships. She was able to put this ideology into practice by mentoring Reid during his paid internship at NMAAM while he was pursuing his master’s degree at MTSU.

Reed-Wright exemplifies what MTSU’s College of Liberal Arts desires for students: someone who understands the value of what they have been given and wants to provide those same opportunities for others. Yet she acknowledges the need to provide support for the interns she seeks. 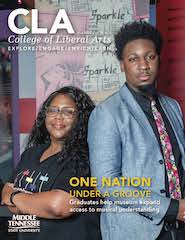 She emphasizes the importance of access in different modes to accomplish the stated goal of gathering more stories. Whether in the office or in the field, giving access to interns to learn and hone their craft is key.

There is a constant recognition of the need to represent history as a discipline that allows equal access to participation for everyone. Reed-Wright embraces this philosophy.

“One access point that I want to create is one of community stories, not just the Nashville story, but the communities of musicians, those who work behind the scenes,” she said. NMAAM wants “to tell all of those stories. It’s local, it’s national, and it’s global.”

Reed-Wright points to the common ground that emerges from diverse stories. Each distinct story is like the groove in a record; together, the grooves compose a beautiful record of the history that unites us all.

“MTSU allowed me to see my love for education. When I reflect on my time at MT, the first thing that comes to mind is theory meets practice,” he said.

He emphasizes the importance of applied theory in bringing history to life. Reid sees NMAAM as “creating a space where history becomes Our Story.” His goal is for people to “see themselves and celebrate themselves within history.”

Music is an integral part of Reid’s life, and it is clear how much his career at NMAAM is the perfect combination of his talents, passions, and academic interests. Prior to pursing his master’s degree at MTSU, Reid earned a B.A. in History in 2017 from Tennessee State University, where he was a member of the Aristocrat of Bands and served as drum major.

Reid has worked his way up at NMAAM, rising from a part-time administrative analyst to a full-time manager in the museum’s education department. He has adopted the same mindset as his mentor, Reed-Wright, in developing his understanding that he does his best work when he can help others do theirs, through mentorship.

“Having a mentor, you have investors,” he noted.

This desire to help others is not limited in scope, and it translates into all his work at NMAAM.

Representation is a big thing for us,” Reid said. “NMAAM goes out into the community, being representation for the students—so they know they can do it as well.

NMAAM is dedicated to offering professional development to educators, scholars, and graduate students through programming like its annual Rivers of Rhythm Institute for Social Education. Events like this provide resources for curriculum development and promote the free exchange of ideas through a symposium.

While NMAAM is a fun, vibrant, interactive space, it is so much more. NMAAM states that it seeks to provide “a way to celebrate and preserve African Americans’ influence on music and provide residents and visitors with diverse cultural offerings.” Creating access where it once was absent is a hallmark of NMAAM that resonates with CLA’s mission statement to instill in students a strong sense of responsibility and belonging to their local and global communities. Achieving this goal means providing a safe space for students to encounter difference and to expand their worldviews. 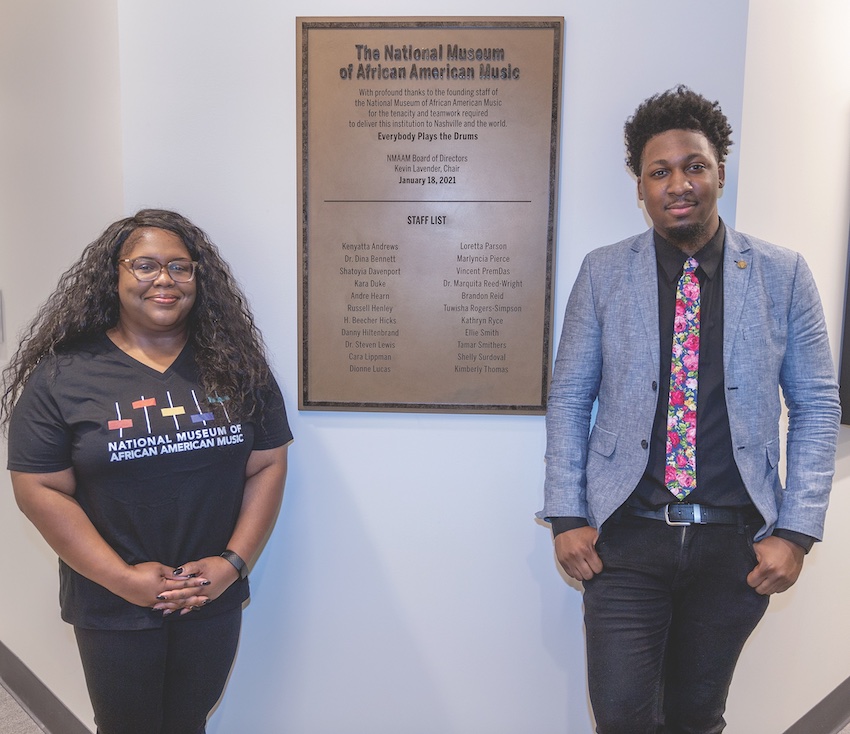 CLA wants to broaden students’ horizons and open their eyes to the richness of the world around them. What students learn and experience can contribute to the formation of their core identity as members of society. Through the college’s academic disciplines, CLA teaches myriad perspectives on issues and provides multiple frameworks for assessing situations and problems. This approach gives students access to various tools they can use to build their lives. The college does not narrowly focus on one point of view or one methodology, so students can find themselves and see their experiences within the disciplines we teach.

Similarly, NMAAM, with its focus on the contribution of African Americans to American music, moves beyond any one genre, any single location, or any specific era. It guides visitors to a place of inclusivity that allows all Americans to see themselves in the stories represented, the American story, the story of African American music. It provides insight into the formation of our national identity, “one nation under a groove.”