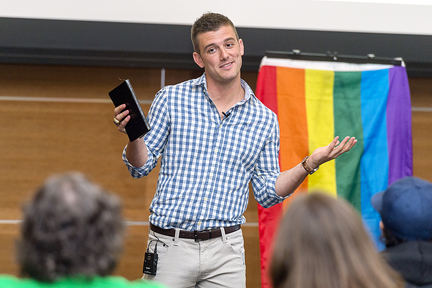 Choking is something an athlete doesn’t want to do, but Alan Gendreau’s voice was unashamedly choked with emotion when he returned to his alma mater.

The former Blue Raider placekicker was the first major speaker at MTSU’s inaugural LGBT+ College Conference in the Student Union ballroom April 10. You can watch a video excerpt of his talk below.

The conference is hosted by the MT Lambda student organization and the College of Behavioral and Health Sciences with support from Deloitte Services LLC, Nissan North America, the June Anderson Center for Women and Nontraditional Students, the MTSU National Women’s History Month Committee and the Tennessee Equality Project.

With the theme of “The Advocate in You!,” student organizations from more than 30 colleges and universities along with corporate and community leaders are slated to be in attendance through Saturday, April 12.

Gendreau revealed himself as gay to his parents when he was in high school and to MTSU head football coach Rick Stockstill when he was a freshman in college.

Stockstill, who introduced Gendreau, called the young man “one of my all-time favorite players. I’m proud of him for what he is as a man and how he represents his university, our football program and his family.”

Gendreau said he first began to notice certain feelings when he was 13 years old, but he repressed them for years because he didn’t know what else to do.

An Orlando, Fla., native who grew up playing soccer with his three brothers, Gendreau switched to football in high school and ultimately received a full athletic scholarship to MTSU.

He also exercised his passion for music, majoring in recording industry and singing in the Schola Cantorum Honors Choir. Today, Gendreau is a regular performer for Hardrive Productions musical events in Orlando, Fla.

By the end of his collegiate career, however, he had become the all-time leading scorer in Sun Belt Conference history and in MTSU football history as well.

Gendreau said he found a “comfort zone” in his freshman year in speaking freely about being gay with members of MTSU’s women’s volleyball team. This was especially important to him, he said, because it was the year his parents divorced and he “felt helpless.”

After his football teammates learned of his sexual orientation, Gendreau said it was not an issue with them. He referred to his teammates as his “brothers.”

“Coach Stockstill was like my second dad,” said Gendreau. “I could talk to him and he was always there for me.”

In answering questions from the audience, Gendreau said he didn’t encounter much trash talk from opposing players, but he would hear homophobic remarks from fans occasionally.

“The reason I told my story originally was because I wanted to help kids who were struggling,” said Gendreau, referring to the high rate of suicide among youngsters who self-identify as lesbian, gay, bisexual or transgender.

“It’s not even about being gay,” Gendreau said. “It’s about surrounding yourselves with family and unconditional love.”