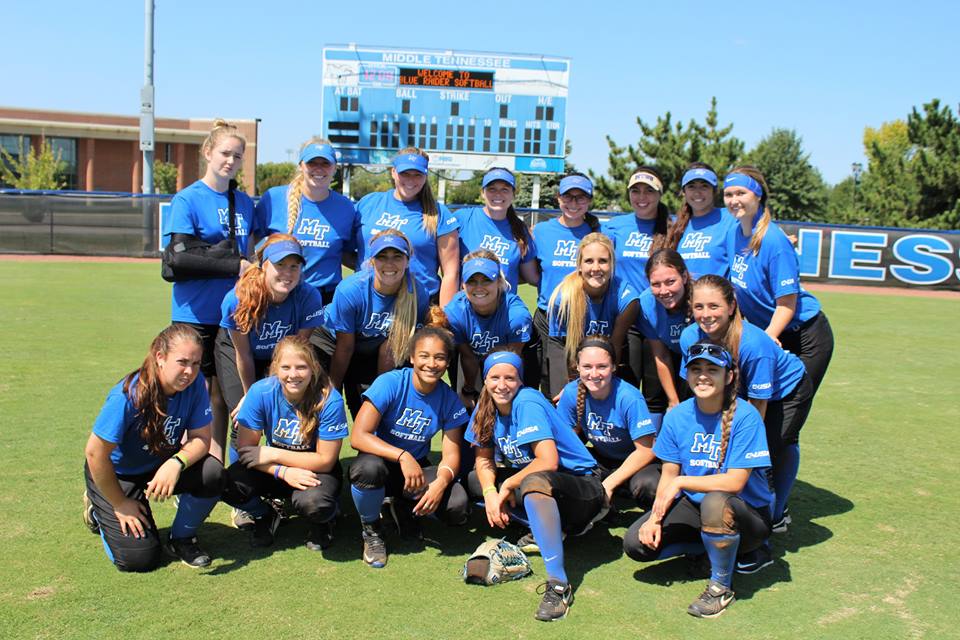 The MTSU Softball team was picked to finish 11th in a preseason poll back in February. The Raiders are now 6th in the CUSA tournament and they boast 6 All-Conference players on their squad. After finishing with a record of (34-21) overall and (11-11) in the conference, the Lady Raiders find themselves in the CUSA tournament for the first time, EVER. For three of these seniors (who are on that all-conference list) this week is a first for them, here is what this week means to them and their record-breaking team.

Morgan Harris is ready to run on the base paths. Photo by: Brent Beerends

To not only make it to the CUSA Conference Tournament for the first in my four years but in program history is an amazing experience. This has been the senior’s goal since we first stepped on campus and to finally achieve our goal as seniors are even more fulfilling. However, now that we are here we are going to approach it like any other game, one at a time.

I think we’re all just happy to be here. We’re excited to potentially do something that this program has never done and take the program to yet another high. Personally, I’m just taking every game like it’s my last and we’ll see where we end up at the end of the week!

Precious Birdsong checking her signs from her coach. Photo by: Brent Beerends.

This week means literally everything not only to myself but to Team 26. this is what we’ve worked for all season long. we knew from the jump if we could just get in the tournament, every team is beatable on any given day. and knowing how great Team 26 is, we know we can beat any team in this tournament. at this point, we are all committed to playing our roles bc we know that’s exactly what needs tobe done to lead to our success this week. one pitch, one inning, one game at a time mentality! we’re just going to keep getting better and better. I’m excited to see how far we go in this postseason!!!

The Lady Raiders take on North Texas on May 9th,2018, at 2:30 p.m. The conference tournament plays all the way until Saturday. To see what it would take for Team 26 to make the conference championship check out the Conference USA official bracket.