Professors are at the core of the college experience. Their expertise provides the framework for delivery of a sound education.

The best don’t just teach classes and write books; they inspire students and mentor protégés who graduate and make the world a better place.

MTSU’s College of Behavioral and Health Sciences possesses an abundance of riches when it comes to faculty. We couldn’t possibly profile all the wonderful professors housed in the college in these limited pages. Here, then, are just five selected from across the college who exemplify the quality of education available at MTSU. They are just some of the excellent educators your children and grandchildren can learn from if they choose to attend the university. 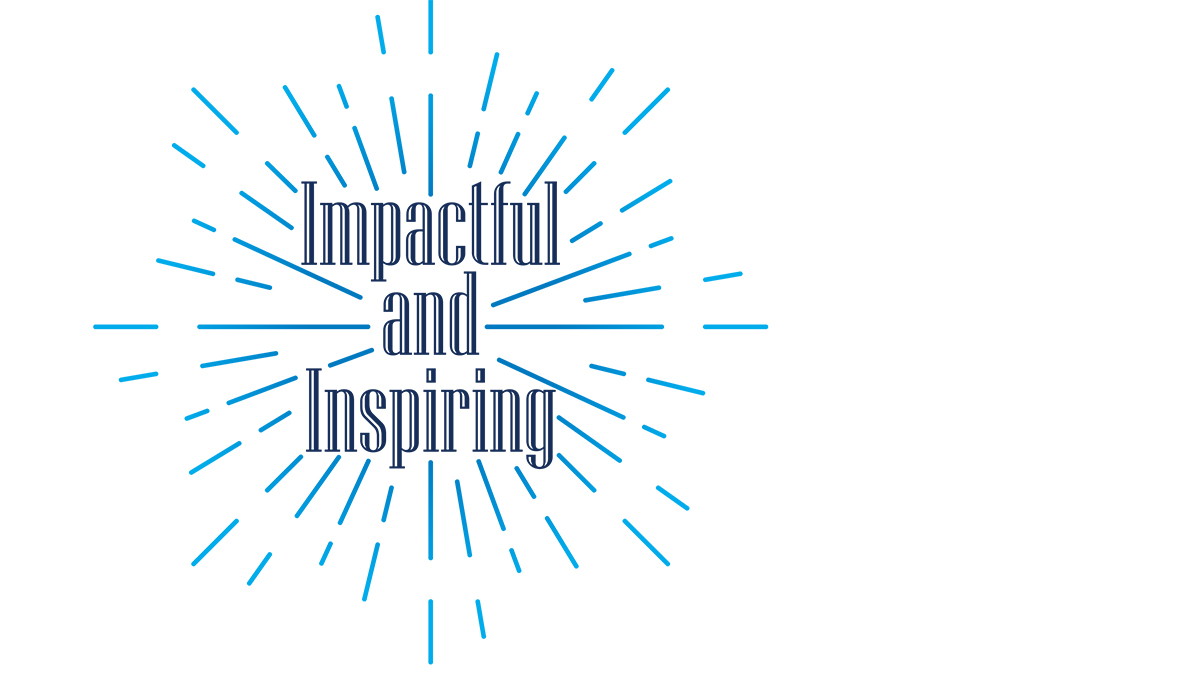 A national organization recently bestowed its highest award on Steven Estes, an MTSU professor in the Department of Health and Human Performance.

Estes received the President’s Award from the National Association for Kinesiology in Higher Education at the group’s annual convention in Savannah, Georgia.

Since its founding in 1897, the organization, known as NAKHE, has given its President’s Award to one of its own members only four times. The award recognizes an individual who has exhibited exceptional leadership in the profession and the organization.

Estes’ research interests include the relationship of mind and body in sport and physical activity, the philosophy of science in physical activity studies, postmodern sport, and the processes of leader development. In fact, he’s scheduled to serve as a professor in residence at West Point, teaching leadership classes at the U.S. Military Academy during the 2019–20 academic year. 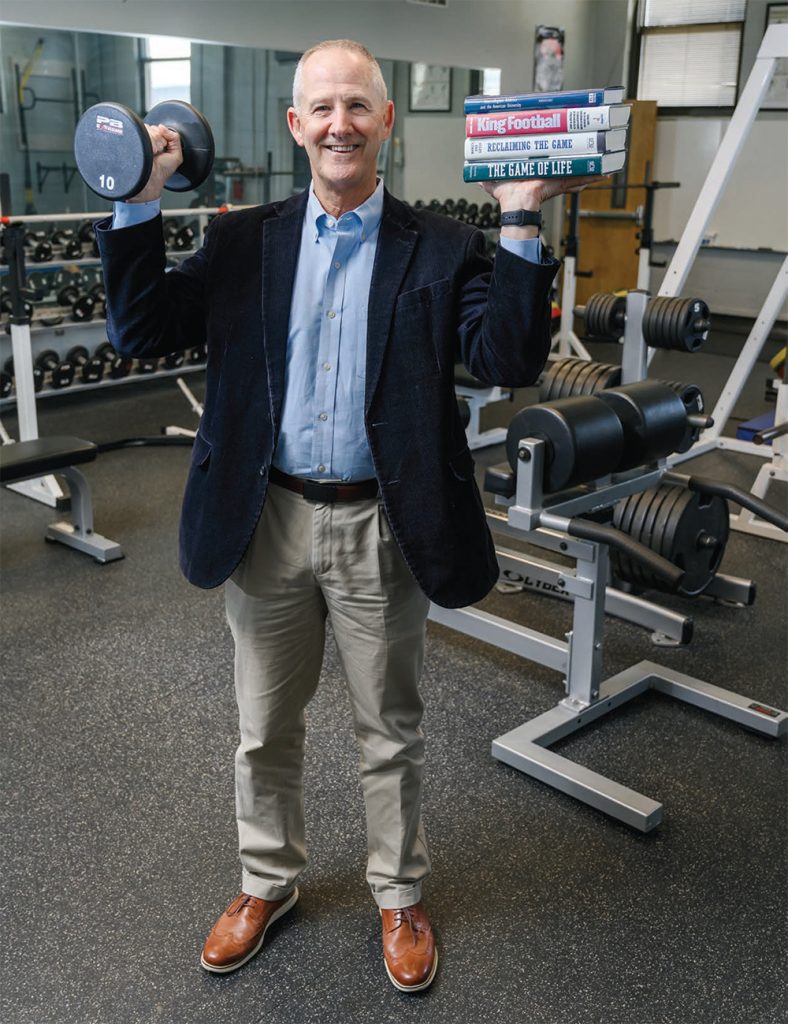 Estes’ interest in the field of kinesiology, which is the study of body mechanics, began when he was a college athlete. He trained and competed for U.S. National Rowing teams and for San Diego State University, where he earned his bachelor’s and master’s degrees in 1982 and 1985, respectively. He then received his doctorate from Ohio State University in 1990 with an emphasis in sport culture.

Estes, the author or co-author of four textbooks and numerous articles, has served two terms as president of NAKHE. Among his accomplishments are participation in the organization’s leadership institute, the NAHKE Fellows Program, the Engaged Scholar Program, the Department Head Certification Program and the Leadership Mentor Program.

His expertise in how the human body works also extends to his own activities. In the last few years, Estes has participated in a tandem jump with the U.S. Army’s Golden Knights parachute team at Fort Knox, Kentucky; completed a 26-mile march with Army ROTC personnel; and scored in the top range for his age group on the Army Physical Fitness Test.

You Talking to You?

If you talk to yourself, you’re not alone.

While that might sound like a classic aphorism from those insightful “philosophers” Yogi Berra and Casey Stengel, it’s actually a psychological reality. Talking to oneself is not unusual, and it’s not necessarily a sign of mental illness.

Professor Thomas Brinthaupt from MTSU’s Department of Psychology maintains that there are situations in which self-talk can be beneficial. These include attempting to remember something, trying to make a decision, expressing emotions, finding a solution to a problem, or facing a new challenge.

“There’s speech recognition and speech production functions in both of those. It’s very similar to normal conversation, but it’s internalized.” 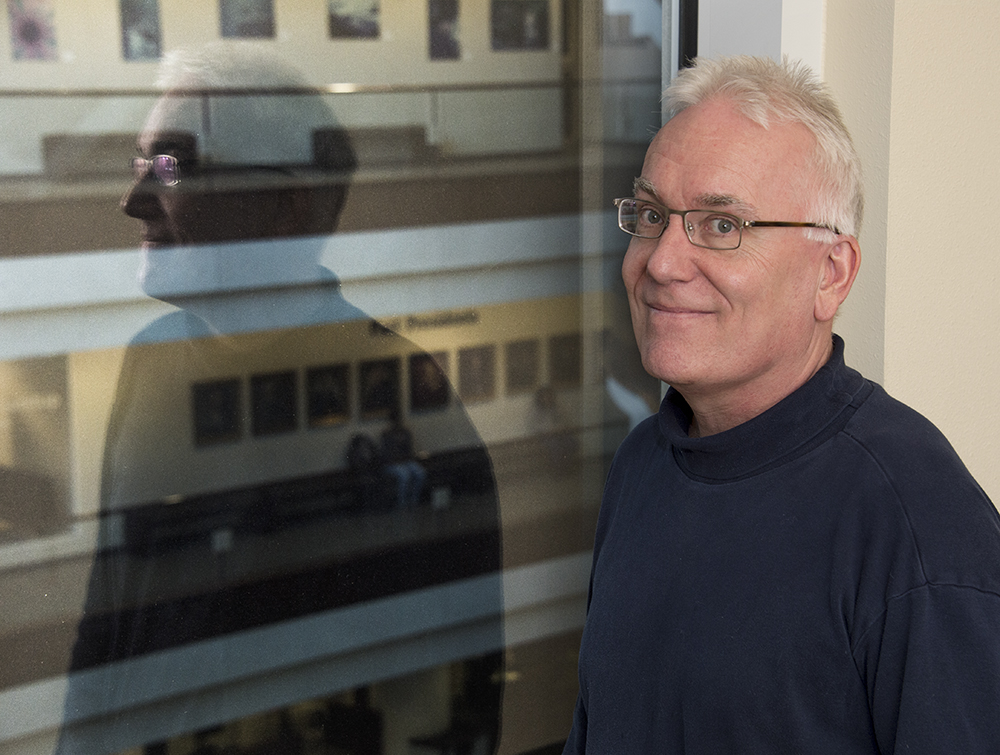 Brinthaupt says children around 2 or 3 years of age talk to themselves or to stuffed animals or other imaginary playmates as part of normal development.

The professor and his students conduct studies on dissociative experiences and self-talk. In psychology, dissociation is a condition that can range from merely ignoring one’s surroundings, as is the case with daydreaming, to dissociative identity disorder, formerly called multiple personality disorder, in more extreme cases.

Brinthaupt says two different hypotheses have emerged from the use of a standardized measure of how often individuals talk to themselves, called the Self-Talk Scale.

Brinthaupt delivered the keynote address on the subject of self-talk at the April 2018 meeting of the Middle Tennessee Psychological Association on the MTSU campus. In a unique act of audience participation, attendees had the opportunity to talk to themselves during the presentation.

The Worlds Where We Live

After rigorous study, the interior design associate professor now can lay claim to being a “WELL Accredited Professional.” The designation from the International WELL Building Institute, also known as WBI, means Brickey is now a certified expert in ensuring human health and wellness in manmade environments. 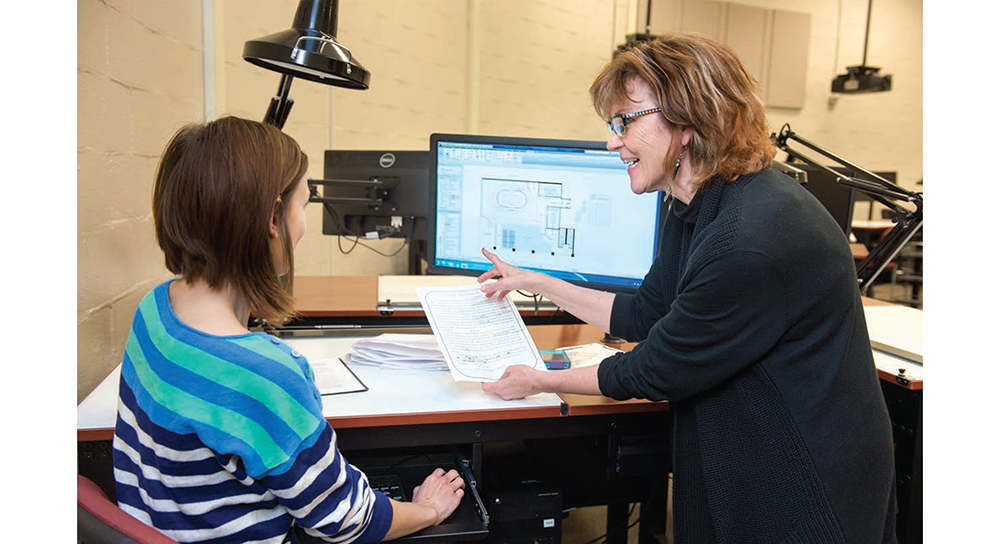 Brickey passed an examination that tested her knowledge of cross-disciplinary standards for air, water, nourishment, light, fitness, mind and comfort in offices and homes.

For example, both employers and homeowners can position stairways in certain areas to prompt people to walk more, thus helping to improve fitness.

Other ways people can change their living and working environments include creating spaces with more natural light or more open spaces that encourage people to get a breath of fresh air when they take breaks.

Brickey said she appreciates how the special training includes information from health, medical and scientific research.

“That kind of evidence-based design means that there’s a lot of different people at the table very early on,” she said.

The environmental movement’s impact on the need for clean air and water has led, in part, to a new enlightenment about internal climates that promote healthy lifestyles.

Brickey said there also are pragmatic, bottom-line reasons for businesses to invest in WELL building philosophies.

“You reduce turnover, you reduce health care costs, and you reduce the implications for mistakes in the workplace if you have environments that are well-designed,” Brickey said.

Two young women of color who dare to be different in the pages of a book are giving tweens inspiration to be themselves in the real-life face of peer pressure.

Nikki Jones, an assistant professor in the Department of Social Work, is the author of Lyric and Blake, a novel about two African-American junior high school females who defy gender norms by wearing boys’ clothes and dating girls. 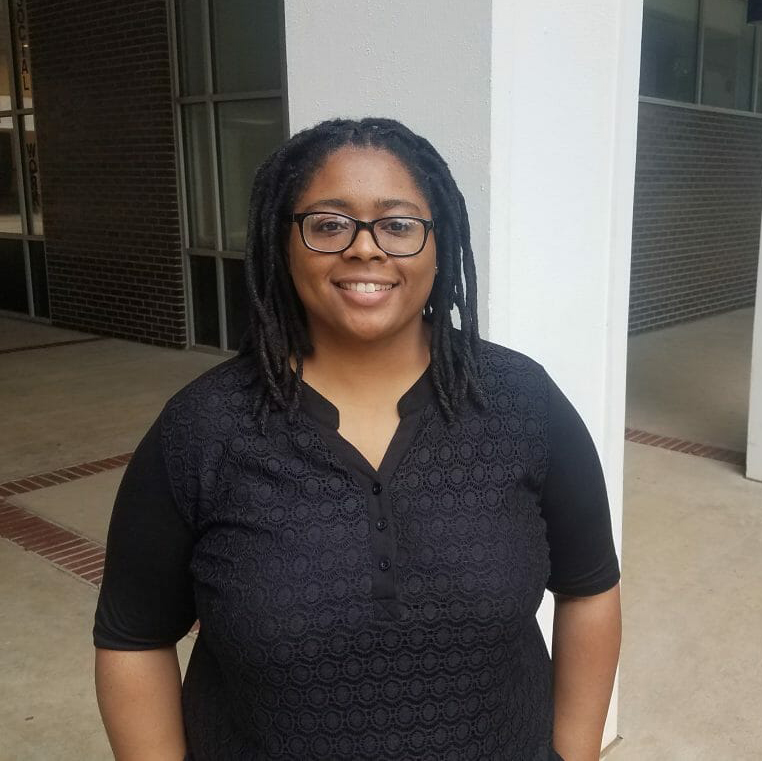 The book follows how they explore personal identity among the judgmental cliques in the student body.

One character, Astin Lyric Boyd, is a refugee from an elite prep academy. She enters seventh grade at Alcorn Junior High School only to encounter fashion wars and narrow-minded teachers. A girl who goes by her last name, Blake, befriends Lyric, and the two join forces to navigate their entry into adolescence in a hostile environment.

For Jones, the novel is intended to present characters with a strong sense of self who could be exemplars for young people who are grappling with sexual identity issues.

“It was very deliberate for me to make sure that I create characters who were self-assured . . . because they had a strong family network,” Jones said. “In so much of middle school fiction you see children with low self-esteem issues, children who are battling bullying, and things like that.”

In addition to LGBTQ issues, Jones is concerned with the impact of sleep deprivation on low-income children of color. The American Academy of Sleep Medicine maintains that African American youth have shorter sleep durations and more sleep fragmentation than other children. Researchers connect poor sleep patterns with aggressive behavior and lack of impulse control.

“Living in a hostile community where there may be a lot of crime, lights and sirens can contribute to sleep deprivation,” Jones said. “In addition to that, there are familial factors — a parent being out of the home and not being able to provide sleep routines, or living in a home where there’s a lot of noise.” 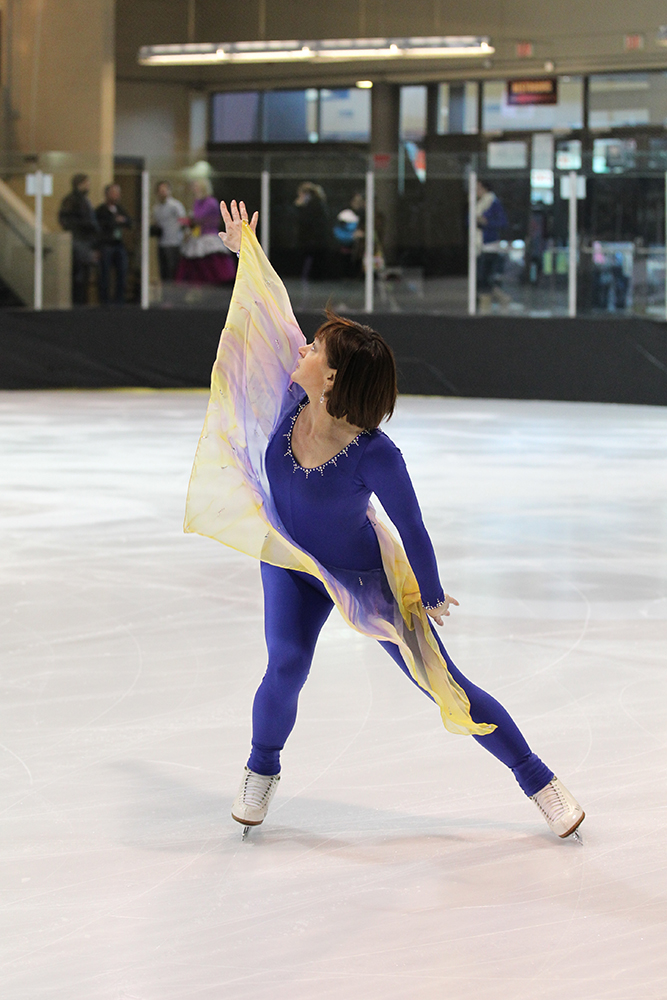 Practicing What She Preaches

When an ice skater moves to the South, she finds that more of her neighbors prefer ice in their tea than under their feet.

Registered dietitian Lisa Sheehan-Smith, a professor in MTSU’s Department of Human Sciences, didn’t let that stop her — even in the pre-Nashville Predators era.

A 2018 profile for espnW.com detailed how she took up her childhood avocation again at age 40 while working on her graduate degrees at Vanderbilt University.

Today, at age 59, Sheehan-Smith skates competitively, judges contests for a skating academy and serves on the board of the Nashville Figure Skating Club.

While skating her way to a more active lifestyle, Sheehan-Smith promotes fueling activity with healthy food.

In 2015, she secured a grant from the Produce for Better Health Foundation. In partnership with Kroger, MTSU’s Nutrition and Food Science Program students and alumni enlightened community members on how to shop wisely for groceries.

“People can eat nutritiously even when they’re really, really in a hurry,” Sheehan-Smith said. “We rely too much on a heavily fast-food, processed food diet.”

“We decided, looking at the underlying purpose of the national theme, that we would provide education on how to fuel bodies, promote getting more exercise into your daily life, and also teach the participants how to be more sustainable with their food consumption and purchasing,” Sheehan-Smith said.

One of her former students, MTSU alumna Monique Richard, was named one of “10 Dietitians Who Are Making a Difference” by Today’s Dietitian magazine in March 2018.

Far from resting on her academic and athletic laurels, Sheehan-Smith is taking up another competitive activity she thought she had left behind: baton-twirling.

To read this story and more: Outcomes Magazine Spring 2019