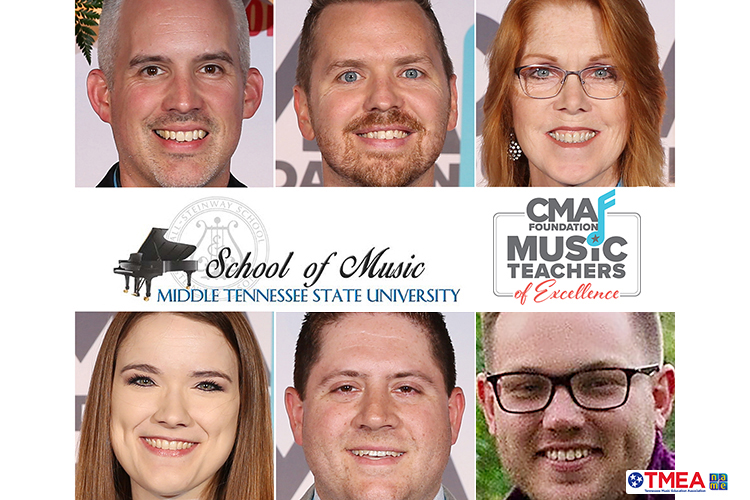 Six MTSU School of Music graduates who’ve made a career out of sharing the arts with youngsters across Tennessee have earned extra-special recognition from those who see the results of their efforts every day.

The CMA Foundation recently included five MTSU alumni in its annual Music Teachers of Excellence awards celebration, praising the quintet and 25 other educators from across the country who “go above and beyond their role and responsibilities in the classroom and are vital to their students and communities.”

And a 2015 music grad, who headed straight back into the classroom to teach what he’d learned at MTSU, is the state’s 2019 Outstanding Young Music Educator, thanks to the Tennessee Music Education Association.

The evening’s honorees, which comprised 10 music educators from Metro Nashville Public Schools, 10 from districts across the state of Tennessee and 10 from across the United States, also each received $2,500 for his or her school’s music program and $2,500 for personal use.

Hazlett, a Mt. Juliet, Tennessee resident, earned his Master of Arts in Instrumental Conducting from MTSU and has served McGavock students as director of bands since 2004. Holland, who lives in Smyrna, Tennessee, and is associate director of bands at Nolensville, earned a Bachelor of Music in Instrumental Music Education from MTSU and has worked with Williamson County Schools bands for nearly a decade.

Waters, a Nashville resident who earned her bachelor’s degree from MTSU and has directed middle and high school bands since the late 1980s, established Oliver Middle School’s band program in 2004. Williams, a Murfreesboro resident who also earned a Bachelor of Music in Instrumental Music Education from MTSU, joined Siegel as director of bands in 2017. Zolkower, a Nashvillian and another instrumental music education degree-holder from MTSU, has served as Hilllwood’s band director since 2014.

Hazlett and Zolkower also received this award from the CMA Foundation in 2016. This year marks Waters’ third as a CMA Foundation Music Teacher of Excellence.

The CMA Foundation, the philanthropic arm of the Country Music Association, launched Music Teachers of Excellence in 2016 to celebrate, honor, and invest in music education teachers who exemplify excellence. To date, the CMA Foundation has honored 145 music teachers and given more than $400,000 to support the recipients.

The state music teachers group recognized Noblin, a Mt. Juliet resident and 2015 MTSU School of Music alumnus with a degree in instrumental music education, for his work with the Lebanon-based band and the state organization. He currently serves as ninth-10th concert band chair for the association’s All-State Management Team.

For more information on MTSU’s School of Music, including its public performances and special events, visit www.mtsumusic.com.