In the News: The Progressive E..

“It has been an improbable journey.”

With those words and expressions of gratitude for a host of mentors, MTSU professor Andrew Owusu accepted the John Pleas Faculty Award and a big hug from his 7-year-old son, Kai, Feb. 23 in a ceremony in the James Union Building.

Owusu, graduate director for the public health unit within the Department of Health and Human Performance, became the 26th recipient of the honor.

MTSU presents the award annually during the university’s Black History Month observance to a tenured or tenure-track Black faculty member who has demonstrated excellence in teaching, research and service. 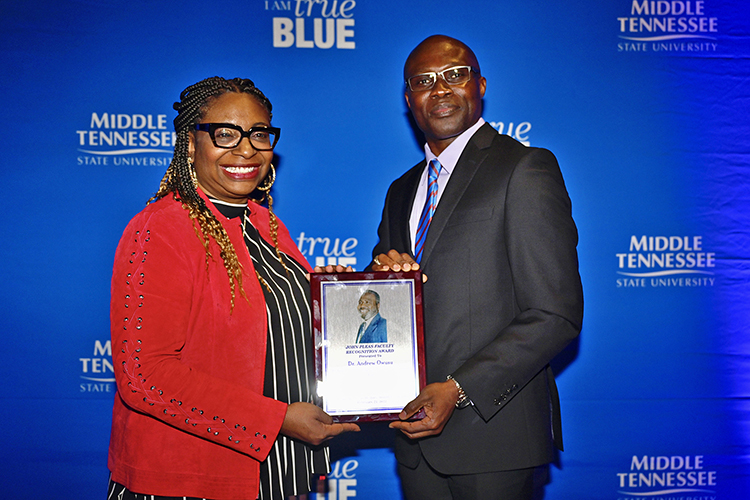 Dr. Andrew Owusu, right, professor of health and human performance at MTSU, receives the 2022 John Pleas Faculty Award from Dr. Jennifer Woodard, assistant dean of the College of Media and Entertainment and 2021 Pleas Award recipient, at a Feb. 23 ceremony in the James Union Building. (MTSU photo by Cat Curtis Murphy)

“I am most grateful for opportunities that have helped to make a difference in the lives of my students,” Owusu said. “And that begins with accepting the fact that our students and athletes don’t often come as neat little packages. They don’t nicely fit on that conveyor belt. No, my job is to meet them where they are and try to help them.”

A native of Ghana, Owusu referenced his humble origins in Africa as a young boy with asthma who found advancement through track and field. Owusu is an eight-time All-American and three-time Olympian. He assisted the late MTSU track coach Dean Hayes as a coach since 2004 and continues in that role today.

“I could never match Coach Andrew as a coach,” Bonner said. “He is the most technical coach that I’ve ever seen in my life.” 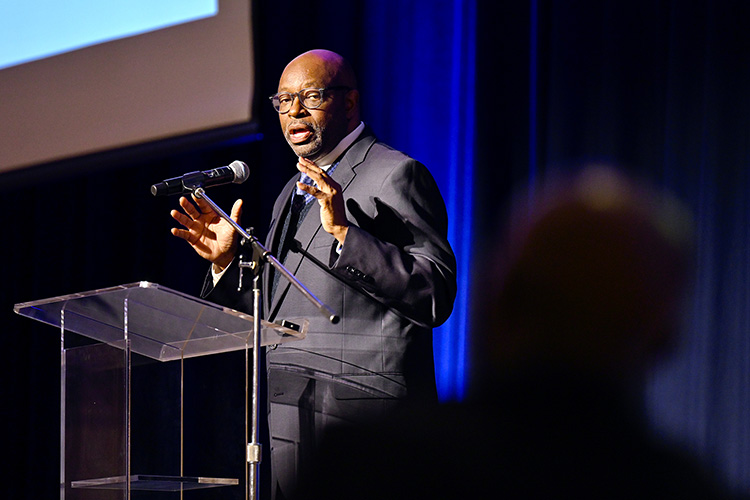 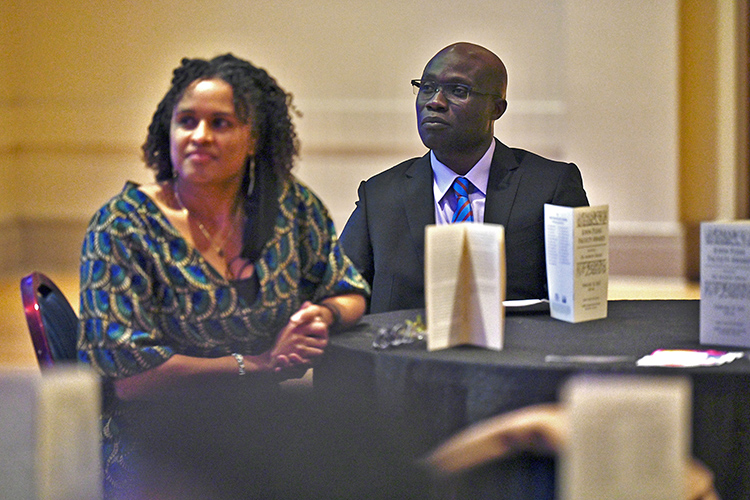 Dr. Andrew Owusu, right, a professor of health and human performance, listens to testimonials praising his record of teaching, service and research at the 2022 John Pleas Faculty Award ceremony Feb. 23 in the James Union Building at MTSU. At left is his wife, Dr. Danielle Brown, a lecturer in the Department of Biology. (MTSU photo by Cat Curtis Murphy)

As his wife, MTSU biology lecturer Danielle Brown, looked on from the audience, Owusu said the key to his personal growth has been the balance of academics and athletics, the combination of intellect and physicality that has defined his career.

“Somehow, my collegiate career set me on a path much different and more productive than the one I had envisioned for myself,” Owusu said.

Owusu’s research interests include adolescent health risk behaviors and protective factors, childhood lead poisoning, and school health policies and practices. He has secured more than $895,000 in external and internal grants in support of research and service over the past 15 years.

In celebrating Owusu’s success, Dr. Marquinta Harvey, an assistant professor of public health and assistant director of the Belmont Data Collaborative at Belmont University in Nashville, recalled his support while she was in the health and human performance doctoral program at MTSU.

“Sometimes, when we felt like we couldn’t make it, we could go to his office and talk to him about what we were facing, whether it was academic or another type of barrier,” Harvey said.

Dr. John Pleas, the professor emeritus of psychology who inspired the annual award, was unable to attend the ceremony. Master of ceremonies Jennifer Woodard, assistant dean of the College of Media and Entertainment and 2021 John Pleas Award recipient, read Pleas’ remarks.

“Your teaching, research and university and community service meet the standard for the award and sets the bar higher for future applicants,” Pleas wrote for Owusu.

University Provost Mark Byrnes applauded Owusu on receiving the faculty honor, noting that “nothing like this comes easy.”

The event was part of MTSU’s celebration of Black History Month, which features a theme this year of “Black Love: Health, Wellness, Relationships.” 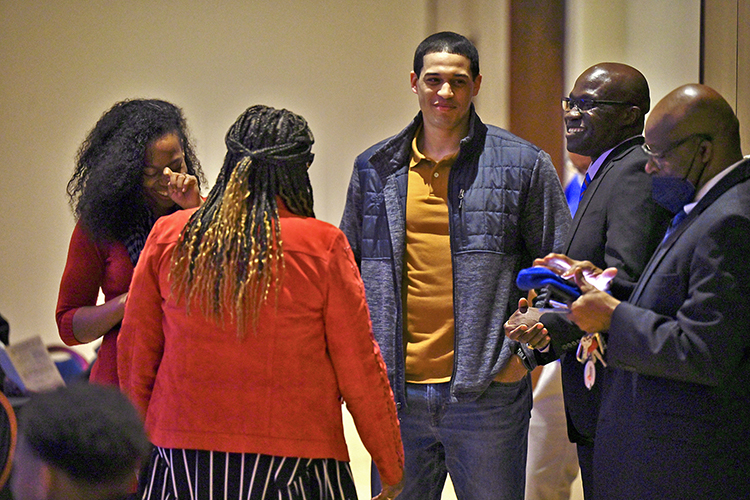 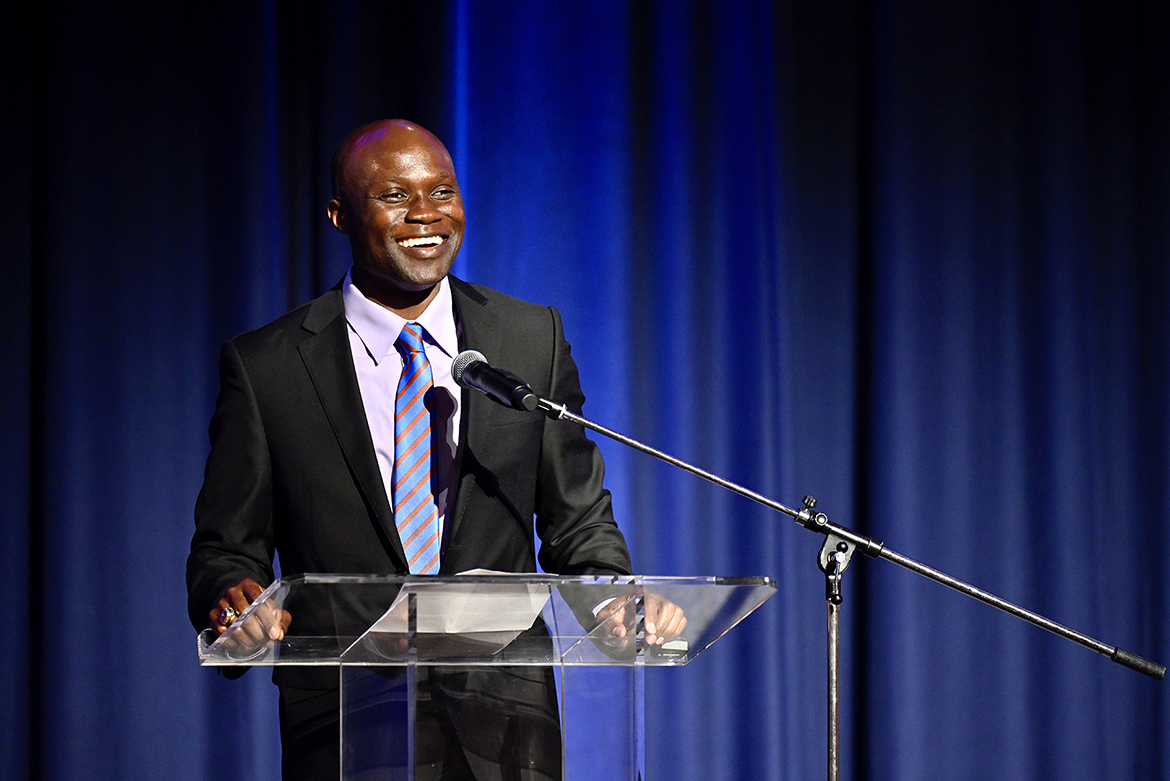 Dr. Andrew Owusu, a professor of health and human performance, addresses an audience after being formally announced as the 2022 recipient of the John Pleas Faculty Award in a Feb. 23 ceremony at the James Union Building at Middle Tennessee State University. (MTSU photo by Cat Curtis Murphy)