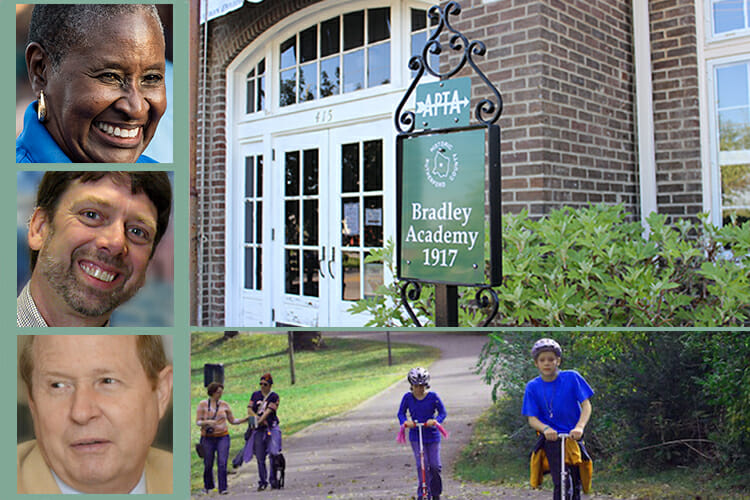 MTSU students and faculty are among more than two dozen people who have been recognized with statewide and regional honors for their volunteer work with the Murfreesboro Parks and Recreation Department.

Bradley Academy, Rutherford County’s first school, originally opened in 1809 and served white students until the 1850s. In 1854, it became the county’s first school for African-American students, serving in that capacity until 1955. Renovations and historic preservation began in 1990 on the current building, constructed in 1917-18, and the Bradley Academy Museum and Cultural Center opened in 2000.

This sign from the Association for the Preservation of Tennessee Antiquities denotes the historic significance of Bradley Academy, reopened in 1917-18 on its current site as Rutherford County’s first school for African-American students.

Bonner, a former dean of the College of Education and special assistant to the university president, was honored for her “loving spirit and respected leadership [that] has motivated our community in preserving and honoring our heritage.”

Martin, whose museum management courses have been revamping Bradley Academy’s exhibit area for more than a year, was recognized for that work, “where he fostered a student-centered project that brought a new exhibit that makes history shine.”

Syler’s award was prompted by his “role and years of service to the Greenway Special Projects Committee” for the Murfreesboro Greenway System.

The city said in a release that the Four Star Award “recognizes a person’s participation on a board, commission, committee or council that influences, benefits and strengthens recreation in the community.”

Grad student Fisher served as project director for the gallery redesign of the museum’s Bradley/Holloway Room. The interactive exhibit that it accommodated, which is currently on display, is titled “Education and Empowerment: African American Schools in Rutherford County” and features a pair of touch-screen monitors filled with images of Bradley’s history as well as that of Holloway High School.

You can learn more about Martin, Fisher and Schafer’s work on the Bradley Academy Museum here. More on Bradley Academy’s history and MTSU’s support for reviving the historic facility is available here.

The full press release from the city of Murfreesboro is available here.

This touch screen display at Bradley Academy Museum and Cultural Center is part of an interactive historic exhibit titled “Education and Empowerment: African American Education in Rutherford County” that was completed by MTSU graduate students in 2017. (File photo courtesy of Jim Davis/ Murfreesboro Parks and Recreation)

Visitors enjoy walking and riding along the Murfreesboro Greenway System in this file photo. (Photo courtesy of the city of Murfreesboro)