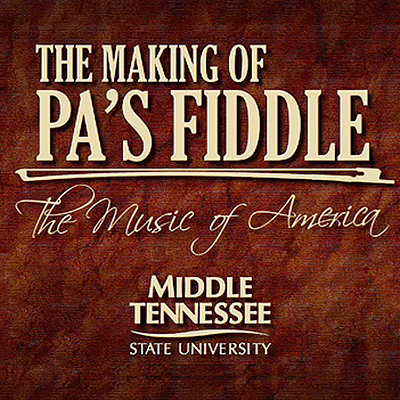 Still wishing you could go behind the scenes of that all-star PBS concert special “Pa’s Fiddle: The Music of America,” featuring tunes from the Laura Ingalls Wilder books?

Tennessee’s PBS stations are giving you a free all-access pass Saturday and Sunday, Dec. 7 and 8, to “The Making of Pa’s Fiddle,” a half-hour documentary on the 2012 event produced by MTSU Department of Electronic Media Communication students and EMC professor Tom Neff.

Thanks to The Tennessee Channel, a joint effort of Tennessee’s six PBS stations, “The Making of Pa’s Fiddle” will air statewide simultaneously Saturday night and Sunday on each station’s secondary digital channel.

“The Making of Pa’s Fiddle” will air Saturday, Dec. 7, on Nashville Public Television’s secondary digital channel, 8.2, beginning at 8 p.m. Central time. It will be rebroadcast on NPT2 at 9 a.m. and 4 p.m. Sunday, Dec. 8. (You can watch a two-minute promo of the documentary below.)

The PBS stations’ secondary digital channels are available via antenna on a digital television or an analog TV with a DTV converter box. Most also are available through local TV providers; NPT2 is available in the Nashville area on Comcast Channel 241 and Charter Cable channel 191.

“The production was a wonderful effort using every department within EMC, from production to editing to graphics to music to journalism,” said Neff. “The students did a superbly professional job, and their effort has been rewarded with this wonderful opportunity from our friends at NPT.”

“It was an unforgettable experience, and it turned out to be a really great film,” Willey said. “The film has a subject that’s perfect for Nashville. It not only covers the actual event but it shows the absolute importance music has in our lives, an importance that is often over looked and judged merely as entertainment.”

Willey added that he feels “very blessed to have been given the opportunity by Professor Neff to direct a project this big so early in my career. I suppose he had much more confidence in me than I did at the time!”

Dr. Dale Cockrell, director of MTSU’s Center for Popular Music and a scholar of the early American tunes immortalized in the “Little House on the Prairie” book series, teamed up with actor/producer Dean Butler to create “Pa’s Fiddle: The Music of America.”

The “Making of Pa’s Fiddle” documentary had been available only on DVD as part of a special PBS donors’ premium package when the concert aired nationwide in June 2012.

“There were several production companies involved in the effort of the ‘Pa’s Fiddle’ show itself, and all of them were surprised when they discovered the documentary group consisted solely of students,” Neff said. “They had assumed they were professional from their skills and behavior. I thought that was a great compliment to the students.

“This is the type of production partnership we like to do at MTSU: student production crews working on real projects that can be enjoyed by the general public on a professionally distributed basis.”

WCTE-TV in Cookeville, Knoxville-based WETP, WTCI-TV in Chattanooga, WLJT-TV in Martin and WKNO-TV in Memphis also will air the MTSU-produced documentary this weekend. You can visit The Tennessee Channel’s website for station details.

PBS editor Bill Morris gives final instructions to MTSU students before the filming of “Pa’s Fiddle: The Music of America” at the Loveless Barn in Nashville Jan. 6, 2012. (MTSU file photo by Andy Heidt)