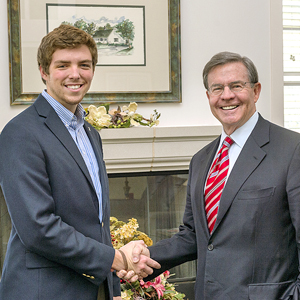 For MTSU senior Jared Adams of Smithville, Tenn., the James C. Free Endowed Scholarship he received for the fall semester helped greatly in his pursuit of a college degree.

“Any kind of scholarship like this is very much appreciated, and honestly, if it wasn’t for that (financial assistance), I’m not sure that I would have been able to get a degree,” he said.

The political science major, who is scheduled to graduate in December, has worked part-time jobs since he was a teenager to help contribute to his family’s finances and help pay his way through school.

Adams, 22, said he was able to have lunch with MTSU alumnus and Columbia, Tenn.-native Jim Free this semester and hear his perspectives about a life and very successful career in political circles that led him to establish the $1,500 academic scholarship for political science majors.

Free, who earned his bachelor’s and master’s degrees at MTSU, went on to work as chief clerk in the Tennessee House of Representatives for then Speaker Ned Ray McWherter and as a congressional liaison for President Jimmy Carter’s administration. He also worked on the presidential campaigns of Carter, Walter Mondale and Al Gore. He is currently president and CEO of The Smith-Free Group, a Washington, D.C.-based lobbying firm.

“It was inspiring to hear his story,” Adams said. “He comes from a small Tennessee town and he worked his way up until where he is today. It was encouraging to say the least.”

Adams plans to work at the General Assembly in Nashville during the spring, then moving on to work for a political campaign through August before attending law school in the fall.