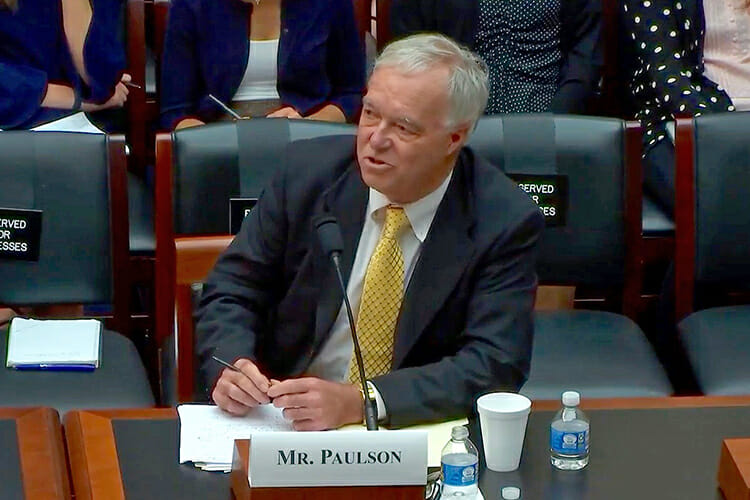 The Committee on Education and the Workforce asked Paulson, who also serves as president of the Newseum Institute’s First Amendment Center, and others to share thoughts on the role of college campuses as places where ideas from all quarters can be shared and debated, even if those ideas could be considered offensive or disturbing.

In this video screen capture, Dean Ken Paulson of MTSU’s College of Media and Entertainment testifies Wednesday, Sept. 26, before the Committee on Education and the Workforce of the U.S. House of Representatives in Washington, D.C.

Paulson told the committee he draws his insights from his five years as a dean at MTSU, as well as years of visiting college campuses across the nation as a speaker on First Amendment topics.

Paulson said while he has seen “widely distributed news stories about students shouting down speakers, or college administrators engaging in heavy handed tactics,” he doesn’t feel such tactics are prevalent at most campuses.

“I honestly don’t believe there’s an epidemic of suppression or intolerance in the nation’s universities,” he said.

Rather, Paulson said, most students are concerned about “paying for school, staying in school and making good enough grades to get a job when they leave.” He added, “That’s a dynamic you’ll find at universities all over America.”

However, Paulson said there are indisputably “some high-profile instances where college administrators and students are willing to bend free speech principles to prevent hurt feelings or ideological conflict.”

“Somewhere, over the past two decades, the land of the free has become the home of the easily offended,” Paulson said. “There are some who see free speech infractions and ask for Congress to do something. But with all due respect, this is not about legislation. It’s about education.

“You can’t shout down a speaker if you truly understand how diversity of opinions have bolstered our democracy. You can’t censor students or their media if you understand what Thomas Jefferson, James Madison and the first generation of Americans meant by freedom of the press.

“You can’t try to zone protests off your campus if you appreciate the value of petition and assembly.”

But, Paulson said, too many students do not truly understand those principles. He cited First Amendment Center surveys that showed a third of Americans cannot name a single freedom contained in the First Amendment and only about 2 percent can name all five freedoms — speech, religion, assembly, petition and press.

“A shared commitment to freedom of press, faith and speech should actually unify this nation,” he said.

Below is video of the two-hour plus hearing, with Paulson’s opening remarks beginning around the 48:37 mark:

U.S. Rep. Virginia Foxx, R-North Carolina, who chaired the committee, thanked Paulson for his “1 For All” public outreach campaign, which he founded as editor-in-chief of USA Today in 2007 and has since moved to MTSU. “Thank you for the work you are doing to help Americans understand the core principles that make our country so unique,” she said.

She asked, however, if such outreach efforts have “changed or evolved” with the proliferation of social media.

Paulson said he has noted some students are hesitant to engage on issues on social media for fear of being “slammed,” but a survey conducted by the Knight Foundation in partnership with the Newseum Institute’s First Amendment Center found that students who engage with the news on social media have a deeper respect and understanding of free speech rights.

“As chaotic as social media can be, we believe there’s a silver lining for free speech,” he said.

Paulson was joined before the panel by journalist and author Zachary Wood, who has written on the importance of engaging with others who hold opposing viewpoints; Joseph Cohn, legislative and policy director for the Foundation of Individual Rights in Education (FIRE), a non-profit nonprofit group that focuses on civil liberties on college campuses; and Suzanne Nossel, CEO of PEN America, which works to advance literature and defend free expression.