‘MTSU On the Record’ reveals p.. 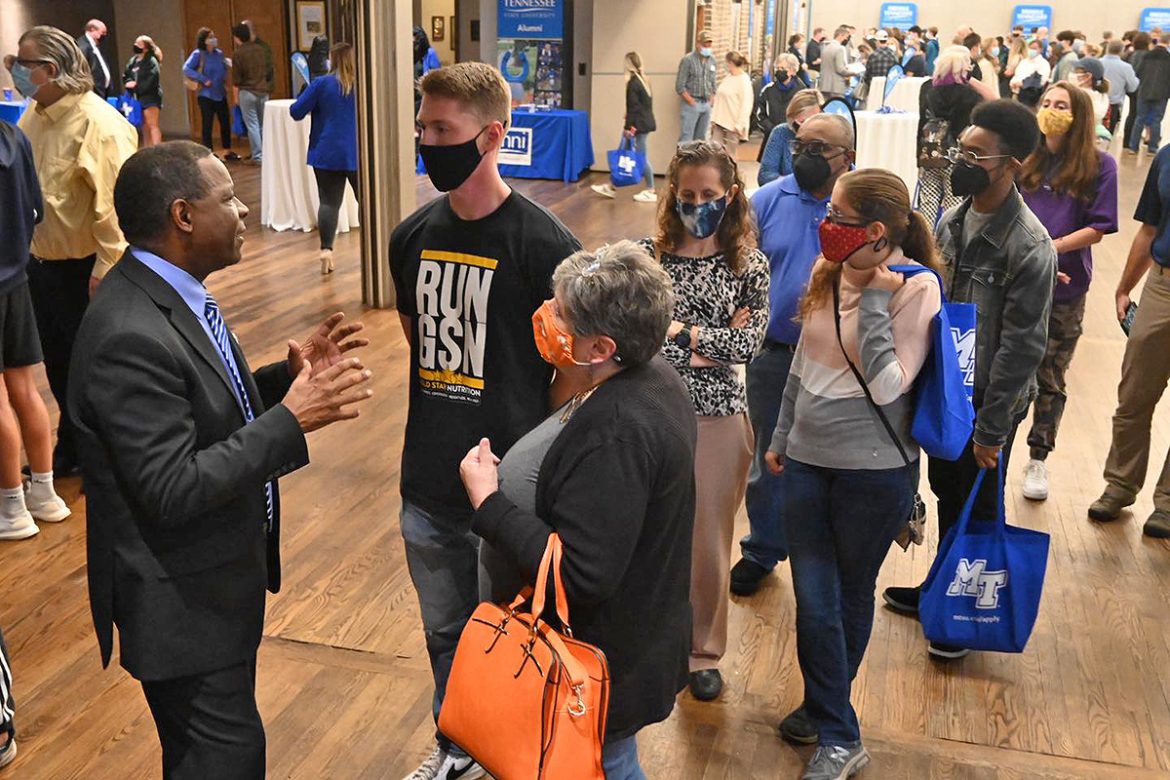 Hart, 17,who is from Morristown, Tennessee, and a Morristown West High School senior, and his father, Duane, attended the MTSU True Blue Tour event in Johnson City — 65 miles from home. One night later, Matthew Hart and his mother, Lori, made the 50-mile trip to Knoxville for her to learn about the mechatronics engineering program he wants to study — and he was extremely excited. 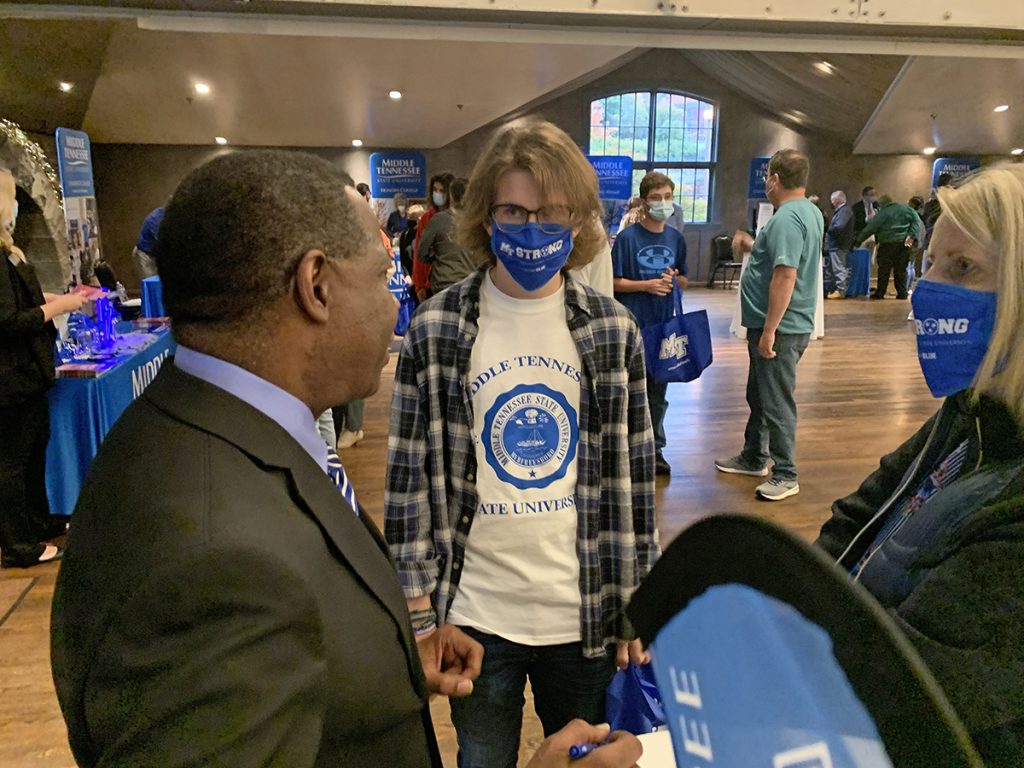 MTSU President Sidney A. McPhee, left, learns how interested Matthew Hart of Morristown, Tenn., is in the university and its mechatronics engineering program. Hart and his mother, Lori, visited the MTSU True Blue Tour event recently in Knoxville, Tenn. On Oct. 27, the Morristown West senior and his father, Duane, attended the tour event in Johnson City, Tenn. (MTSU photo by Randy Weiler)

Matthew Hart, wearing MTSU apparel as were many students, was among dozens of students attending the events in Johnson City and Knoxville.

In the midst of recruiting new and transfer students for 2022 and beyond, MTSU travels across Tennessee and to five major cities out of state to share what MTSU offers in terms of academic programs, financial aid, guaranteed scholarships, housing and much more.

In Knoxville, Hart and his mother personally talked to MTSU President Sidney A. McPhee, sharing his enthusiasm for wanting to attend and study mechatronics, which has 315 students now and more than 260 graduates since 2013.

“I wanted to show my mom how much I like the school,” he said. Added Lori Hart: “He confirmed that’s where he wants to go.” The president gave him a $1,000 scholarship for attending back-to-back nights.

In Johnson City, Eliza Sanders, 18, of Kingsport, Tennessee, a Northeast State freshman and $5,000 scholarship recipient, attended the Tennessee Governor’s School for the Arts at MTSU in 2019 and “really enjoyed the (MTSU) dance program and fell in love with the studio.” 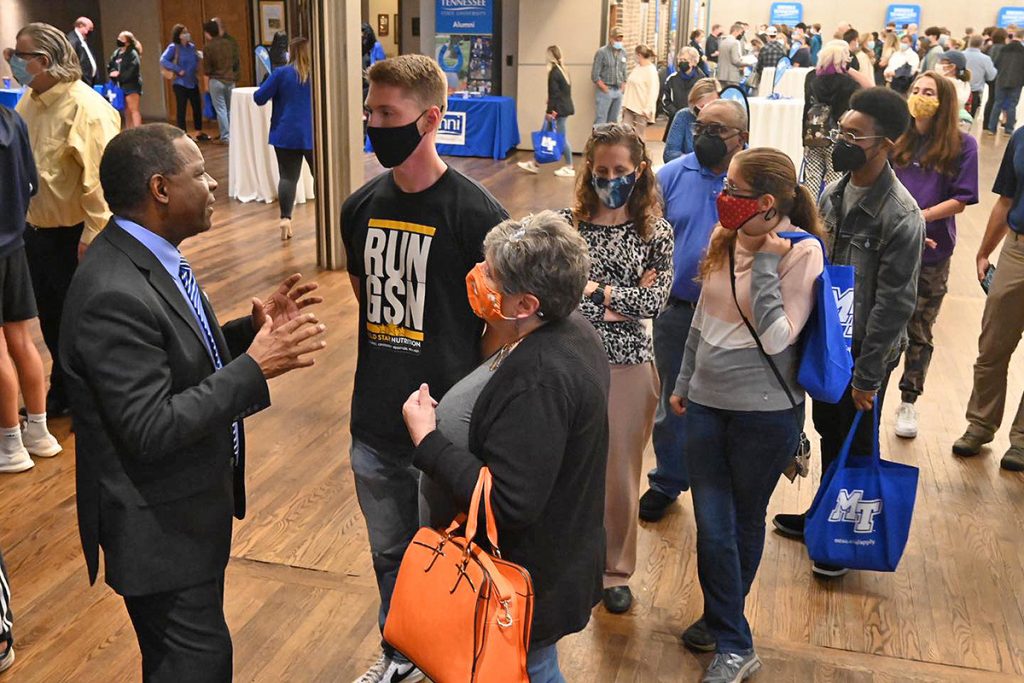 MTSU President Sidney A. McPhee, left, visits with prospective students and their parents in Knoxville, Tenn., answering their questions and selling them on the university’s academic programs and affordability. MTSU recently visited Knoxville, recruiting students for 2022 and beyond as part of the True Blue Tour. (MTSU photo by Andrew Oppmann)

As McPhee kept drawing names of winners of scholarships in Knoxville, there emerged a common theme: Many prospective students want to be professional pilot majors in aerospace — one of the nation’s leading flight school programs.

“She likes to work with her hands,” her father, Trent Futrell, said. “We were blown away by the scholarship (McPhee added $1,000 when he learned of the MTSU connections). This is really cool.” 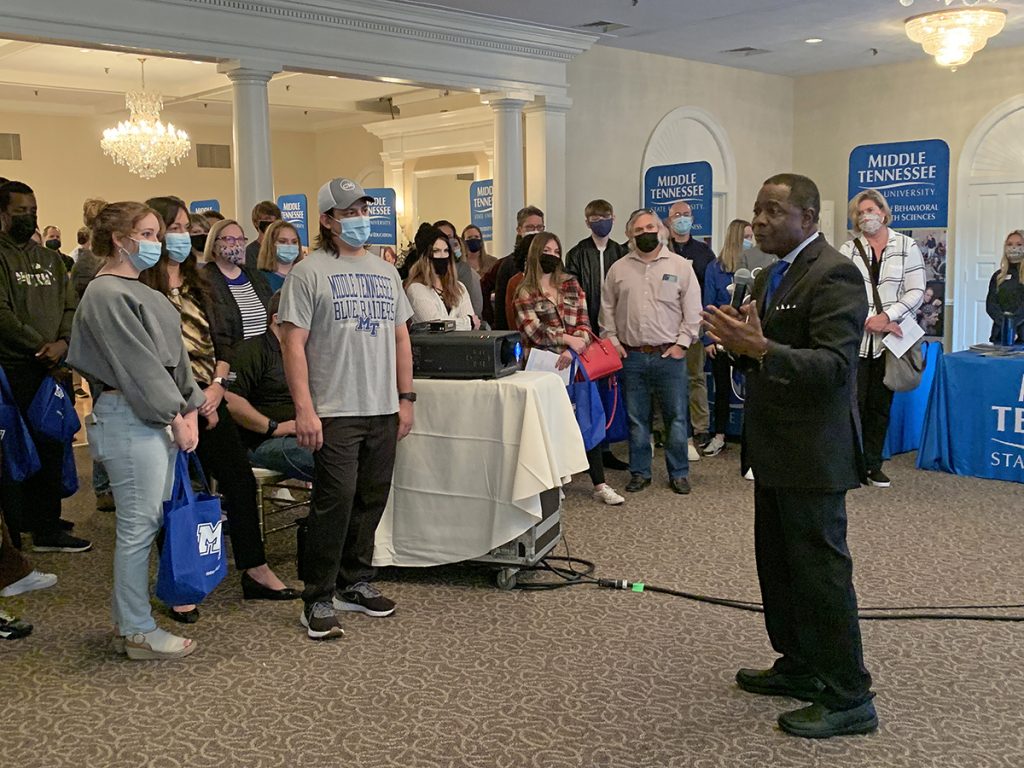 McPhee invited Beth White of Clinton, Tennessee, to speak to the Knoxville audience. She is education program manager at the Oak Ridge Institute for Science and Education, managing workforce development programs for the U.S. Dept. of Energy and Homeland Security.

White’s also the mother of Emily Bigler, 20, an MTSU sophomore political science and Spanish double major who is minoring in international affairs and is a part of the Honors College.

“Working with colleges and universities across the country and from my own educational experience, what that gives me is perspective,” she said. “I have had a great experience with MTSU — from admissions to financial aid to housing … the care and concern of the faculty and staff. Best customer service, hands down.

“The leadership Dr. McPhee models sets the standard for everybody else. The expectation is step up and do what’s right. … Whatever my concern or questions are, I’m always reassured.”

MTSU alumnus Katie Inman (Class of 2018), a WBIR-TV features reporter and new weekend anchor at the Knoxville station, told prospective students and parents/guardians how “MTSU was where I wanted to go” after graduating from Jefferson County High School.

“Make sure you step into that (College of) Media and Entertainment building when you visit. I received hands-on experience. I was a tour guide. … I was using the same equipment at MTSU as I am using now at the TV station. I’m a big advocate for MTSU. I don’t regret going to the middle part of the state (to attend college).”

MTSU offers a second True Blue Preview day of the fall Saturday, Nov. 6. Admissions will waive the application fee for those attending that day.

On deck: Memphis and Jackson 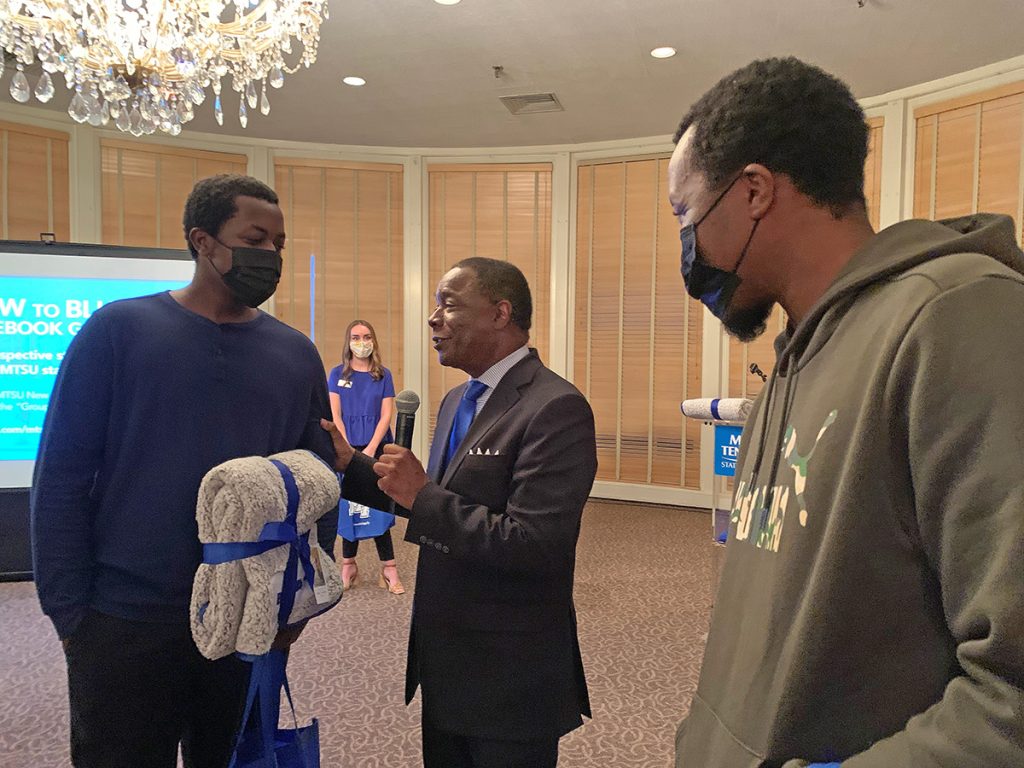