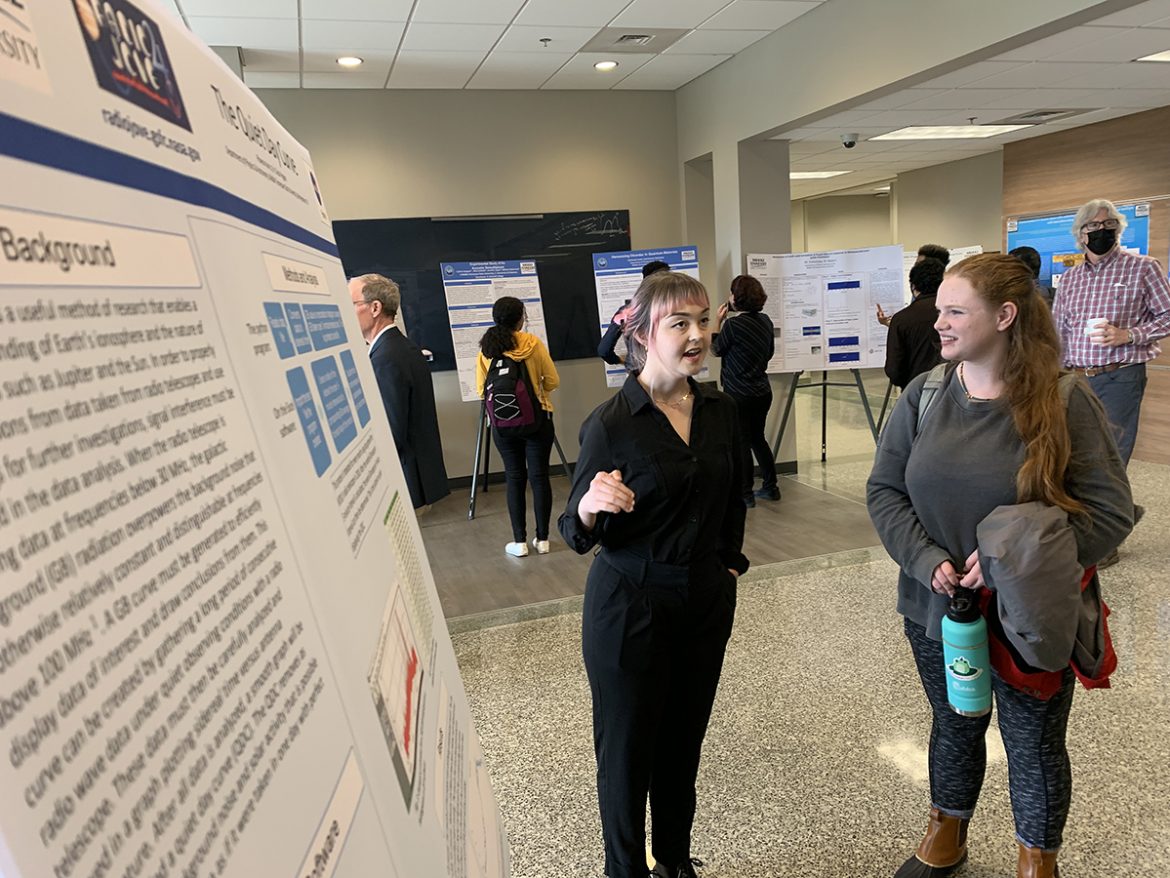 Addressing a group gathered for a first-ever MTSU Department of Physics and Astronomy research poster session recently, Chair Ron Henderson spoke of the past, acknowledged the present and looked toward the future for the small but growing program.

Henderson credited past Chair Robert Carlton for implementation of a thesis for undergraduates and praised assistant professor Hanna Terletska, who has gained national recognition for herself and MTSU through individual awards and research grants, for organizing the event in Wiser-Patten Science Hall. 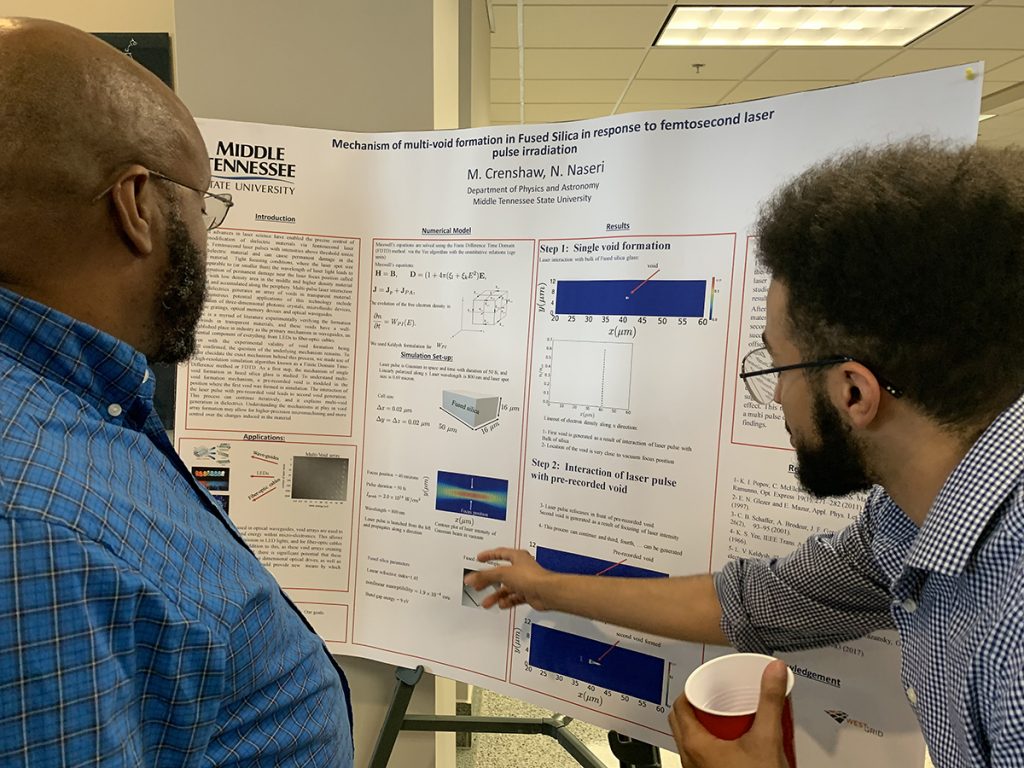 Henderson said the poster session, which drew 11 student and seven faculty posters, was “really fitting because we have had a focus on research more than any department on campus for over 20 years.” He lauded Carlton “for the amount of undergraduate research done on campus and instituting a thesis for majors.

“We’ve seen time and time again that when an undergraduate leaves their program and they have a research experience they can talk about, especially when they have a document (showing research they performed), it really propels them. It makes you more competitive for REUs (research experiences for undergraduates) and more competitive for graduate schools. We’ve seen great things come out of it.”

Terletska came to MTSU in 2017. Henderson said she “has elevated the discussions about research more and more. While we’ve valued research and faculty have been interacting with students, she’s helping us raise it to a level where our undergraduate teaching has been for a long time. We’ve always talked about teaching a lot among faculty. It’s been a value, but now we’re talking more about the importance of research and funded research for faculty.”

A Ukraine native, Terletska said “research has proven to play a significant role in student preparation and student success. All students who have done research perform better in classes and many of them go to graduate school and to top graduate school programs.

“Doing research plays an important role in faculty mentoring and student success overall. … This emphasizes that the physics department is very serious about research and we are a very active research department. As you can see from the posters, we have a very diverse field of research.” 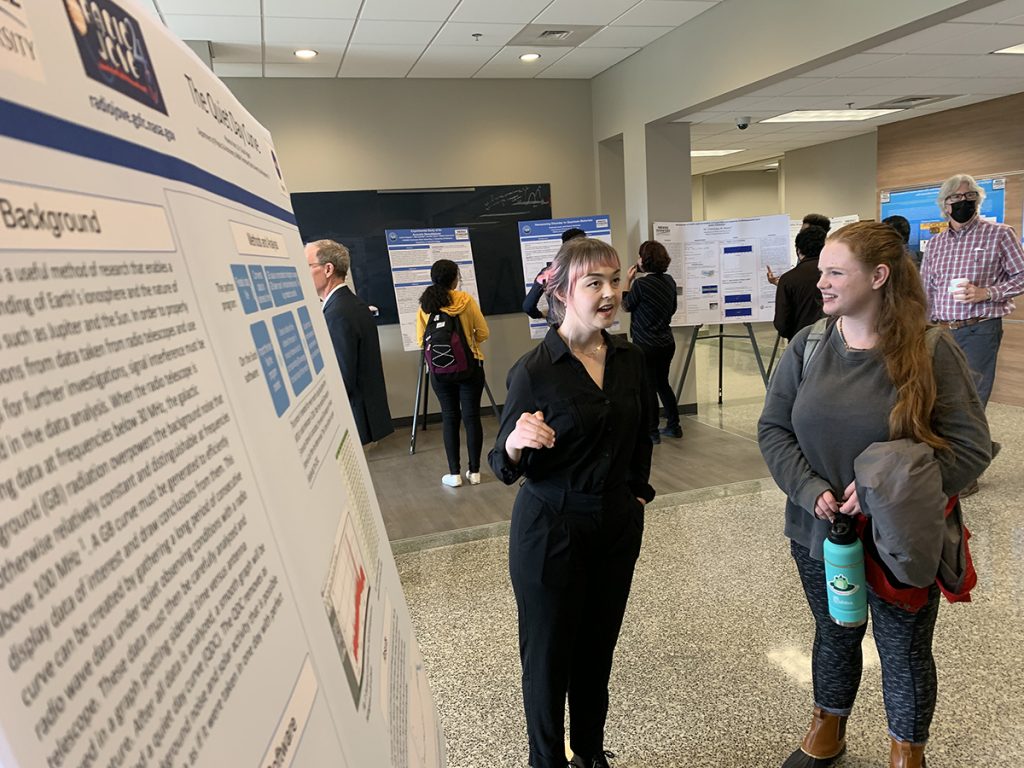 The March 17 poster session may have unexpectedly led to the recruitment of a new student to the program.

On her way recently to talk to Eric Klumpe, one of her professors in a required class, freshman Delana Howard walked up and encountered a small party gathered for the exhibit and Phoenix Harris standing with her poster about radio astronomy research. They began talking. Howard, a mechatronics engineering major, showed immediate interest.

“Look at all this cool, fun stuff (they’re doing in physics and astronomy). It is amazing,” said Howard, 19, of Murfreesboro, an Honors College Buchanan Fellow (the top MTSU scholarship limited to 20 students annually). “I’m thinking about changing my major to physics and astronomy.”

Harris, 24, a junior physics and astronomy major from Franklin, Tennessee, said her research experience with professor Chuck Higgins “has been great. He has been really helpful throughout the project with anything I need.” 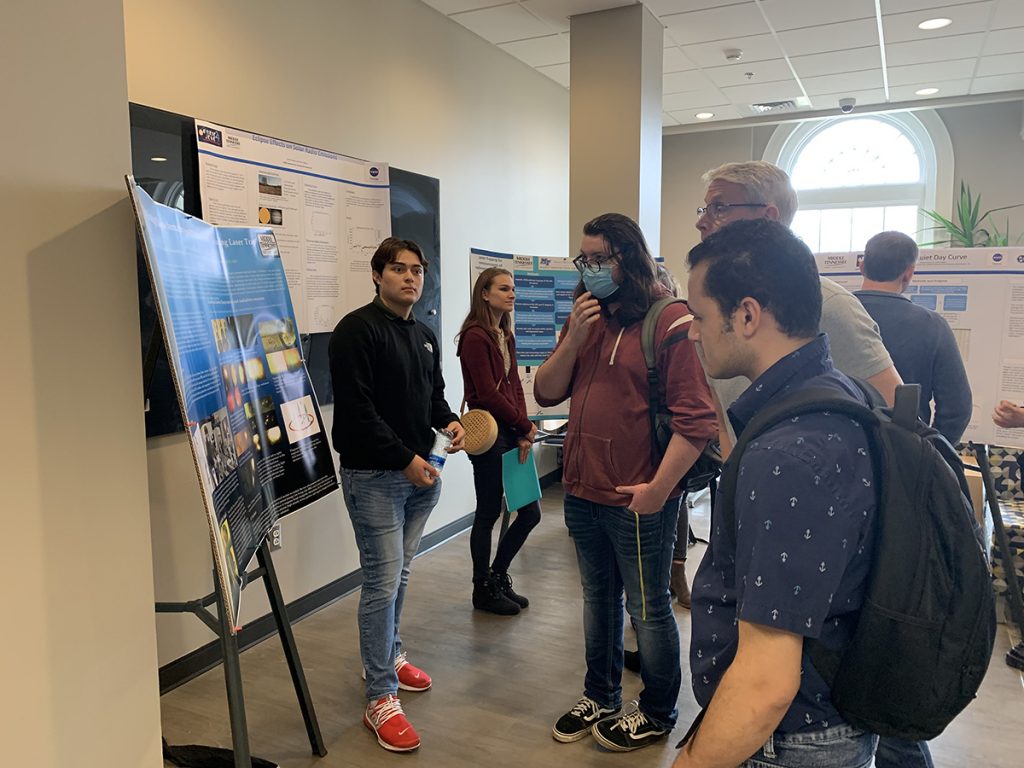 MTSU Department of Physics and Astronomy students and faculty attend the first-ever posters exhibit in Wiser-Patten Science Hall March 17. Faculty and administrators shared about the growth in research for the small but growing program. (MTSU photo by Randy Weiler)