Discover how an expert studies..

Learn about people behind the pink at Oct. 22 brea...

Learn about people behind the pink at Oct. 22 breast cancer forum 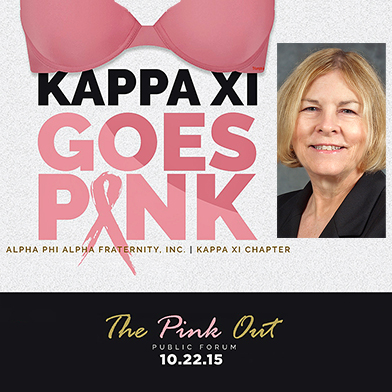 With everyone from local fundraisers to National Football League players wearing pink during Breast Cancer Awareness Month, a very special event at MTSU will enable everyone to peek behind the pink.

“The Pink Out,” a free public forum about breast cancer featuring a survivor, a surgeon and an exercise specialist, is slated for 7 to 8:30 p.m. Thursday, Oct. 22, in Room N109 of MTSU’s the Cason-Kennedy Nursing Building.

A searchable campus parking map is available at http://tinyurl.com/MTSUParking2015-16.

Dr. Cary Greenwood, an assistant professor in the MTSU School of Journalism, will go public for the first time with her personal story of discovering and surviving a tumor in her left breast.

“That isn’t something that I shared with a lot of people because, frankly, I had a lot to do and I needed to focus,” said Greenwood.

“My thought process was, if this could help someone, and if this is going to start additional awareness through an organization that is going to continue to promote it, it’s the right thing to do,” Greenwood said.

Joining Greenwood on the panel will be Dr. James Taylor Carter, a surgeon with Murfreesboro Medical Clinic, and Caleb Paschall, adaptive recreation and exercise coordinator at MTSU’s Campus Recreation Center.

Paschall worked with Greenwood on changing her weightlifting protocol following her lumpectomy and lymph node removal this past May.

“For cancer survivors, our training style allows … enough flexibility to restore function that may have been lost through treatment, rebuilding strength after chemo or surgery, for instance, as well as continuing to work toward more traditional goals like weight loss or improved muscle tone,” said Paschall.

“Breast cancer is one of the most fear-inducing diagnoses in a woman’s life and can occur at almost any time in her adult life,” added Carter. “Modern therapies can often turn the tide in the fight for a cure.”

Fitzgerald said he was inspired not only by his great-aunt’s death from breast cancer two years ago but also by the ordeal of the late ESPN sportscaster Stuart Scott, who died last January of colon cancer at the age of 49.

“He didn’t let cancer determine how he lived his life,” Fitzgerald said. “He fought it until God called him home.”

Scott, who was a member of Alpha Phi Alpha, received the Jimmy V Award at the ESPY Awards in July 2014 for his battle with cancer.

“You beat cancer by how you live, why you live and in the manner in which you live,” Scott said in his acceptance speech,

The MTSU forum will include a period for audience questions, answers and comments. Attendees are encouraged to wear pink to show support.