Learn about people behind the .. 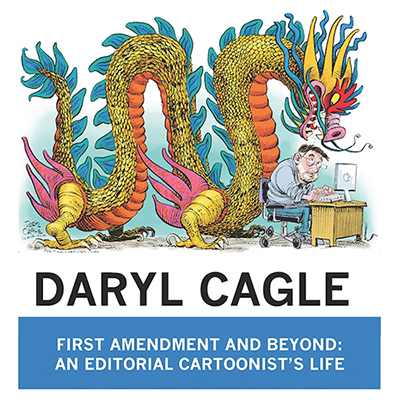 “First Amendment and Beyond: An Editorial Cartoonist’s Life” is set for 4:30 p.m. in Room 104 of the university’s Bragg Media and Entertainment Building.

A searchable campus parking map is available at http://tinyurl.com/MTSUParking2015-16. Off-campus visitors attending the event should obtain a special one-day permit from MTSU’s Office of Parking and Transportation at www.mtsu.edu/parking/visit.php.

Cagle is the publisher of Cagle.com and the owner of Cagle Cartoons Inc., a newspaper syndicate distributing editorial cartoons to more than 850 newspapers around the world. He has worked for Jim Henson’s The Muppets, MSNBC.com and Slate.com.

His work has been at the center of controversy, most notably in 2010 when his cartoon depicting the Mexican flag riddled with bullet holes in a pool of blood drew criticism from the Mexican government.

“It is the role of editorial cartoonists to criticize governments and nations, and to use the symbols of nations in our cartoons,” Cagle wrote in response to the outrage.

“Cartoonists all around the world use flags in their cartoons, and no country can opt out of criticism because they view their own flag as ‘sacred.’”

Cagle also wrote commentary on the terrorist attack on the Charlie Hebdo Magazine office in Paris. Twelve people were killed and 11 wounded in that Jan. 7 assault, including two of Cagle’s friends, Bernard “Tignous” Verlhac and Georges Wolinski.

“No one can doubt that editorial cartoonists are leading the fight for press freedoms now,” Cagle said of the attack.

The discussion is sponsored by the John Seigenthaler Chair of Excellence in First Amendment Studies at MTSU and the Communications Studies Student Club, MTSU University Honors College and the College of Media and Entertainment.

You can learn more about Cagle’s work at his website, www.cagle.com. Learn more about MTSU’s John Seigenthaler Chair of Excellence in First Amendment Studies at http://mtpress.mtsu.edu/seigenthaler.