MTSU’s new journalism director speaks to ‘MTSU On the Record’ 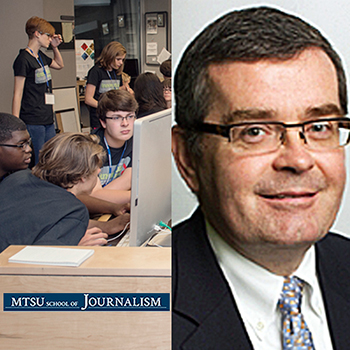 The MTSU School of Journalism’s new director was the guest on a recent edition of “MTSU On the Record” radio program.

Host Gina Logue’s interview with Dr. Gregory Pitts first aired Aug. 17 on WMOT-FM (89.5 and www.wmot.org ). You can listen to their conversation below.

Pitts, former chair of the Department of Communications at the University of North Alabama in Florence, Alabama, began his new job Aug. 1.

While at UNA, he guided the department to accreditation through the Accrediting Council on Education in Journalism and Mass Communications and paved the way for creation of a student-run radio station.

In groups of three, Midstate high school students attending the MTSU Innovation J-Camp edit their video projects July 16 in the Center for Innovation in Media in the John Bragg Mass Communication Building. The aspiring young journalists spent a week learning new skills that they can apply to their careers. (MTSU photo by Andy Heidt)

Pitts earned his bachelor’s and master’s degrees from Auburn University in 1982 and 1983, respectively, and his doctorate from the University of Tennessee-Knoxville in 1992.

Pitts replaces Dr. Dwight Brooks, who is now the new vice dean of Hofstra University’s Lawrence Herbert School of Communication in Hempstead, New York. Brooks served as professor and director of MTSU’s School of Journalism from July 2009 until July 2015.