MTSU professor to discuss ‘Old City Cemetery’ in A... 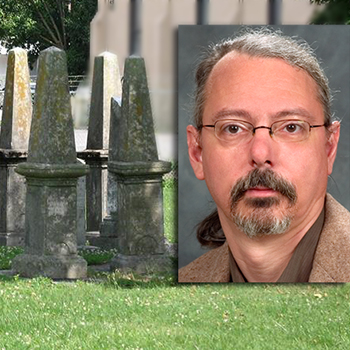 MTSU anthropology professor Dr. Kevin Smith will discuss the past of and future for Murfreesboro’s historic “Old City Cemetery” Thursday, Aug. 20, as the special guest of the Rutherford County Archaeological Society.

The free public discussion is set to begin at 6:30 p.m. Aug. 20 at the Heritage Center of Murfreesboro, located just off the Public Square at 225 W. College St.

Smith, a nationally recognized archaeologist and former chief of the anthropology program in MTSU’s Department of Sociology and Anthropology, will speak on “Two Centuries of Hallowed Ground: The Archaeology and History of Murfreesboro’s Old City Cemetery.”

Smith began teaching classes as an adjunct at MTSU in 1988 and has been a full-time faculty member since 1994. He first began working in 2003 at the Old First Presbyterian Church site on East Vine Street and its adjoining “burying ground,” circa 1820, with a student field crew to help contribute to Rutherford County’s upcoming bicentennial celebration.

The site also served as the temporary capitol building of Tennessee in 1822, after the Rutherford County Courthouse had burned, and eventually became the public burial ground for the city of Murfreesboro.

Smith’s presentation will address the archaeological projects in the Old City Cemetery and its significance as a founding location for Murfreesboro, the launch of President Andrew Jackson’s first election campaign and eventually the Trail of Tears, use as a hospital and its destruction during the Civil War, and the possible futures of the site.