Power of One coordinator fights gender-based violence, one event at a time 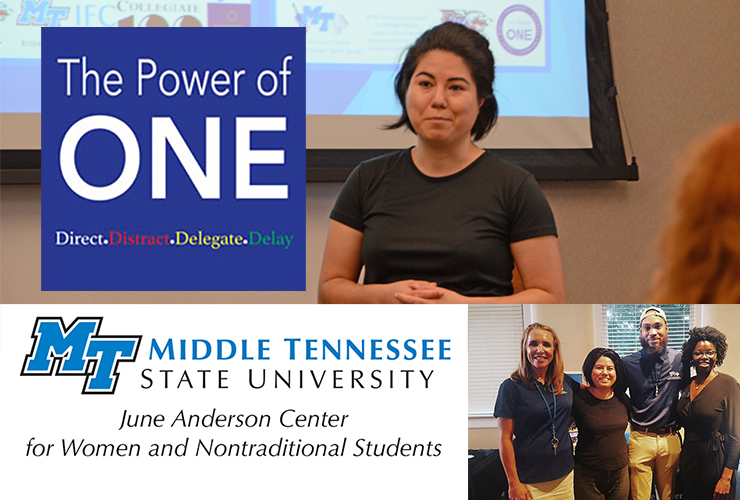 Kelly Hill sits in an office in the Center of Student Involvement and Leadership inside the Student Union with an engaging smile, her dark shoulder-length hair in a half up-do. Artwork and colorful flyers from events hang in her office.

Hill has been the Power of One prevention coordinator with the June Anderson Center for Women and Nontraditional Students for a year now and recently sat down to talk about her work coordinating events and workshops, including the “BaeWatch” Beach Party and “Stalking and You.”

“Students have been extremely receptive to the work we are doing on campus. They’re hungry for opportunities to talk about issues related to gender-based violence, survivor’s stories, consent, and relationships in academic forums and intimate workshops,” says Hill.

“[They] want to be active bystanders and help peers who are in potentially dangerous situations or relationships … They understand that this is an issue that effects their community and want to contribute to making a change in their campus culture.”

According to the 2019 Annual Security Report, 14 rapes (one off campus), 59 incidents of stalking and 26 incidents of dating violence were reported to MTSU University Police between January 2016 to December 2018. 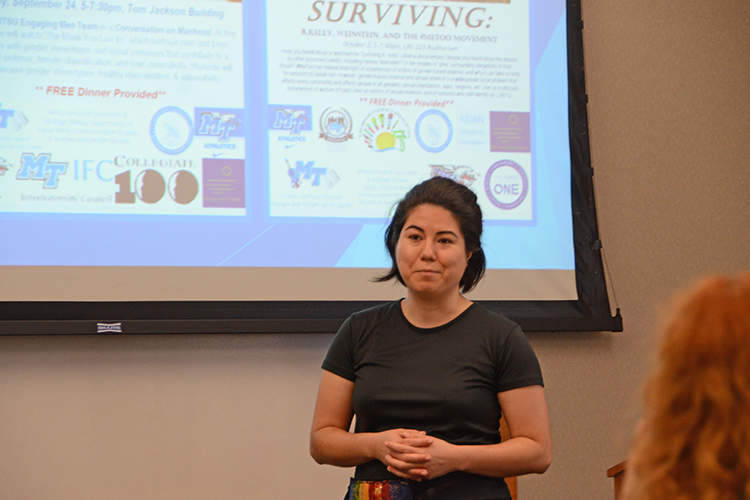 Kelly Hill, Power of One prevention coordinator with the June Anderson Center for Women and Nontraditional Students, provides an update during the September 2019 meeting of the Campus Comprehensive Response Team, whose members include faculty and staff, that guides students to various resources related to sexual assault prevention, working with law enforcement and engaging men in combatting gender-based violence. (MTSU photo by Jimmy Hart)

Hill’s position at MTSU was created through a $300,000 grant that the university received from the Office of Violence Against Women, or OVW, within the U.S. Department of Justice. This grant was written by former June Anderson Center Director Barbara Scales, in partnership with the MTSU Nonviolence Committee, Marian Wilson with Institutional Equity and Compliance, Office of Institutional Effectiveness, Office of Planning and Research, the Rutherford County Domestic Violence and Sexual Assault Center, Health Services, and campus law enforcement.

Make no mistake, Hill is no rookie to this line of work. Her experience with social justice issues goes back to her working as a public health educator and victim services advocate in Ohio. She also founded the Nashville chapter of National Asian Pacific Women’s Forum and the Ohio Progressive Asian Women’s Leadership, which Hill says “has grown to a statewide organization, with members in Columbus, Cleveland, and Cincinnati.”

Students like Brianna Guydon are seeing the impact the events and workshops hosted by Power of One can have on people. Guydon, a theater education major, has been working with Hill since January as the OVW student grant assistant.

“I assist her in the coordination and execution of bystander intervention and gender-based violence prevention programming. I even get to coordinate my own events!” says Guydon.

Guydon says she’s been moved to action by Hill’s workshops, specifically the escalation workshop, which focuses on dating violence as depicted in a short film with a discussion afterward. In the discussion, attendees are provided with information about the warning signs of abuse, tips on communicating with loved ones about abuse, and the differences between healthy and unhealthy relationships.

“The first time I left that workshop, I had tears in my eyes. I think it’s truly something that everyone needs to experience at least once in their life. It gave me clarity on past relationships and gave me things to watch out for in future ones. It absolutely makes you take a step back and reflect,” says Guydon. 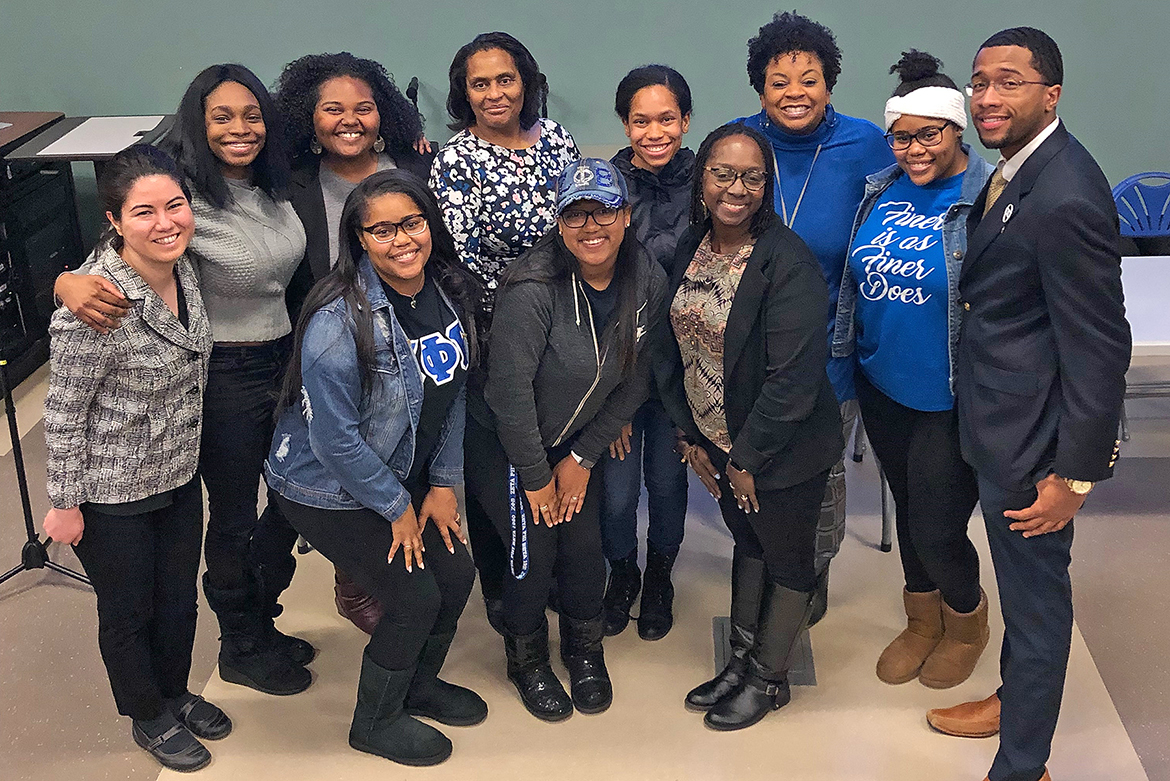 In this February 2019 photo, Kelly Hill, far left, Power of One prevention coordinator, is pictured with faculty, staff and student supporters of the campus screening of “The Rape of Recy Taylor” as part of the university’s Black History Month events. (Submitted photo)

Much of Hill’s work at MTSU is implemented through collaboration with other university offices and departments.

“The most rewarding aspect of my job has been building relationships with students and creating cross-campus and interdisciplinary collaborations where they didn’t exist before through initiatives such as our Engaging Men Committee, our interdisciplinary discussion series funded by MT Engage, and working to develop PSAs and a Power of One Mobile App through collaborations with the departments of Computer Science, English, Theatre, and the College of Media and Entertainment, “says Hill.

Last semester, Hill worked with students from the Computer Science Department to create a Power of One mobile beta app; this semester, they are working on an Apple version of the app. Once completed, the app will “promote a campus culture of bystander intervention and increase accessibility of on- and off- campus resources for survivors of gender-based violence.”

Hill is also working with the English department to create PSAs (public service announcement videos) for the Power of One by collaborating with Claudia Barnett, a professor in the English Department who teaches an advanced playwriting course. 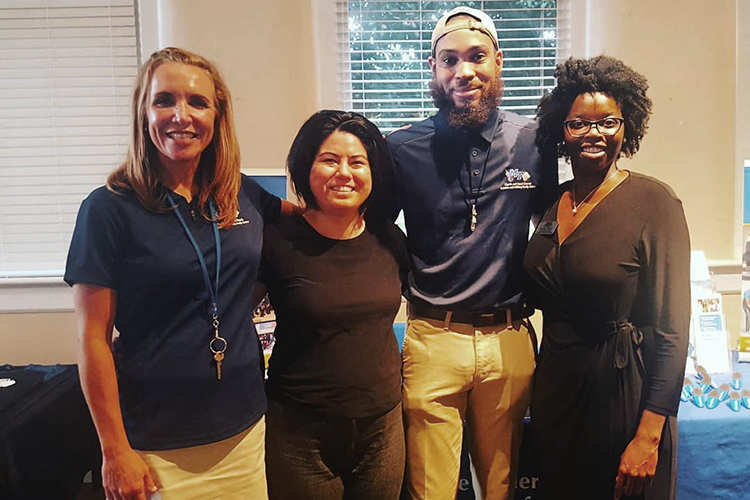 Kelly Hill, second from left, Power of One prevention coordinator with the June Anderson Center for Women and Nontraditional Students, poses with representatives from the Charlie and Hazel Daniels Veterans and Military Family Center, one of her campus partners. (Submitted photo)

Hill says she worked with Barnett to assign students to write skits relating to domestic violence, dating violence, sexual assault or stalking to be used for these PSAs. A few of these skits have now been selected for production. Hill says auditions are expected to be held soon for theater students as well as the hiring of a student videographer.

“I love trying to get people involved where they haven’t been before,” says Hill.

Hill has also assisted in coordinating events and workshops focused on engaging men in conversations about gender-based violence, such as A Mile in Her Shoes, which is an annual event hosted by the Inter-fraternity Council in the spring. This awareness walk is an international event in which both men and women walk a mile in heels in honor of promoting an end to sexual assault.

She also helped the MTSU Engaging Men Committee to coordinate The Mask You Live: A Conversation About Manhood, which provided a discussion afterward about the male stereotypes, peer pressure, gender-based violence, and issues that can impact men.

“[Kelly] is a very hard worker, giving 110% in everything she does. I’m looking forward to what she comes up with this year!” says Guydon. 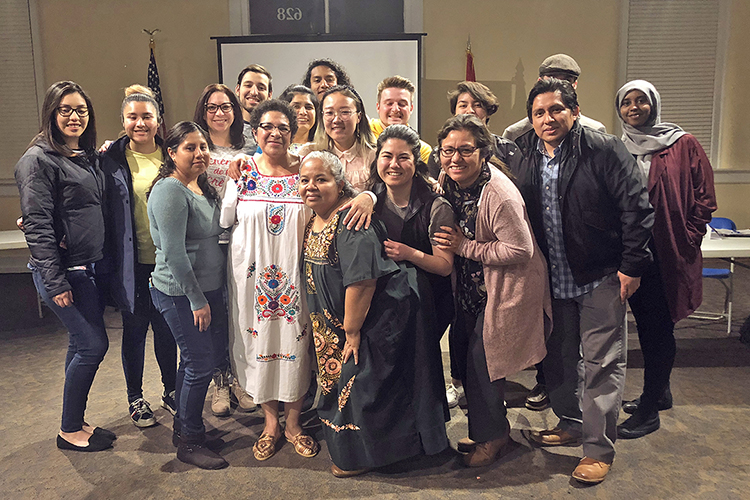 Kelly Hill, front row, fourth from left, Power of One prevention coordinator with the June Anderson Center for Women and Nontraditional Students, is pictured with members and supports of the La Communidad student organization in this undated photo. (Submitted photo)

Hill’s work is continuing this year as the Power of One is collaborating with on-campus and community partners to host a campuswide interdisciplinary series in the spring around “The Color Purple,” an award-winning novel written by Alice Walker in 1982 that tells the story of African-American women who are abused and struggle to discover their own empowerment.

The series, part of Black and Women’s History Months in 2020, will include a multi-generational “Campus Community Conversation” on gender roles, relationship expectations throughout generations, warning signs of unhealthy relationships, masculinity, male dominance, sisterhood and the overall power of of healing.

Power of One is also aiming to provide scholarships to 50 MTSU students to attend a theatrical performance of “The Color of Purple” at the Tennessee Performing Arts Center. An online streaming version is available for free to the campus community with an MTSU login, courtesy of the James E. Walker Library.

Also in recognition of the campuswide series, Walker Library will be providing a book display on black women authors.

With a year under her belt as the coordinator of Power of One and the campuswide CCRT, Hill has set her sights on creating a safer community.

“Our goal is the reduction of sexual assault, domestic violence, dating violence and stalking in our community,” she says. “We want to provide a timely, culturally relevant, and respectful response to gender-based violence, and engaging students with seamless, consistent, and supportive prevention education and resources. After the grant period is over, our goal is for our work to be sustained through the continued support of the university.”

For more information about the Power of One initiative, go to www.mtsu.edu/powerof1. 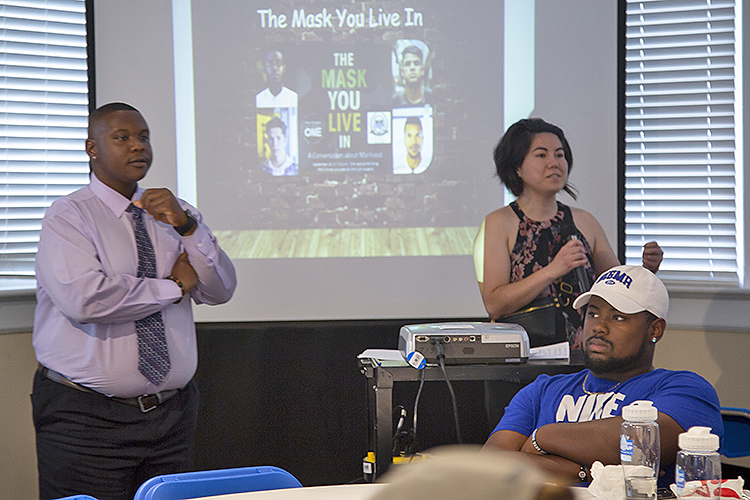 Kelly Hill, right, Power of One prevention coordinator with the June Anderson Center for Women and Nontraditional Students, facilitates “The Mask You Live In: A Conversation on Manhood” discussion in late September inside the Tom Jackson Building with Travis Strattion, left, assistant manager with the Scholars Academy. (Submitted photo)