Power of One coordinator fight.. 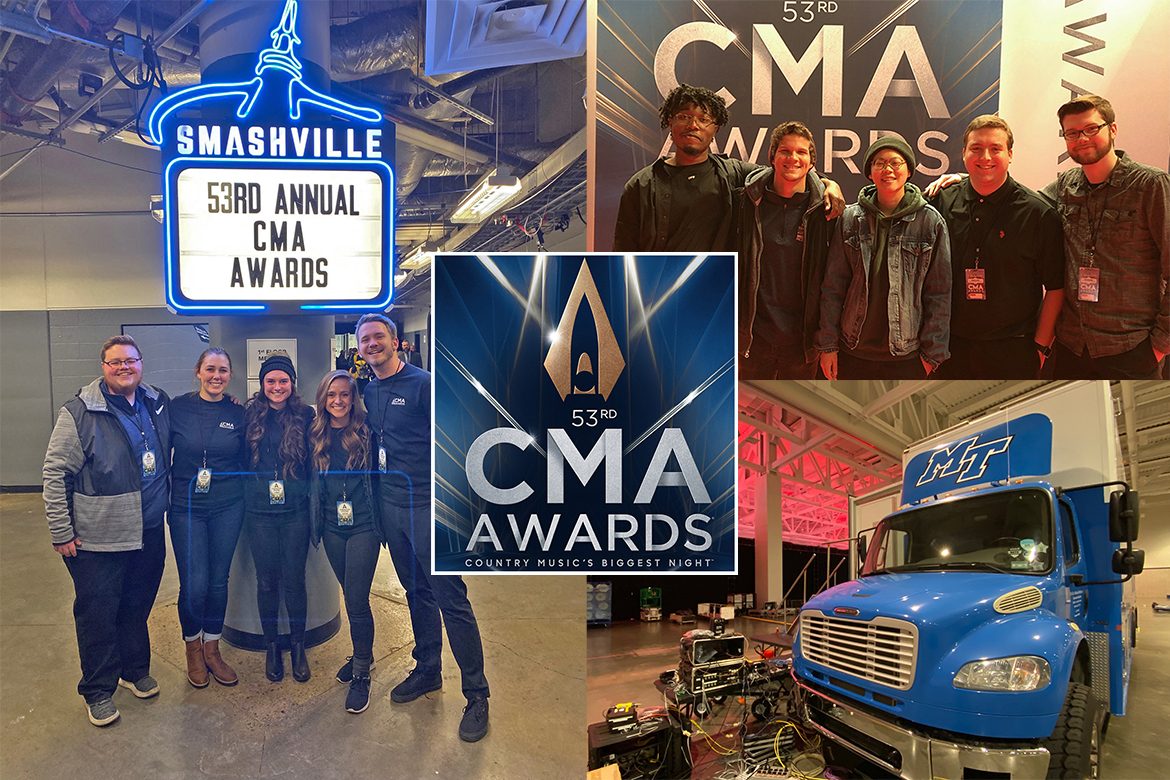 NASHVILLE, Tenn. — Thirteen students from MTSU’s Department of Media Arts honed their skills further recently by working as pre-show or telecast crew members for the 53rd annual Country Music Awards, one of the genre’s biggest events.

Associate professor Robert Gordon said the students, who are all studying multi-camera television production, were selected from the crew that did telecasts for ESPN Plus of Blue Raider volleyball and soccer games this season.

Eight MTSU students worked the Nov. 13 awards show at Bridgestone Arena as talent production assistants, while five other students worked on the red carpet show production, which proceeded the national telecast on ABC of the CMA Awards. Using MTSU’s mobile production truck, the pre-show was produced by WKRN in Nashville (Channel 2) and shared with 30 ABC affiliate stations across the nation, Gordon said.

“The MTSU Media Arts Television Production program has a blessed relationship with the Country Music Association and their award show production staff,” he said. 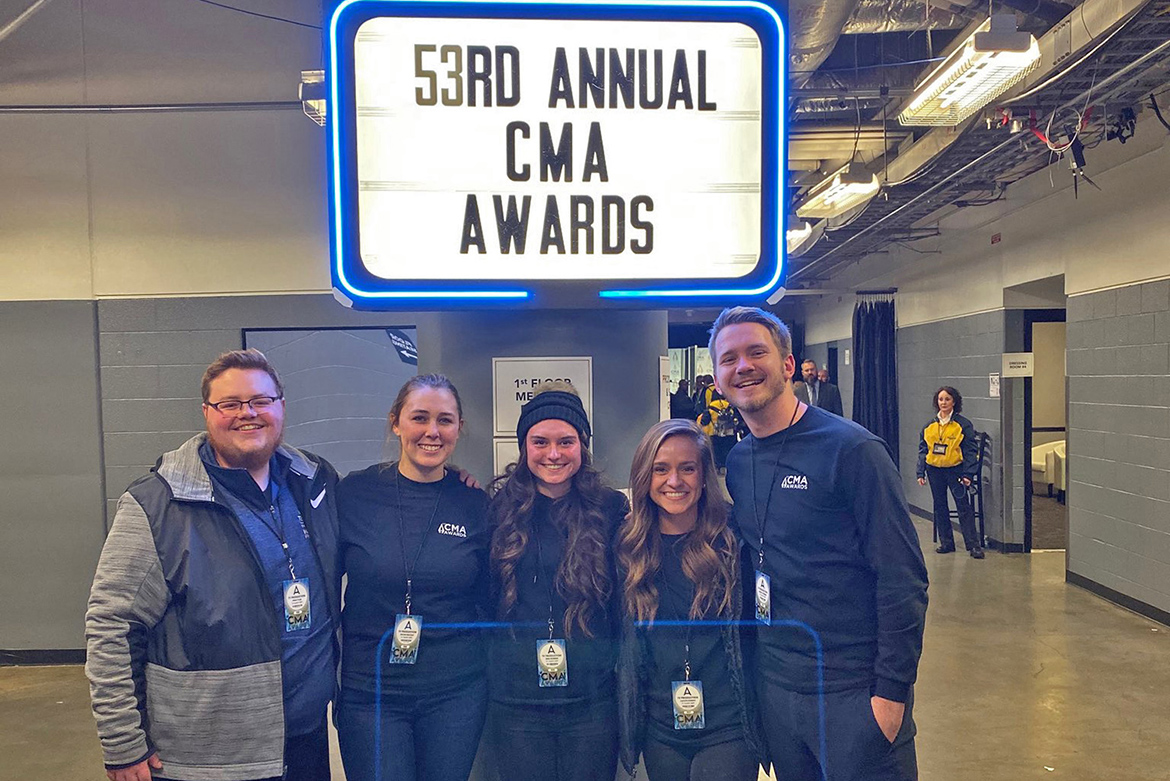 Robbins, a video and film production major from Cookeville, Tennessee, said her MTSU training such as working the ESPN+ productions prepared her well for the hectic awards show environment and “how all the moving parts come together to make the show possible.”

“Getting to work the CMA Awards was a dream come true. Growing up, my family and I have watched the show every year for as long as I can remember,” she said. “It has always been a dream of mine to be able to contribute to the show in some way. This show has meant so much to me for so many years and now, to be a part of the team that makes it happen, is so rewarding.” 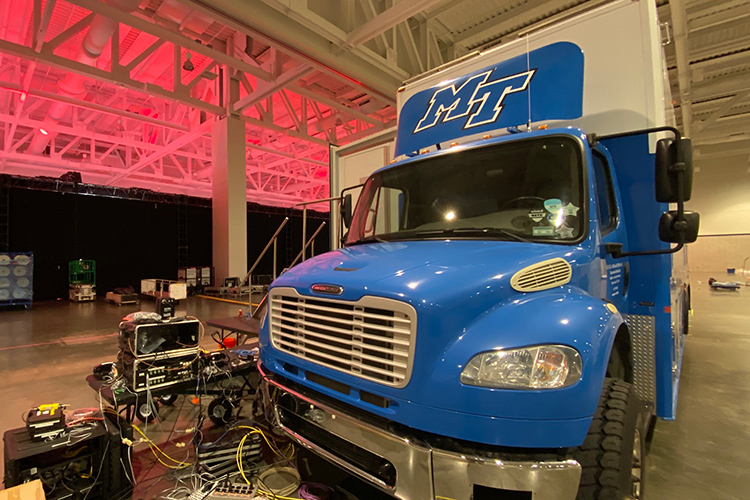 MTSU’s Mobile Production Truck is shown at the Bridgestone Arena in Nashville, Tenn., the site of the 53rd annual Country Music Awards. The truck was used by a group of MTSU students who helped with this year’s pre-show, which was produced by WKRN in Nashville and shared with affiliates. (Submitted photo)

Tyler, a junior from Brentwood, Tenn., who also serves as MTSU Media Arts productions director as well as the MT10 general manager, said the pace of such a large show, with so many moving parts, “would get intense” as he and other students ensured that artists, band members and presenters were transported to the correct locations at the correct times.

“The most intense part was show day as dress rehearsal happened because everyone who was involved in the show had to be on site,” he said. “I did feel prepared. It felt great to be a part of such a huge production, one of the biggest of the year.”

Gordon said he was also able to take some of the students to rehearsals the day before with the show to meet CMA CEO Sarah Trahern as well as other CMA management and production team members.

“This is yet another example of how MTSU gives students realistic and professional experiences and connections to best prepare them for their careers,” Gordon said.

The CMA participation mirrors similar experiential learning opportunities for students designed or guided by MTSU’s College of Media and Entertainment at the Grammys, the Academy of Country Music Awards and the Americana Music Association.

One of the largest communication programs in the nation, the college offers degree concentrations in 14 major areas — ranging from journalism to digital media and media management to recording industry management — and is accredited by the Association for Education in Journalism and Mass Communication.

In addition to the Department of Media Arts, the college includes a Department of Recording Industry and a School of Journalism and Strategic Media and offers Bachelor of Science degrees in media and entertainment, animation, video and film production, interactive media, journalism, recording industry and audio production; a Master of Fine Arts in Recording Arts Technologies degree; and a Master of Science in Media and Communication. 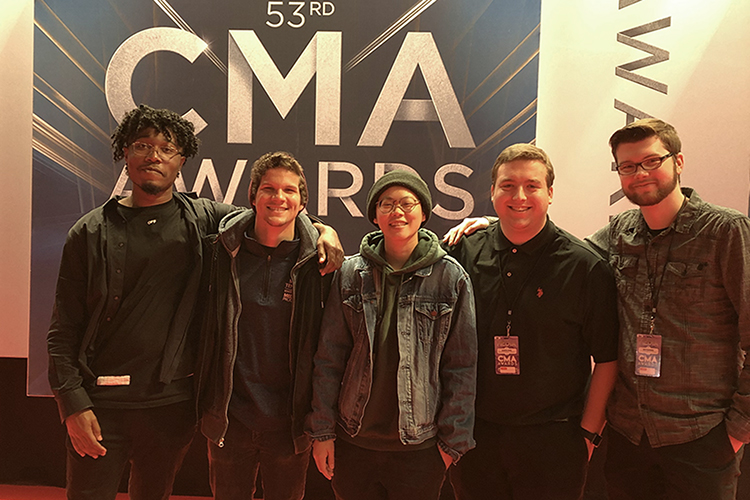 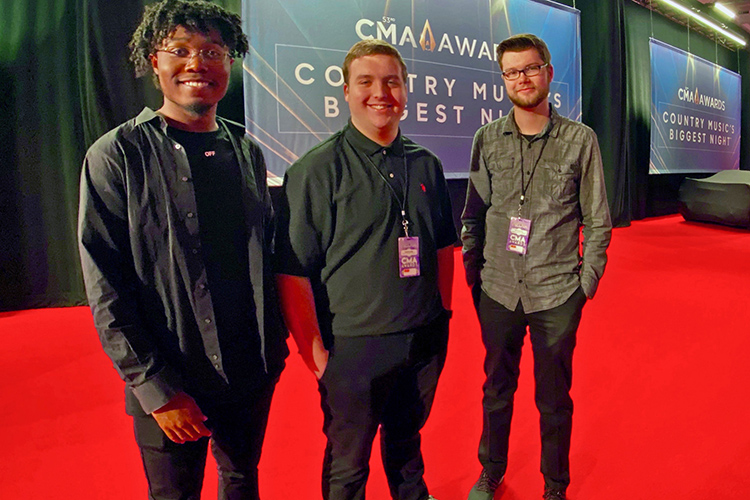 A group of MTSU media arts students helped with the production and telecast of the 53rd annual Country Music Awards held recently at Bridgestone Arena in Nashville, Tenn. Pictured inside the arena, from left, are students Kendrick Howard, Dakota Russ and Seth Sanders. (Submitted photo)