From paper art to vampire slay.. 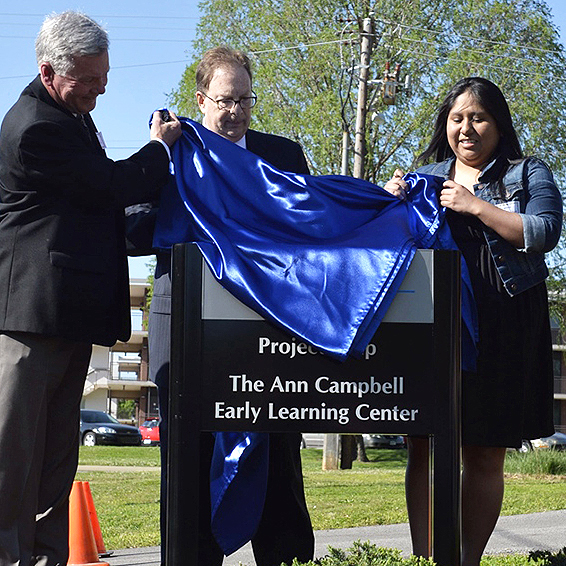 After more than 30 years with a name that announced its goals, MTSU’s Project Help is taking the name of its founder and its expanded services.

The university unveiled a new sign April 25 at the North Baird Lane headquarters for Rutherford County’s only community- and center-based program helping very young children, including those with special needs.

“There’s a quote that’s hung in my office for probably 30 years, and I think it’s so fitting today when we think of Dr. Campbell’s work,” said Dr. Lana Seivers, dean of MTSU’s College of Education and former state commissioner of education, at the special celebration.

“It says, ‘May He who has chosen to limit some of His children be merciful enough to guide the hands of those entrusted with their care.’ We’re so thankful that Ann Campbell was entrusted with caring for our youngest and most special children.”

You can watch a video from the ceremony, which welcomed dozens of friends, family members, students, teachers and even some Project Help graduates, below.

Campbell, who passed away in 2011, was posthumously recognized for her dedication to childhood education by a special joint resolution in this year’s session of the Tennessee General Assembly. Gov. Bill Haslam signed the proclamation April 10.

The Lenoir City, Tenn., native spent her career creating groundbreaking opportunities for children with special educational needs and their teachers. After stints in Arkansas and Memphis, Campbell came to MTSU in 1981 as one of only two professors of special education and immediately saw the desperate need for a developmental preschool in Murfreesboro.

By 1983, she had created “Project HELP” — Help Educate Little People — at MTSU to provide a classroom environment for preschool children with special needs and a training ground for early education majors.

“This program was in place three years prior to the federal law mandating services for very young children with developmental delays before they reached school age,” said Dr. Brad Bartel, university provost. “During her time at MTSU, Ann procured and managed — and this is amazing! — more than $23 million in federal, state and private grants to support early childhood intervention programs.

“Who better to bridge the social gaps that lead to academic problems, family disruptions and bullying? Children teaching children diversity, helpfulness and acceptance: very much the goal of everything we do here at MTSU.”

Dr. Lana Seivers, dean of MTSU’s College of Education, speaks about the founder of the university’s unique inclusive preschool program for young children, Project Help, at a ceremony Friday renaming it as the Ann Campbell Early Learning Center. Campbell, who died in 2011, is shown in the portrait at Seivers’ right.

Campbell initially ran the program out of two boxes in the trunk of her car. Its first permanent home was a kindergarten classroom at Homer Pittard Campus School, and Project Help moved several times when larger campus quarters became available.

She led the effort to fund, design and construct a freestanding building for the program on North Baird Lane, which opened in 1997.

The program became a model for other programs across the state, and its continuing growth led to a 2007 expansion into a second MTSU location in the Fairview Building.

Campbell taught classes and served as director of Project Help until 2000, when she passed the torch to the first official full-time director, Debbie Bauder. Bauder returned to the classroom in 2006, making room for the current director, Susan Waldrop.

“Renaming this program also reflects the continued expansion of the comprehensive services we offer to the community’s children and families, as well as our long-range goal to ultimately operate a comprehensive one-stop, wrap-around educational and therapeutic program for families across Middle Tennessee,” Waldrop said at the April 25 event.

The Campbell Early Learning Center at MTSU provides classes for children ages 3 months to kindergarten, where little ones with developmental delays play and learn with those who are developing typically.

The Yellow Room, formerly known as “Project Help Prep,” in the Fairview Center helps 3-, 4- and 5-year-olds get ready for public school.

The program also provides home-based services for families of children from birth to age 3 who have developmental delays. It’s affiliated with the Tennessee Early Intervention System and provides hands-on learning experiences for MTSU and Motlow State Community College’s Nursing Program students who work with the children and staff.

“All of us like to think that we’ve made a difference in the world. I think very few of us can hope for the kind of living legacy that Dr. Campbell’s hands guided through this work. It is work that so many people will witness and benefit from, and our future is exciting and bright.”

For more details about the Ann Campbell Early Learning Center at MTSU and its services, visit www.mtsu.edu/ProjectHelp. Check out the link to its Facebook page, too, for some great photos of the people, big and little, and their activities.