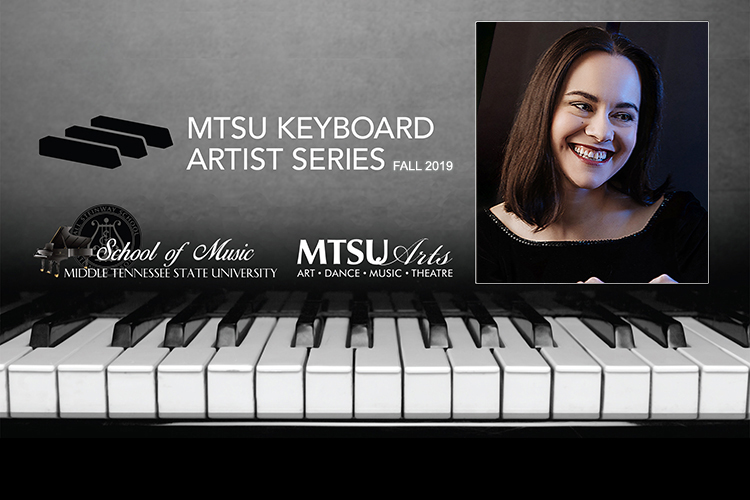 The MTSU School of Music’s popular “Keyboard Artist Series” will welcome internationally acclaimed pianist Daria Rabotkina to the Wright Music Building Friday, Oct. 18, for a public concert featuring the works of Schubert and Beethoven as well as modern composers Griffes and Aurandt. 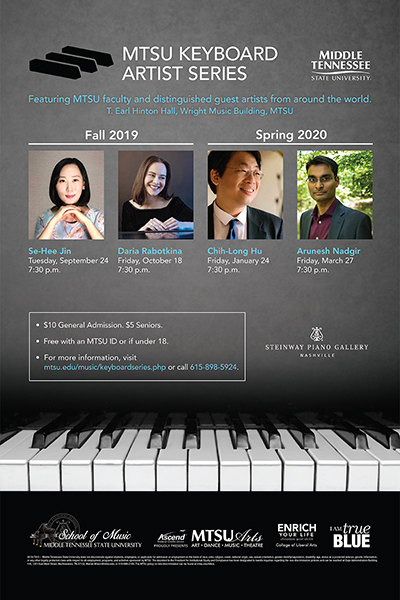 Rabotkina’s performance will begin at 7:30 p.m. Oct. 18 in Hinton Hall inside the Wright Music Building, 1439 Faulkinberry Drive. A campus map is available at http://bit.ly/MTSUParkingMap.

Admission is $10 for adults and $5 for seniors. Children under age 18 will be admitted free, as will MTSU students, faculty and staff with current IDs. Tickets, which help fund the Keyboard Artist Series, will be available at the door.

The 2019-20 concert series, sponsored in part by the Steinway Piano Gallery of Nashville and now in its fifth season, features MTSU faculty and distinguished guest artists from around the world.

Rabotkina, winner of the 2007 Concert Artists Guild International Competition among many international contest prizes, has performed in festivals in her home nation of Russia and in Finland and Denmark as well as at the Rockport Chamber Music Festival, PianoSummer at New Paltz and the San Francisco International Piano Festival in the United States.

Born in Kazan, Russia, into a family of musicians, Rabotkina presented her first solo recital at age 10. She now holds a doctorate in musical arts from the Eastman School of Music and now is an assistant professor of piano at Texas State University in San Marcos. Passionate about early piano education and musical opportunities for young people, she founded the FunKey Piano Project at Texas State in 2018.

“I am looking forward to hearing Rabotkina perform this program,” said Dr. Arunesh Nadgir, coordinator of keyboard studies at MTSU.

“She always performs with great passion and dazzling virtuosity, and her program for this recital is very interesting and offers a wide variety of sound and color that the audience will surely enjoy.”

A preview of Rabotkina’s talent, captured during her performance of Sergei Rachmaninoff’s Humoresque, Op. 10, at the 2017 Copenhagen Summer Festival, is available below.

The Keyboard Artist Series season will continue Friday, Jan. 24, with a concert in Hinton Hall by Chih-Long Hu, the Sandra G. Powell Endowed Professor of Piano at the University of Tennessee School of Music, and a Friday, March 27, concert by Nadgir.

For more information on MTSU’s Keyboard Artist Series, visit www.mtsu.edu/music/keyboardseries.php. For details on other School of Music events, call 615-898-2493 or visit the  “Concert Calendar” link.