In the News: MTSU experts addr.. 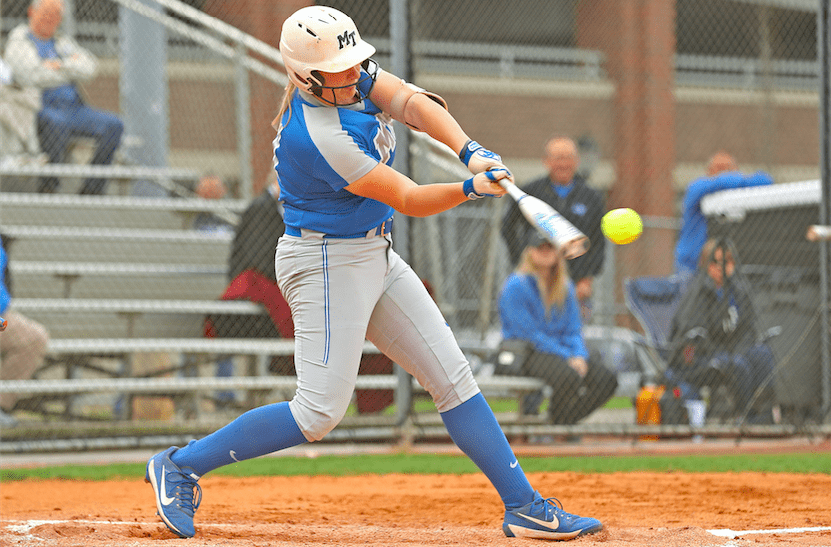 I didn’t know it at the time, but now that I reflect on my athletic upbringing, softball was destined to be the focal point of my sports career. It has had a bigger impact on my life than just about anything else. I have encountered thousands of girls playing the sport, and to think out of all of the talent, I was one of the very few to achieve every little player’s dream: Division-1 collegiate softball.

Lexi Cushing at a softball tournament with her parents, John and Jennifer.

I was born in Enid, Oklahoma, a small town basically in the middle of nowhere. From there, my family moved to Parker, Colorado, then a few years later to Flower Mound, Texas, which is where we currently live. I have been very fortunate to have two parents that were present and supported everything my brother and I wanted to do.

I have tried my hand in many different activities, from soccer to tennis, to karate, to even orchestra, but my talents were best displayed when I was on the basketball court and, obviously, the softball/baseball field.

It all started when I was 5 years old at my older brother’s baseball practice. I was messing around with a bat wanted to hit some balls. After this practice, I was on my brother’s tee ball team. I would play on my first softball team a couple years later when my family moved to Texas.

My brother, Jack, and I were both multiple sports athletes growing up, but we both figured out what we wanted to do in high school. He wanted to continue his career as a baseball pitcher, giving up football, and I was a softball player, giving up basketball. Since my brother was 18 months older and a school year above me, naturally, my parents worked at getting him recruited first. He committed to play baseball at Georgetown University the August he started his senior year of high school. Now that he was taken care of, my dad was able to move on to focus on me. However, I was already about to start my junior year, and I was basically at ground zero.

Lexi and her brother (Jack) take pictures at their high school fields.

If you are not familiar with the softball recruiting process, it begins a bit before many of the other sports. Big time schools such as Alabama, Oklahoma, Florida, and many others in the power 5 conferences, have already finished their recruiting classes for seniors, juniors, sophomores, and most freshmen. This means that they are basically looking for freshmen and middle schoolers. Since they recruit so young, all of the other universities have no other choice but to do the same, so they are not far behind, recruiting mostly sophomores. When I learned this, not going to lie, I began to panic. What if nobody has room for me? My parents and travel coaches worked hard to get schools to look at me. The most difficult part, however, was that I didn’t want to go to school in Texas, so it was even more of a stretch. One of the biggest softball tournaments is in the Denver area every year. This is where Coach Breeden and Coach Foti saw me first. When one of my travel coaches told me that a school was interested, it was hard to contain my excitement. When he told me it was Middle Tennessee State, the excitement grew. One, it was a division one school, which was the goal, and two, it just so happened to be the school that my father and aunt attended. I kept in contact with the coaches throughout the rest of the summer, and a few weeks before my senior year began, I committed.

Since I was such a late find, there was one catch: there was no more athletic money for me. This was a little disappointing, but I had good grades so I was able to get a decent amount of money in an academic scholarship. On top of that, I knew if I came in and performed well, I could earn athletic money for my sophomore year. And that is just what I did. At my end of the year meeting with the coaches I was offered an athletic scholarship, and just like that, I was no longer a walk-on.

There are countless stories of how many athletes are unhappy at their school or don’t mesh well with their team and end up transferring or stay and remain unhappy, which would lead to a bad college experience. I consider myself extremely lucky that I found a place that I love and with people and teammates that I have grown to love like family. With my father and his family having roots in the Middle Tennessee area (Shelbyville, Murfreesboro, Nashville), I could see myself staying here long after my college softball career is over.

If you are an athlete here at MTSU and have a story you are willing to share, please contact Stephen Smith at raiderstribune@mtsu.edu.