In the News: Corporate welfare..

‘MTSU On the Record’ reveals p..

MTSU students, alumni and friends celebrated a “True Boo” Homecoming 2021 — despite a day-long rain — and the Blue Raiders 35-10 victory against visiting Southern Mississippi made for an even happier occasion.

The in-person MTSU Homecoming Parade returned for the first time since 2019 following a year off because of COVID-19. Students, alumni, families, friends and Blue Raider supporters tailgated, posed for photos and reminisced about school days past and present to wrap up the week of activities. (See a full photo gallery at bottom of this story.) 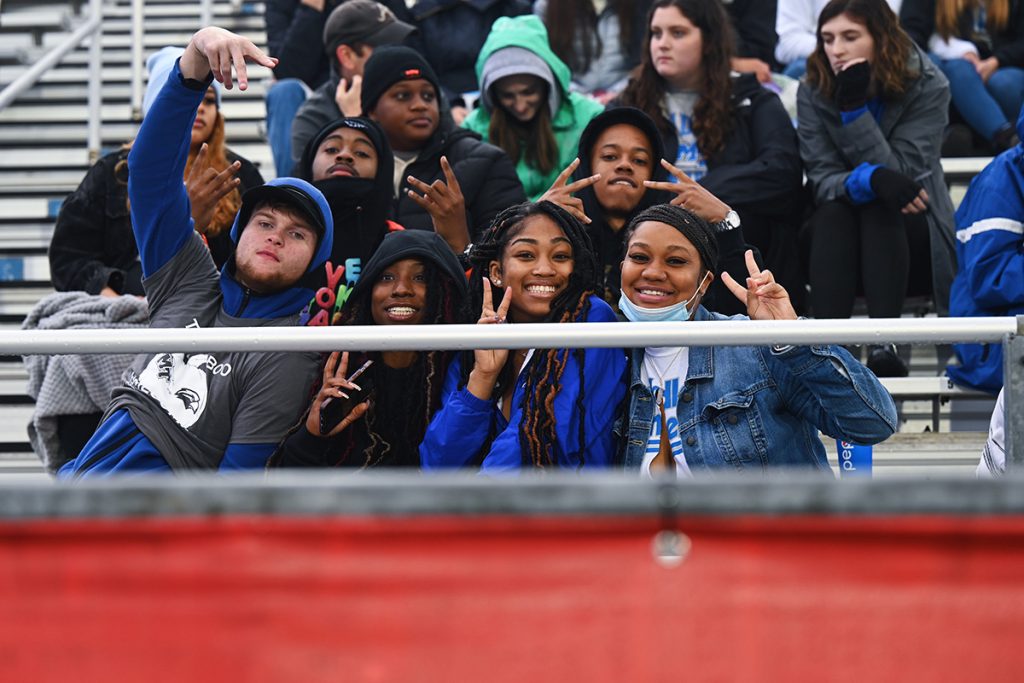 MTSU students walk with their float they created for the 2021 Homecoming Parade down Middle Tennessee Boulevard in fron of The Alumni House. Rain did not dampen the spirits of those attending the annual event, held in-person after a one-year break because of COVID-19. (MTSU photo by J. Intintoli)

Homecoming is a way for everyone connected to the university to celebrate the decades of traditions — food, fun and fellowship at various activities throughout the week.

“Through the raindrops, everyone who attended homecoming events were smiling and so happy to be on campus,” said Rhonda King, Office of Alumni Relations assistant director. “It’s always an honor to hosts alumni on campus.”

MTSU’s Student Government Association, in partnership with the Signature Events Committee and Student Programming and Raider Entertainment (SPARE), also coordinated various student-oriented events throughout the week including a concert, step show, and a pumpkin patch decoration activity and yard party in and around the Student Union. 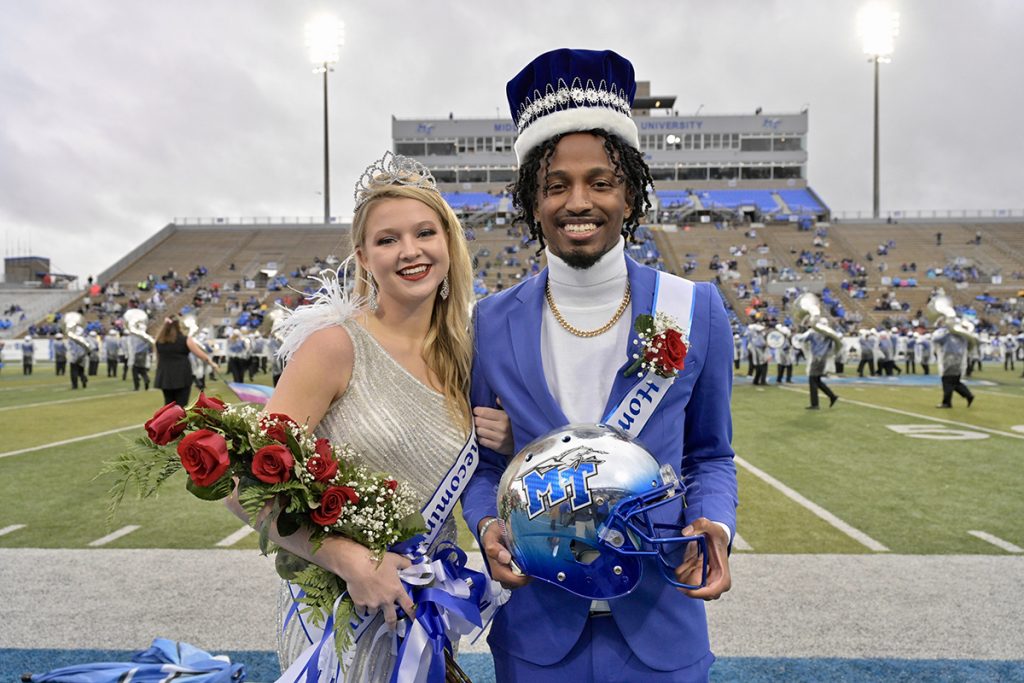 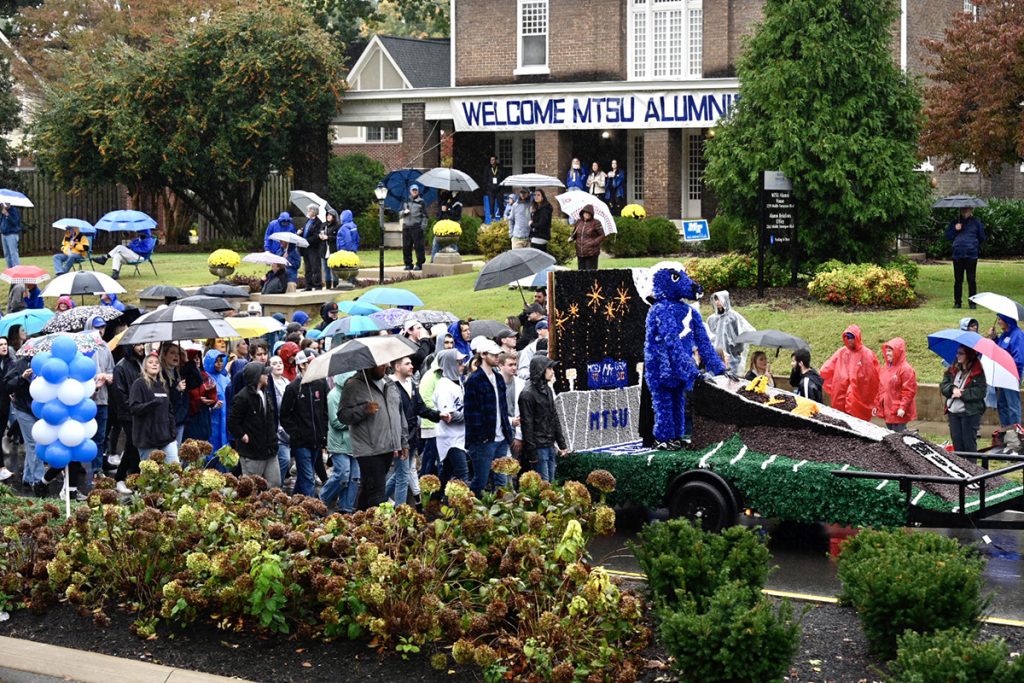 MTSU students walk with their float they created for the 2021 Homecoming Parade down Middle Tennessee Boulevard in front of The Alumni House. Rain did not dampen the spirits of those attending the annual event, held in-person after a one-year break because of COVID-19. (MTSU photo by J. Intintoli)

And, as is tradition, the 2021 Homecoming king and queen were announced at the football game inside Floyd Stadium, with students Joshua Gray and Ashlee Dunn accepting their crowns from MTSU President Sidney A. McPhee and first lady Elizabeth McPhee on Jones Field.

Both seniors, Dunn is a mechatronics engineering major from Jackson, Tennessee, while Gray is a recording industry/commercial songwriting major from St. Louis, Missouri. 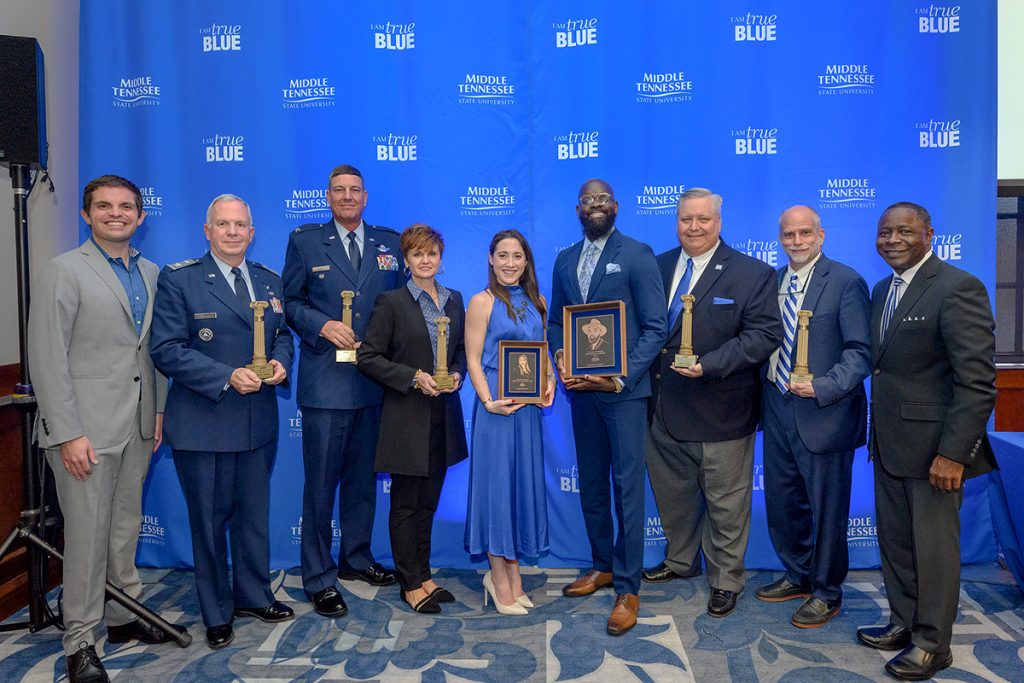 For the eighth year, True Blue Citations of Distinction were awarded. Categories, including a new one for Military Service, and this year’s honorees include: 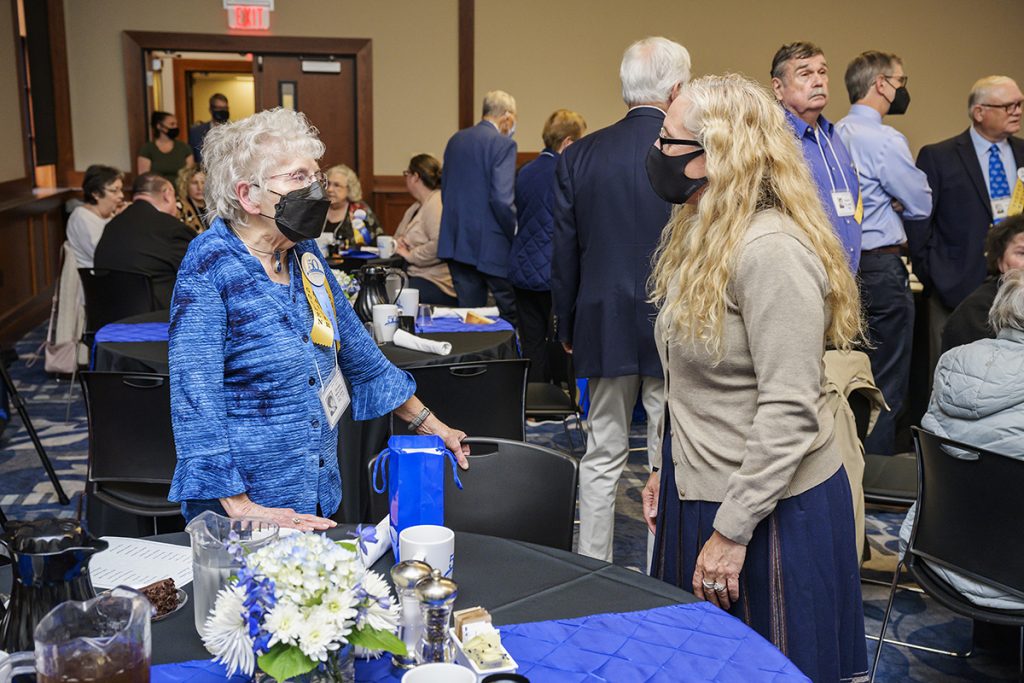 Suma Clark, left, former director of the MTSU Department of Publications and Graphics (now Creative Marketing Solutions) visits with Kathleen Schmand, dean of the James E. Walker Library, Friday, Oct. 29, during the Golden Raiders reunion. The Classes of 1970-71 and beyond were recognized this year during homecoming. (MTSU photo by Andy Heidt)

Because COVID curtailed 2020 Homecoming activities, the National Alumni Association brought together the Classes of 1970 and ’71 and beyond for a dual Golden Raiders get-together.

Dozens of Golden Raiders gathered Friday, Oct. 29, for the festivities.

“Our Golden Raiders relived their college days and were amazed at the growth and progress of their alma mater,” King said. “It was heartwarming to visit with Golden Raiders who graduated in 1971, 1970 and many years prior.”