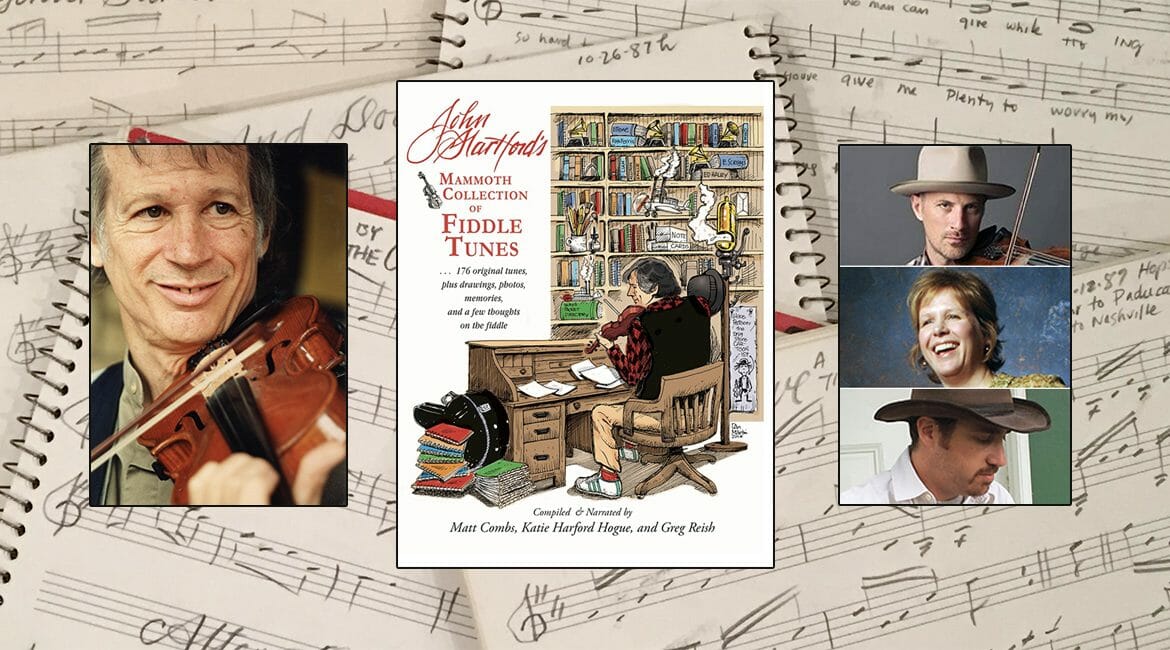 A wealth of previously undiscovered creativity from the pen of one of America’s most original musicians will come to light this summer with help from MTSU.

Click on the book cover to learn more about “John Hartford’s Mammoth Collection of Fiddle Tunes.”

The book will be available at bookstores starting Monday, June 4.

Hartford, perhaps best known for penning the Glen Campbell hit “Gentle on My Mind,” died of non-Hodgkin’s lymphoma in 2001. He left behind more than 1,000 unpublished and unperformed tunes, which now are protected by copyright.

The book contains 176 of Hartford’s original fiddle tunes and more than 60 of his drawings and photos previously seen only by family members.

“The narrative in the book is focused primarily on John’s life with the fiddle,” Reish said. “He’s known, I would say first and foremost, as a banjo player and a songwriter, but also a fiddle fanatic.”

You can hear Reish and Combs play “Go Home to Your Mother,” one of Hartford’s original fiddle tunes included in the new collection, in the video below.

Reish and his co-authors worked on the book for more than a year and a half, and Reish interviewed Hartford’s family, friends and fellow musicians, including luminaries such as Marty Stuart and Bela Fleck.

A man of wide-ranging intellectual curiosity, Hartford wrote music that combined a reverence for the traditional with contemporary twists that revealed a lifelong love affair with words.

“His lyrics could be delightfully weird, eccentric at times, but always thought-provoking,” Reish said. “There’s always something distinctive and original in John’s music, and that’s true of his instrumental tunes as much as it is of the songs with words.”

As part of the “Newgrass” movement of the 1970s, Hartford’s authenticity gained currency with the counterculture generation that yearned for something genuine in their music.

Reish asserts that, because Hartford was both a free spirit and a deep thinker, he is as much of an influence today as he was during his lifetime.

The Center for Popular Music now houses a donated treasure trove of Hartford’s papers, pictures, index cards and music manuscript books, which will be made available to students and other scholars for study.

The project isn’t the first connecting Hartford with MTSU’s Center for Popular Music.

In January 2016, the center’s Grammy-winning documentary label, Spring Fed Records, released “Home Made Sugar and a Puncheon Floor,” a set of home recordings made by Hartford and fiddling legend Howdy Forrester, to great acclaim.

In that collection of 20 previously unreleased traditional tunes, Hartford plays banjo, Forrester fiddles, and the two share informal discussion about the songs and their sources on the record. You can learn more about it here.

Forrester, the longtime fiddler in Roy Acuff’s band, was one of the most well-known traditional musicians that Hartford visited throughout his career, always recording their conversations and jam sessions.

To contact the MTSU Center for Popular Music, call 615-898-2449, send an email to popular.music@mtsu.edu or visit www.mtsu.edu/popmusic.