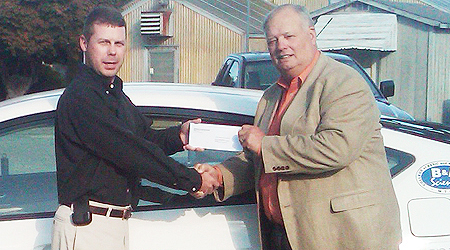 Funding for the trips grew with the announcement of a $15,000 grant from Farm Credit Services of Mid-America and additional financial support from the MTSU provost and the University’s Office of Research.

“I appreciate Farm Credit Services’ confidence in one of their own. We (the Ricketts family) have borrowed from them for 50 years,” the professor said of the grant.

“I’m appreciative of the ag industry supporting a professor doing a very creative thing that emphasizes the importance of agriscience.”

Ricketts, joined by a team of eight to 10 students traveling in a van, plans to drive a 1998 Toyota Prius converted hybrid from Savannah, Ga., to Long Beach, Calif., during spring break. The car will be powered by hydrogen, solar energy, ethanol and less than 10 gallons of gasoline, Ricketts said.

Ricketts said his 2013 plans include a cross-country trip using sunlight and water-derived hydrogen.

MTSU alumnus Jack Swanson (’96), one of Ricketts’ former students and a Farm Credit assistant vice president, presented the FCS check. Swanson has served as the lending officer for Ricketts, whose family has received a Heritage Farm Award as 50-year, third-generation Farm Credit customers.

In addition to his alternative-fuel work, Ricketts raises beef cattle.

“I couldn’t think of anything that would be a better use of our stewardship funds,” Swanson said in a Farm Credit Services news release. “The crux of Dr. Ricketts’ program is to help make the U.S. energy independent. It’s part of our mission to give back some of our earnings to those programs that fuel the future of agriculture.”

The School of Agribusiness and Agriscience professor has always been in the forefront of alternative fuels exploration. In November 2010, he drove a 1994 Toyota Tercel from Bristol to West Memphis, Ark., using sunlight and hydrogen from water.