For Roland Martin, the key to improving African Americans’ lives is neither black nor white, but green.

The accomplished journalist and commentator and host of the “Roland Martin Unfiltered” digital program delivered a virtual “State of the African American Union” address Feb. 26 to wrap up MTSU’s celebration of Black History Month. 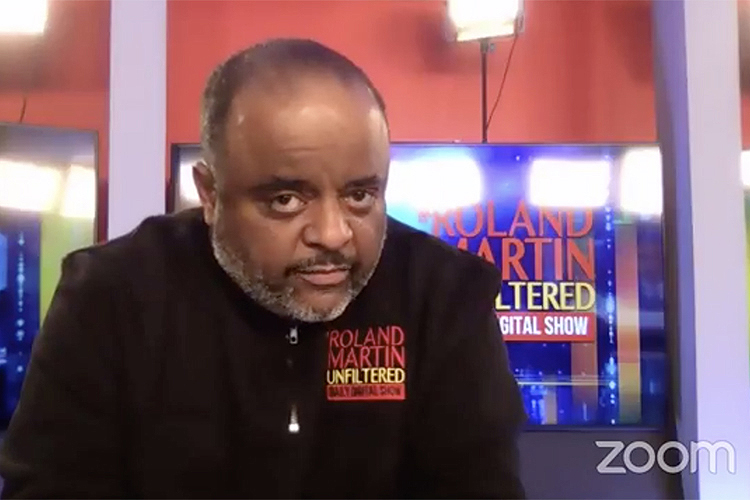 “We have the opportunity to change the game for our community,” Martin said. “But the only way that happens (is) if we are committed people who are willing to put something on the line and not be afraid to speak truth to power.”

Martin called on the virtual audience members to take “a 360-degree view of the money” and become “economic social justice freedom fighters” by asking pointed questions about how much both education and capitalism welcome African American involvement.

Although Black people do not fully use all the economic power they hold, they should insist upon more business commitments to Black vendors, Black board members and Black executives, Martin said.

“We are being completely shut out of the economic process in this country, and here we are in 2021 being excited when we see somebody Black on TV,” said Martin, who also answered pre-recorded questions from student representatives of sororities and fraternities within the university’s National Pan-Hellenic Council.

Calling the post-Civil War era the first Reconstruction and the civil rights movement of the 1950s and 1960s the second Reconstruction, Martin called for what he referred to as a “third Reconstruction” with an emphasis on monetary power.

Martin said Black and brown people, who make up the majority of government workers and who have money in mutual funds and pension funds, should realize their money is being used for the venture capital that fuels Wall Street.

Martin also called for a “reprogramming of America” in which self-worth replaces self-identification through the purchase of luxury items. Additionally, he advocated replacing public servants who are not serving the people who empower them.

The former host of “NewsOne Now” on TV One, a cable television channel that targets an African American audience, Martin also provided commentary on CNN for six years.

The Department of History, along with the Black History Month Committee and the Distinguished Lecture Committee, sponsored the event. Daniel Green, director of the Office of Intercultural and Diversity Affairs, and Dr. Aaron Treadwell, assistant professor of history, co-moderated the Q&A portion of the address.