In the News: Vaccines, Faceboo..

When Katrina Scott spent a semester studying abroad in Fall 2019, she had a mission beyond immersing herself in a foreign culture and picking up French as a second major.

As a Visual Arts major and Honors College student at MTSU, Scott needed a topic for her Honors thesis project. She was hoping to find inspiration while studying at the Université de Caen Normandie, located in a small port city in northern France. 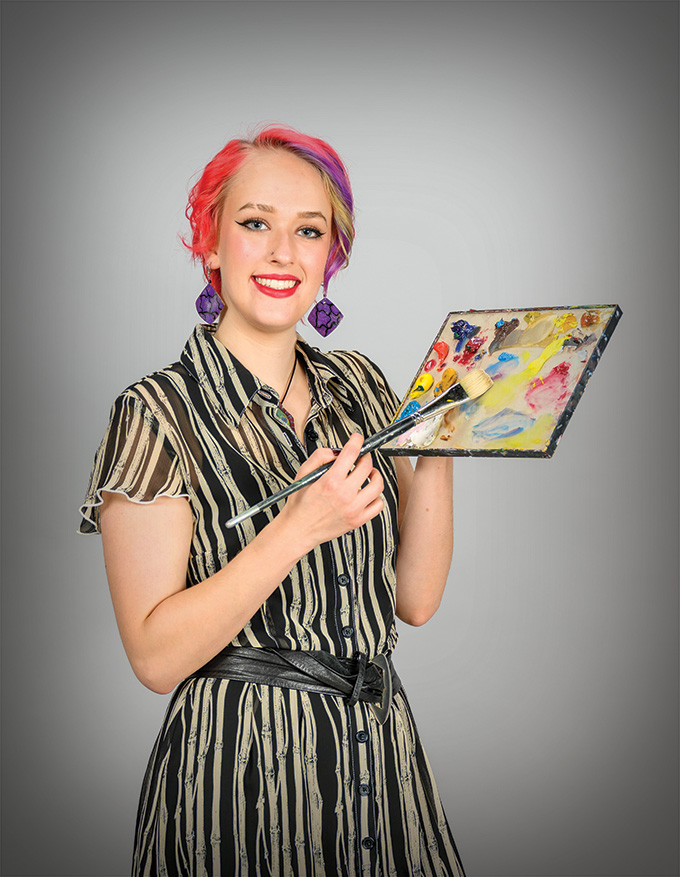 The idea came to her when she teamed up on a project with a campus group that advocates for women’s rights—and then, with that experience fresh in mind, she took a whirlwind tour of art museums in Italy. She was struck by the ubiquity of a certain theme.

“I saw so many pieces like The Rape of the Sabine Women, all these representations of women being persecuted and oppressed throughout history,” she said. “I wanted to change that narrative and talk about women’s power.”

Artists were our storytellers long before writers were, and visual narratives are often far more elaborate than any arrangement of words. The four works Scott was inspired to create for her Honors project are no exception.

“I wanted these pieces to be a little obscure, to invite the viewer to ask questions,” she said. “I really want it to open up a conversation and let people have a takeaway of confronting their own values and beliefs about women and women’s role in society—and what that looks like.”

Each piece was produced as a series of layers: a 16-by-20-inch hard board canvas painted with an oil wash; then covered in paper collage, including bits of pictures and text from vintage books; and followed by oil paint mixed with various media, including a cold wax medium, which produces heavily textured brush strokes.

The focus of each is a single animal—hare, alligator, wolf, snake—set against a backdrop of evocative plant imagery and found art. Together, the pieces change the story about what’s possible for women: subjugation, but then awareness, anger, renewal. 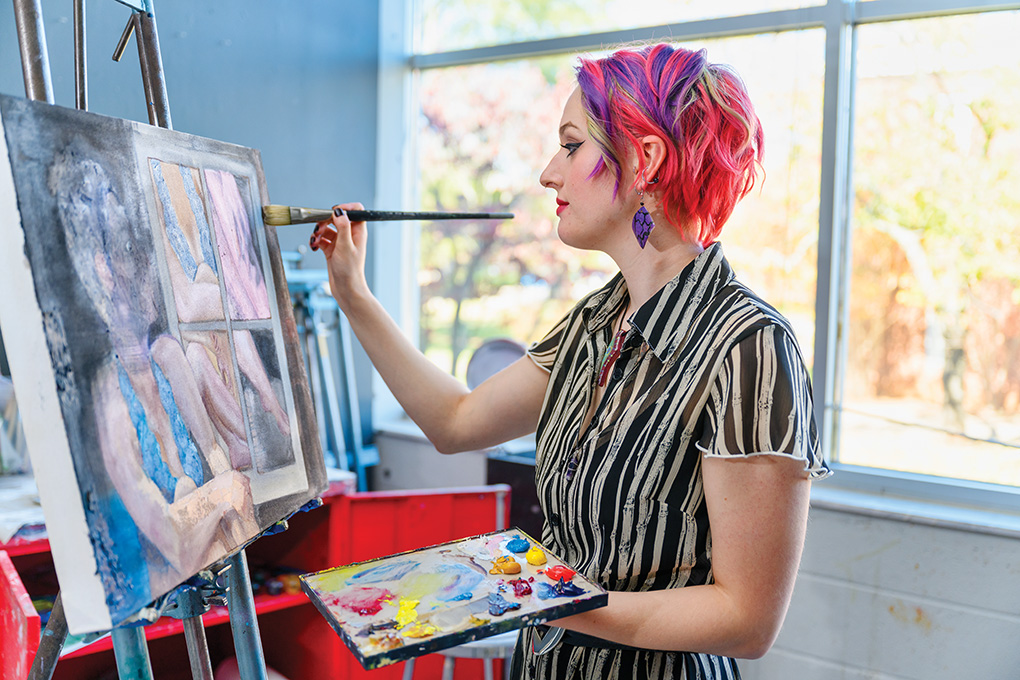 Scott said she understands that cycle because she’s been through it. Although she was always a high-achieving student, she says her self-worth was undermined for years by teachings at an extremely conservative religious school she attended in Knoxville.

When she came to MTSU, Scott had every reason to be confident—she had received a Buchanan Fellowship, the University’s top academic award for incoming freshmen—but she also was carrying some heavy baggage.

“I was taught some really messed-up things about what it meant to be a woman and what my duties were as a woman, and how it was my responsibility to keep men in check, and my freshman year I experienced a series of harmful situations with men that I blamed myself for,” Scott said.

Ultimately she recognized that she was both damaging and limiting herself by accepting what she’d been taught.

“I just felt so angry that I missed out on so much because of that narrative,” she said.

Scott’s minor coursework in Psychology may have helped her tease apart the threads of experience and emotion, cause and effect. She knows it helped her recast the feminine story, which she conveys through her series of mixed-media paintings. 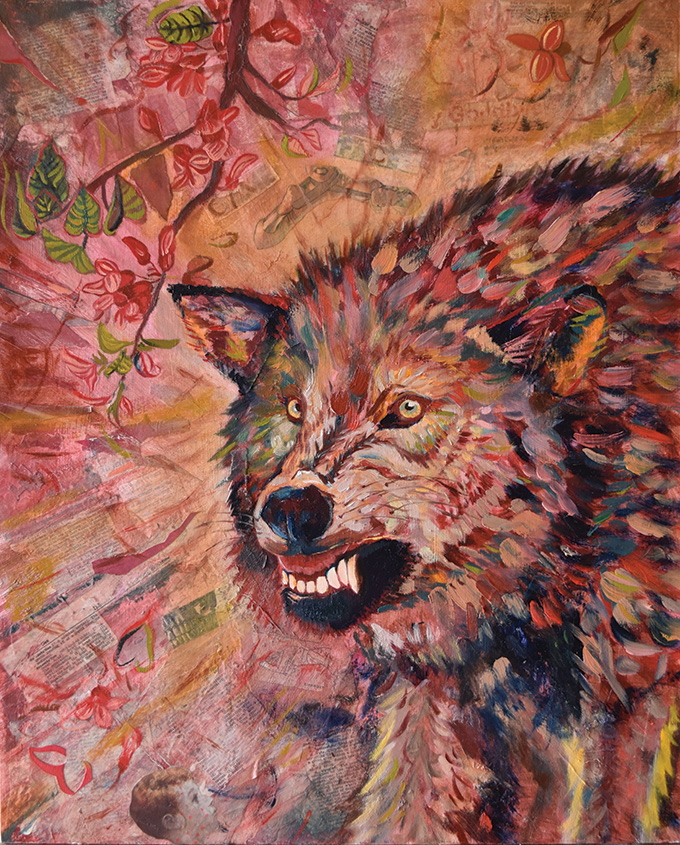 And so the fearful hare in the first painting gives way to the watchful alligator, which represents “the decision point in a situation where you’re trying to scope out the best course of action,” Scott said. The wolf—her favorite piece, done in chunky strokes of teal and pink—is lashing out in self-defense or perhaps maternal rage. Then there’s the final piece, in cool blues and greens: a snake shedding its skin.

“I was interested in challenging people’s perceptions,” she said. “A wolf is traditionally seen as a powerful symbol, and I wanted to reinterpret that as female power. And people sometimes see snakes as negative, deceptive, but there’s evidence in history of snakes being guardians and positive symbols.

“The shedding of the skin specifically—there was a period in my life when I was dealing with a lot of trauma, and I remember feeling like I wanted to shed my skin and become a different person that hadn’t had those experiences.

I chose the snake instead of the butterfly because it shows that it’s still the same person at the core. 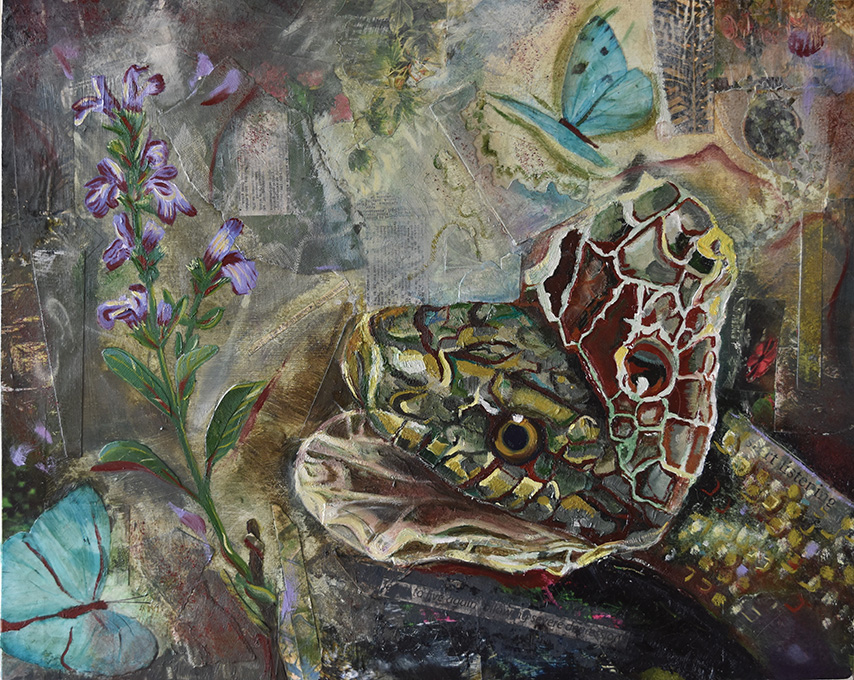 In a sense, Scott had been exploring the psychology behind this series for years. Still, she worried that it wouldn’t qualify as a research project when she applied for a Spring 2020 Undergraduate Research Experience and Creative Activity (URECA) grant, which pays a stipend plus materials costs.

Her Honors thesis advisor and URECA faculty mentor, Erin Anfinson, explained to her that in the visual arts, research is reflected in both content and process.

“There’s some heavy symbolism in there, but the whole thing was a learning experience,” Scott said.

I learned how to use different materials. I learned how to propose a project. And I learned to be adaptable. I came into a lot of difficulties throughout the process, and I had to address those and adjust expectations as needed.

Those difficulties included losing access to the campus studio when much of the campus shut down last spring due to the COVID-19 crisis. Scott requested a deadline extension and spent the summer hauling her works-in-progress back and forth between her cramped apartment in Murfreesboro and her family’s home in Knoxville, where there was room to paint. 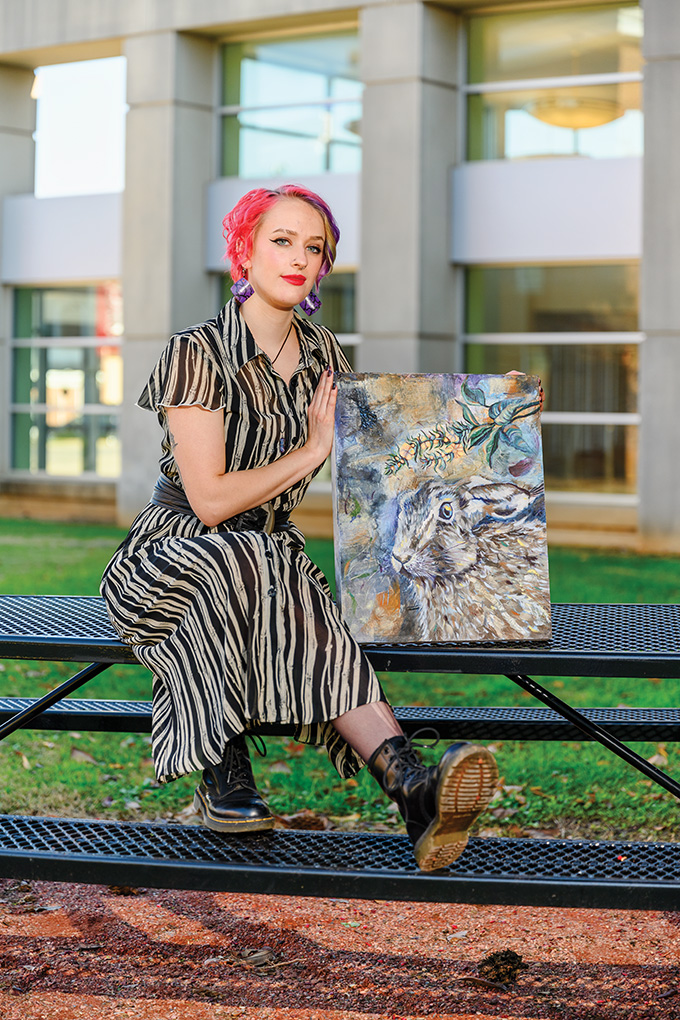 Like many college students in 2020, Scott also battled pandemic burnout. She says Anfinson helped her keep momentum and perspective when she was essentially in survival mode.

“Her advice a lot of the time was just to step back from it and let myself remember why I started doing this in the first place,” Scott said. “You get so caught up in the process—the painting layers and trying to get it to look right—it’s easy to forget the content and the meaning of it.”

She finished her paintings last August, and they will be displayed in Todd Hall for her thesis exhibition Feb. 27–March 9, 2021. Then she’ll hang them on her apartment wall, reminders of all she went through to create them—and testaments to her resilience.