MTSU’s College of Education of..

In fair Verona, where MTSU Theatre lays its scene Oct. 1-4 in the fall 2020 season-opening production, saints have hands, but pilgrims won’t be touching them, and masks will conceal the blushes of those saints and pilgrims’ lips. 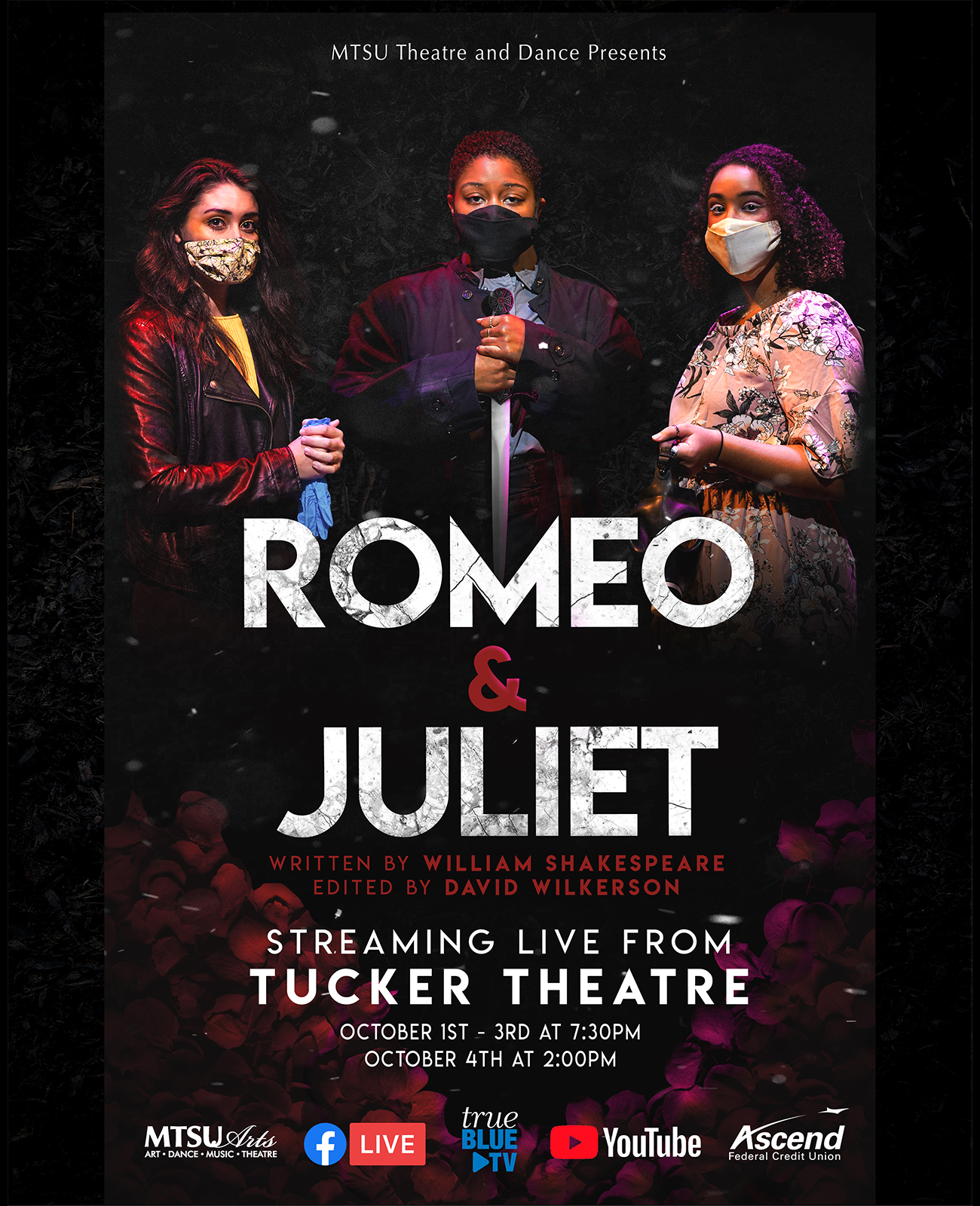 MTSU Theatre performers are ready for the university’s Oct. 1-4 production of William Shakespeare’s “Romeo and Juliet,” which will air live at MTSU.edu/live, the True Blue TV channel and the MTSU and MTSU Theatre Facebook Live sites. Cast members shown from left are MTSU senior Alexa Pulley of Cunningham, Tenn., who portrays Romeo; sophomore Zoe Jones of Antioch, Tenn., who portrays Friar Laurence; and senior Katlyn Marion of Murfreesboro, who portrays Juliet. Click on the poster to see a larger image. (MTSU Theatre poster)

MTSU students also can attend the live shows, seated six feet apart and at no charge, inside Tucker Theatre in the Boutwell Dramatic Arts Auditorium.

Wilkerson, who directed a critically acclaimed and revealingly dystopian “Macbeth” for the Nashville Shakespeare Festival last spring, only slightly tweaked the text of the star-crossed lovers’ tragedy for MTSU’s troupe.

The production, however, complete with all the Bard’s masks and gloves upon cheeks and sorrowful partings, is full 2020.

The diverse cast bends gender and societal tropes from the start in the 423-year-old tale, all while working under strict guidelines for masking, distancing, sanitation and testing adapted from multiple professional sources, including Actors Equity, the U.S. Occupational Safety and Health Administration, and the Centers for Disease Control and Prevention, both backstage and onstage.

“This is going to be the most unique season we ever do in the history of MTSU theatre,” says Todd Seage, the department’s technical director and longtime instructor, who also works with multiple area theater companies.

He’s serving double duty for this show as Juliet’s father, Lord Capulet, and as the production’s technical director.

“The fact that we’re even doing it and how it plays out is going to be really interesting for the students on campus (who see it live), sure, and also for the people who allow themselves to Zoom in and Facebook Live in and livestream with us.

“I’ve been in two other ‘Romeo and Juliet’s, and it’s a really unique interpretation of the script. What David has really done a great job with and continues to do is wanting us to engage the audience, to remind them that always, throughout every part of the play, that they are part of this community, they’re part of the world that we create, and he’s created a really neat world that is similar in some ways to the world we’re living in right now but is also very different in lots of ways.”

The department shut down its big spring musical, “Alexander and the Terrible, Horrible, No Good, Very Bad Day,” two weeks before opening night, after months of preparation, when the pandemic forced MTSU to turn to remote classes and cancel campus events.

Since then, administrators, professors and students have been working on a plan to safely resume the hands-on professional training students need in their classes — and, somehow, return to the in-the-moment response of live performances.

“I can’t imagine how difficult it was for our production manager for the department and the department chair and all our professors to figure out how in the heck we’re going to convince MTSU that it’s fine for 20 people to come back and be making theater together, but I’m so grateful that they did, because not being able to do theater, as a theater person, drives you crazy,” says junior theatre major Cassidy Woodall of Murfreesboro.

“Getting back into the groove of late — yeah, it’s different; we can’t do everything we wanted to do, the story’s a little bit different, and we’re masked, but we’re still creating art and we’re still doing it in the community, and it’s such a relief.”

She also pointed out the deeper poignancy of the partings in “Romeo and Juliet,” worsened for audience, cast and crew by the same enforced distance they may have experienced with their own losses this year.

“When Mercutio dies,” Woodall explains, “he … asks Benvolio to help him get into a house, but they can’t touch, and this moment is so much more extreme because they want to help and Mercutio is dying but they can’t come near him. And it hurts me so much more than I think it would if I saw the regular version of the play.”

The humanity of theater is also integral to backstage life, Seage notes.

“If you know theater people at all, you must know that we crave contact and interaction, and it’s almost impossible for Cassidy and the other assistant stage managers to have to be the arbiters and say ‘Six feet!’ any time we get closer,” he says.

“It’s hard to be here as a group, which we’re all thankful for, and then not be able to give a high-five or an elbow bump every now and then. … Still, it feels so good, even with six feet, to be onstage and performing or designing or building.” 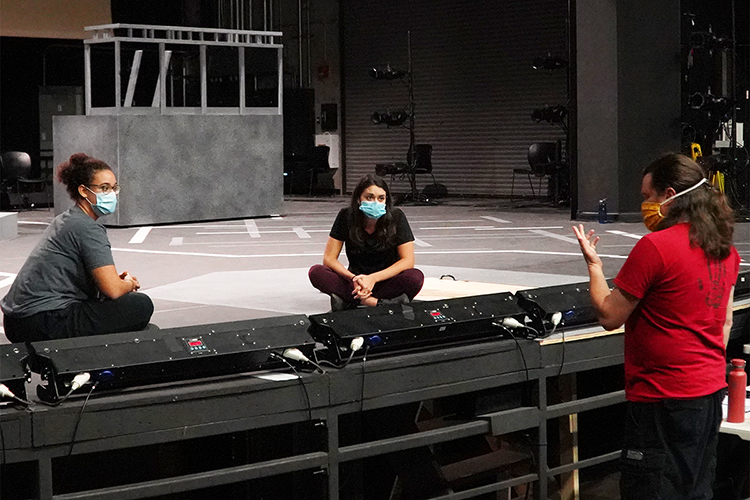 MTSU seniors Katlyn Marion of Murfreesboro, left, who portrays Juliet, and Alexa Pulley of Cunningham, Tenn., who portrays Romeo, listen intently as Department of Theatre and Dance lecturer David Wilkerson offers some suggestions during a rehearsal for the university’s Oct. 1-4 production of William Shakespeare’s “Romeo and Juliet.” Wilkerson is directing the show, which will air live at MTSU.edu/live, the True Blue TV channel and the MTSU and MTSU Theatre Facebook Live sites. A few free in-person tickets are also available for students. (MTSU Department of Theatre and Dance photo)

The full cast and crew listing is available at https://mtsu.edu/theatreanddance/programs/RomeoandJuliet.php.

True Blue TV is available online at https://mtsu.edu/truebluetv/stream.php and on channel 99 on AT&T U-verse in Middle Tennessee; Comcast Xfinity channels 9 and 1096; channel 9.1 on the MTSU campus; channel 195 on DTC in Alexandria, Tennessee; and digital channel 206 on United Communications in Chapel Hill, Tennessee.

Those productions will be available for live viewing via BroadwayOnDemand.com. For more details, visit www.mtsu.edu/theatreanddance/currentseason.php. 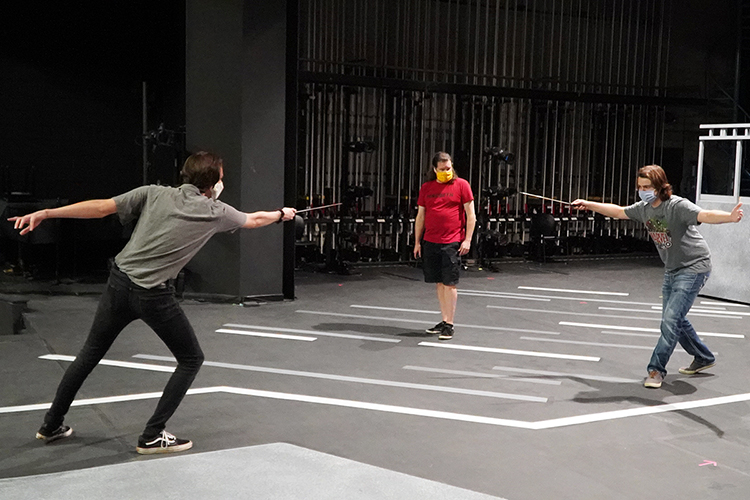