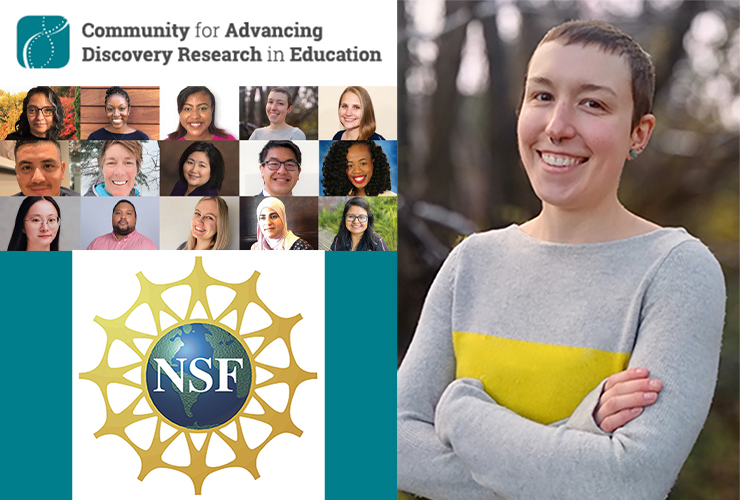 An MTSU doctoral candidate is one of only 15 people to receive one of the most competitive STEM — science, technology, engineering and mathematics — education fellowships in the country.

Sara Salisbury, who is pursuing her doctorate in mathematics and science education with a concentration on biological education, is MTSU’s first ever recipient of a Community for Advancing Discovery Research in Education fellowship. The resource network known as CADRE is supported by the National Science Foundation.

“You are put in contact with mentors from across the country that are all funded by the National Science Foundation, which means that they have contemporary active research that’s going on,” said Ryan “Seth” Jones, an assistant professor in the Womack Department of Educational Leadership.

“You get to know 14 other graduate students across the country that will be the next generation of scholars that are leading research in these fields.”

Salisbury, a native of Pittsburgh, Pennsylvania, who lives in Nashville, said she is grateful to be in the company of such accomplished people.

“To have my work considered amongst them is incredibly humbling and has given me additional motivation to keep pushing, keep pursuing and to go for things that perhaps I did not think I was capable of before,” Salisbury said.

Specifically, Salisbury focuses on bringing the science of ecology closer to home for middle school students by relating it to experiences in their own lives.

Working at an unnamed middle school in the Southeast, Salisbury introduces students to a 40-by-40-foot, fenced-off, “untamed” area of the schoolyard.

“It’s kind of directly juxtaposed to the super-mowed, super-maintained areas,” Salisbury said. “So it’s kind of presenting a new side of the schoolyard that the students may not have realized was under foot.”

Salisbury’s work dovetails with Jones’ NSF-funded project, which designs opportunities for math and science teachers to use statistical and model-based curricula. It helps the students see the connection between the scientific data they collect and mathematics.

For more information about MTSU’s mathematics and science education doctoral program, contact Jones at 615-898-2996 or ryan.jones@mtsu.edu.

To learn more about CADRE fellowships, go to www.cadrek12.org.