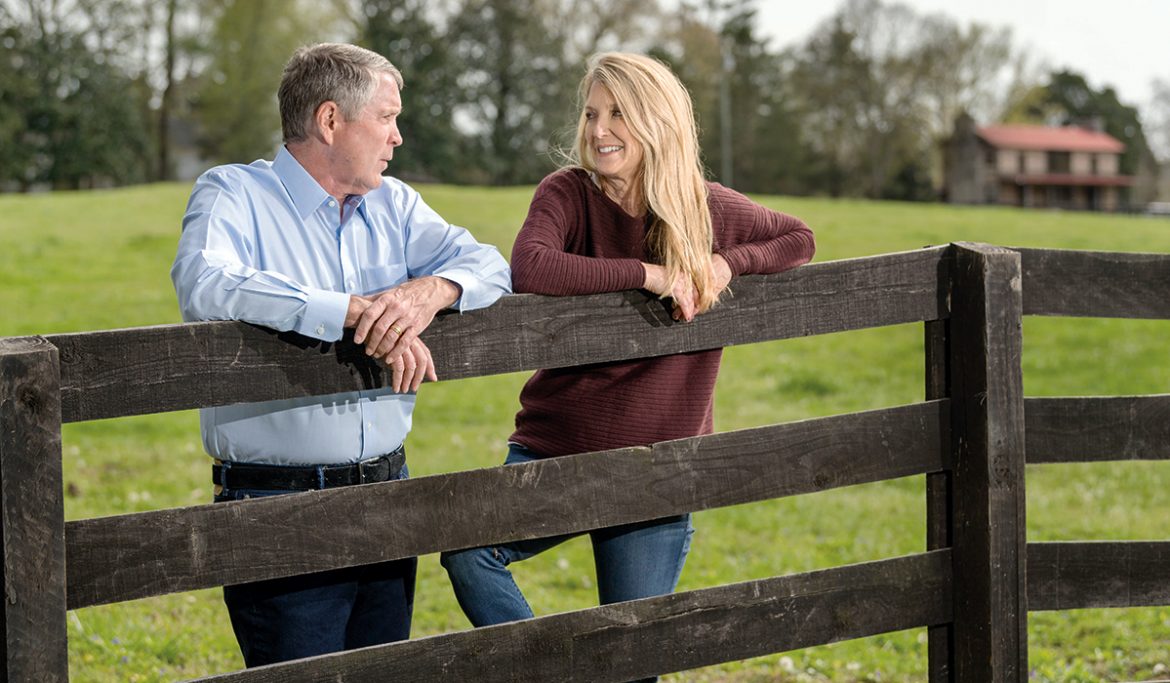 Along the tree-lined banks of the Harpeth River in the heart of Williamson County, Tennessee, it’s easy to fall under the charms of the agricultural patchwork and well-spaced ancestral homes. Not only does such a bucolic scene inspire a sense of serenity, it also points to our roots as a people: a continuum of culture that spans hundreds of generations and thousands of years. But on one five-acre lot in particular—one that’s located where the ruddy waters of Brown Creek spill into the Harpeth River—there is literally more truth to that than an untrained eye could possibly see. And protecting what most of us can’t see—clues that a great civilization that one anthropologist from MTSU knows thrived there long ago—is where Dr. William (Bill) and Tracy Frist come into this fascinating story. The heart- and lung-transplant surgeon and former majority leader of the U.S. Senate and his wife, an accomplished equestrienne and farm manager from Virginia who is one-quarter Native American, purchased the land in 2015 with the aim of preserving the site called Old Town, which contains the remains of the civilization that began some 12,000 years ago and flourished both economically and culturally for centuries.

“As a little boy, I remember going to church picnics ‘way out’ at Henry Goodpasture’s farm at Old Town and seeing the big mounds adjacent the stately home and listening to the stories about some distant culture who lived on those lands for hundreds of years and then disappeared,” Dr. Frist told MTSU Magazine, referring to the property that he now owns. “Mr. Goodpasture had a vast collection of pottery and relics that had been plowed up or found in the front yard along the banks of the Harpeth River.”

“The purpose of the Old Town Heritage Project is to support academic-led new discovery of the ancient history of middle Tennessee and the broad distribution and sharing of that new knowledge with the public and future generations,” he said. 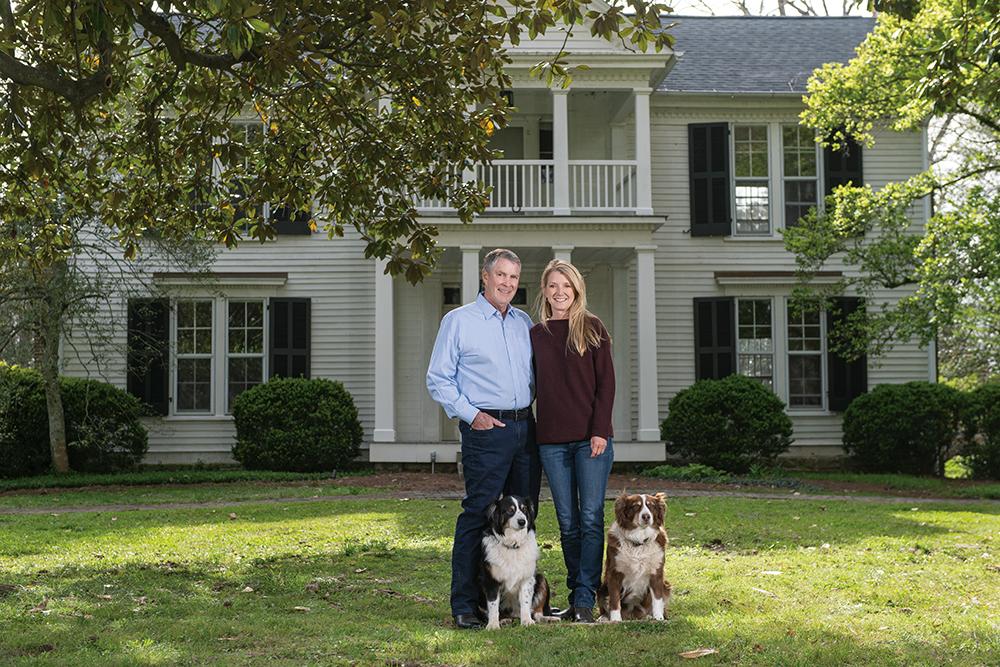 The Frists asked MTSU Anthropology Professor Kevin E. Smith to lead the scientific research component of the preservation effort. Smith had long been familiar with the site, having first explored the property superficially some 25 years ago at the request of previous owners.

“Our hope is to garner a much richer and more complete understanding of its ancient history under the direction and leadership of MTSU,” Frist said. “Academic institutions like MTSU are at the forefront of discovery and play a vital role in uncovering that untold history for scholars, archaeologists, historians, anthropologists, and schoolchildren for generations to come.”

But what exactly are the Frists working with MTSU to preserve?

“This is a town, not just an archeological site,” Smith said. “People lived here and had great leaders. We only have about three such sites in state ownership and two in private, so this is a new addition. This is the first concerted effort by a private land owner in middle Tennessee to take it upon themselves to preserve it as the state would if they owned it.”

But picturing what may constitute a “town” from the Mississippian Period can be a challenge. And why did they settle in what would become middle Tennessee centuries later?

“We walk and drive upon a truly grand civilization every day in middle Tennessee,” Smith said, noting that a paved stretch of the Natchez Trace covers part of Old Town’s ruins. “There used to be about 40 towns like Old Town all along the Cumberland River and its tributaries. There’s also great farmland here, which supported their economy. It was one of the most densely populated areas east of the Mississippi in the prehistoric era. Geographically, it was the center of the trade routes in all directions.” 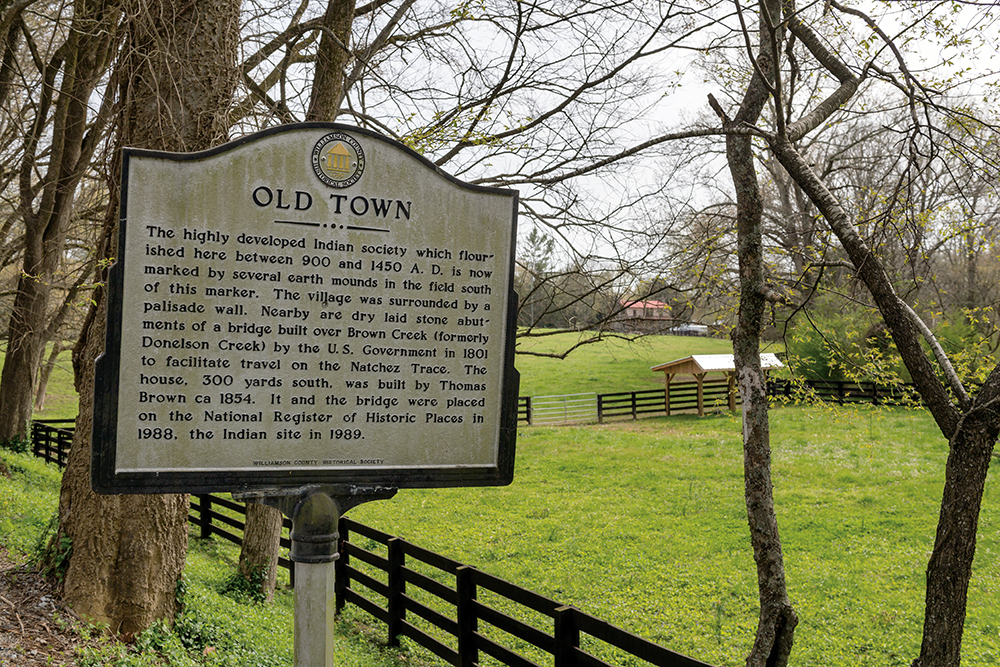 In a few small ways, Nashville has something in common with the prehistoric civilization that occupied middle Tennessee thousands of years ago: It is one of only a handful of U.S. cities to have three interstates intersect within its city limits, thus fueling economic trade in all directions. Agriculture remains the Volunteer State’s top industry. And to say it’s “densely populated” would be an understatement.

The most obvious clues that mark the site as an ancient civilization are the multiple earthen mounds ranging from 4 to 12 feet in height that are scattered on a plot of land roughly the size of a football field.

“This dozens of towns and tens of thousands of people building some of the mounds that were some of the largest earthen constructions built in middle Tennessee until the 1950s,” Smith said. “We didn’t have the ability to build these types of structures until we got bulldozers, and they did it with baskets.”

Smith, who has studied six other mounds in the region since the 1980s, said they played important, multifaceted roles in the lives of those who lived in the community. 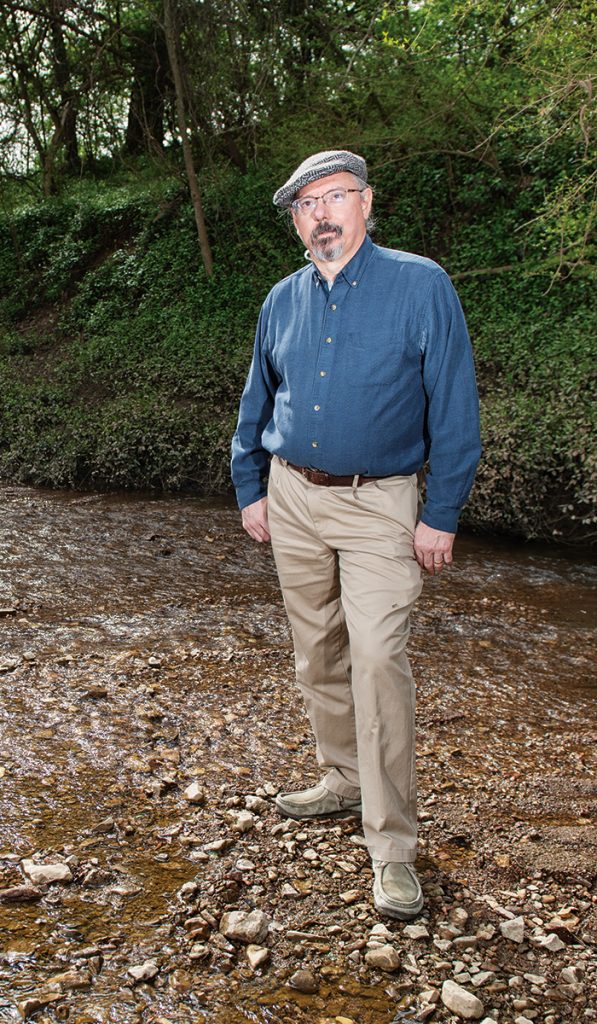 “Mounds like this are platforms that elevate; they are the same as Maya temples [in Guatemala] atop a pyramid,” Smith said. “These in middle Tennessee were built with earth and on top were houses for the kings of these towns and their families and temples.”

In addition to establishing vibrant trade relations throughout the region—the Natchez Trace perhaps being the most significant (and famous) prehistoric trade route for the region—the Mississippian people, as scholars know them, also cultivated a rich, highly developed artistic tradition.

“In many ways, it was the most fabulous art tradition that ever existed in North America,” Smith said. “Much of Mississippian art centers on things that took place at the time of what they viewed as creation, with depictions of supernatural heroes who cleared the earth of monsters so humans could live here—much like the hero twins associated with the Maya civilization. The other part of the Mississippian peoples’ art dealt with what happens to the soul after the body dies. Their art explored the possibility of reincarnation.”

Previous owners of the property, including the Nashville historic families of the Browns and the Goodpastures, musician Jimmy Buffett, and later, singer Kim Carnes, took measures not to impact the site in ways that might be destructive. The Cromling family, originally from Ohio, restored the dry-stacked bulwarks of the historic 1802 Old Town bridge over Brown Creek and used state-of-the-art ultrasound technology to identify more than 220 ancient stone box burial sites in sampled areas around the mounds. And the Frists, working with MTSU, are taking giant steps toward preserving the site in perpetuity, but not without inviting other stakeholders to the table, too.

“Obviously, there are many people who should contribute to the decision-making process, including the descendants of the southeastern Native American tribes,” Smith said. “And I hope we can find some of the descendants of the slaves of the Brown family and civilization lasted 500 years or so, with about a century and a half where there were dozens and gauge their insights and perspectives on how the site should be interpreted and preserved. The Frists are certainly very cognizant of that.” 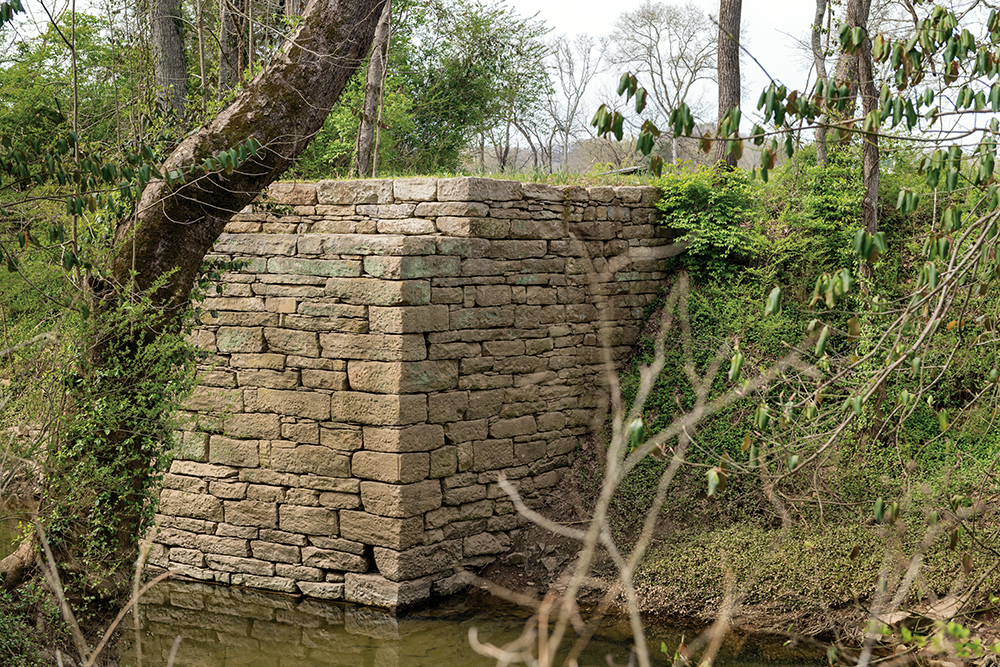 For now, Smith is overseeing non-invasive exploration using radar-type equipment that can provide clues as to what secrets the mound may contain.

“We’re currently doing non-intrusive, high-tech archeology using magnetometry and ground-penetrating radar to map this site out without disturbing it,” Smith said. “If the soil chemistry cooperates, we’ll have a picture of where the houses were located, as well as where the cemetery and graves were located, and a more precise idea of where the original town wall was located. And all of that can be done without turning over a spade of soil. Then, with the input of all the stakeholders, we can decide whether we’ll do some limited archeological work to answer specific questions without disturbing any graves or destroying anything.”

This isn’t the first initiative funded by the Frists at MTSU. Far from it, in fact. The couple has donated several times to research-related causes in recent years.

“We first contributed to MTSU about 10 years ago, working with [alumnus and MTSU Board of Trustees chair] Steve Smith to support a Center for Strategic and International Studies Presidential Scholar from the school,” Frist said. “Second, Tracy and I two years ago established the Bill and Tracy Frist Old Town Endowed Scholarship for Native America, which matches funds raised through Kevin Smith.” 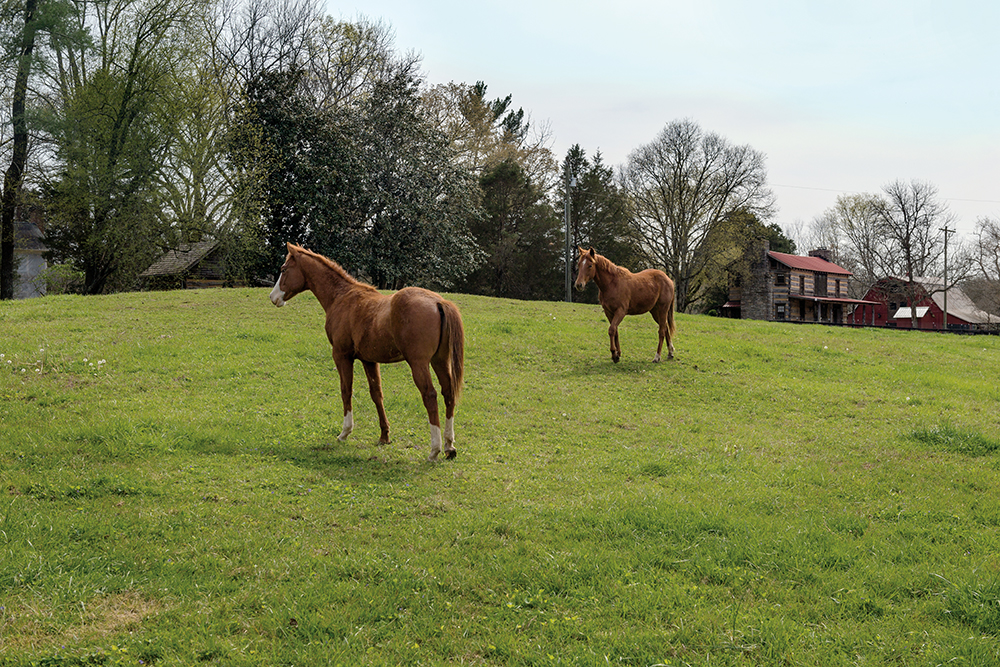 Dr. Frist’s interests in cultural and anthropological history span his lifetime and have led him to leadership roles in some of the world’s top institutions. He has served on the Board of Regents of the Smithsonian Institution in Washington, D.C., which is the governing board for all 15 individual Smithsonian museums and facilities. He currently sits on the board of the Smithsonian National Museum of the American Indian.

“Interestingly, both the Smithsonian museums of Natural History and the American Indian, as well as the Peabody Museum at Harvard, have ancient pieces and remains dating back a thousand years that were removed from our property at Old Town years ago,” Frist said.

He also serves as a director on the global board of The Nature Conservancy, the largest land and environmental conservation group in the country. And the paternal grandmother of Tracy Frist is Native American, leading her to be a “devoted student of Native American culture,” he said.

Together, the Frists have participated in the Lakota summer solstice celebration in South Dakota near Hill City the past four years, he said. And Tracy has long participated in Lakota Sun Dance ceremonies in the same region.

“Tracy and I are passionate about conservation of land, nature, and culture,” Frist said. “History in context inspires us, and we want it to inspire others. We want to add to the limited body of knowledge of what is today known about ancient civilizations in middle Tennessee. It is largely an untold story. The preservation of Old Town and conservation of the land and legacy for generations to come is our passion and our mission.” MTSU 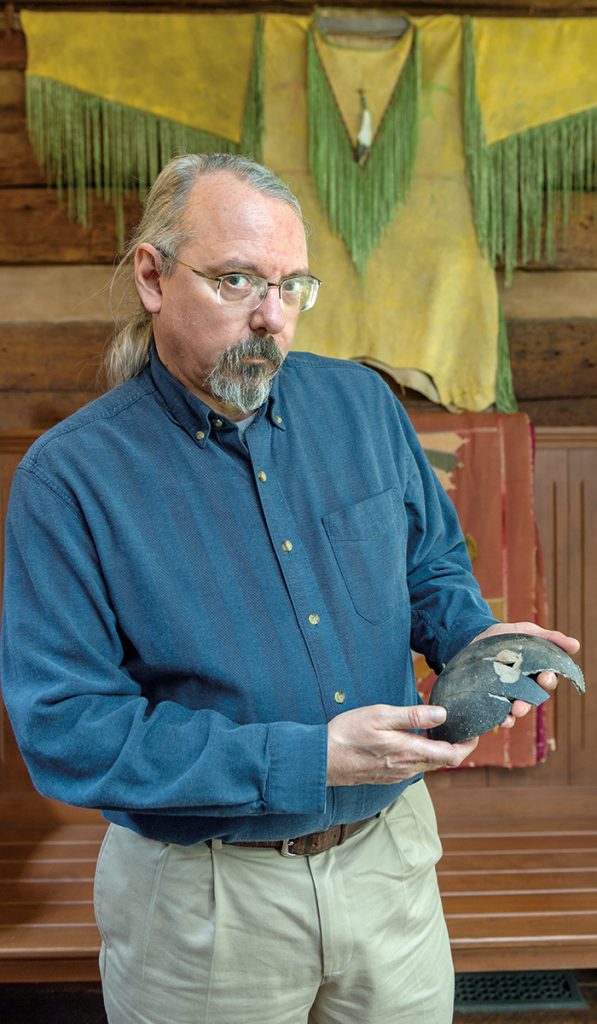 A tradition at MTSU’s Fall Faculty Meeting is the annual presentation of the MTSU Foundation Awards, which recognize, celebrate, and reward University faculty members for their accomplishments inside and outside the classroom.

The 2017 recipient of the foundation’s Career Achievement Award, considered the pinnacle of recognition for stellar MTSU professors, was Kevin E. Smith, a nationally recognized professor of Anthropology at MTSU since 1988, a full-time faculty member since 1994, and the founder and director of MTSU’s Anthropology program in the College of Liberal Arts’ Department of Sociology and Anthropology.

Smith’s research interests lie in the archaeology of the southeastern United States, with a particular focus on the late prehistoric Native American cultures of middle Tennessee pre-1500 C.E., Tennessee’s late 18th- and early 19th-century frontier period, and African-American life from slavery through Reconstruction. He’s an internationally recognized scholar on middle Tennessee’s archaeology and an acclaimed mentor to hundreds of students whose involvement in the more than 30 different courses he’s taught at MTSU is enabling them to take their knowledge and talent around the world.

Smith said he felt MTSU’s Anthropology program has been vital over the years in preserving archaeological sites around the region as the areas around Nashville experienced tremendous growth and development over the years.

In addition to his University service, Smith has organized or chaired more than 20 national,regional, and state conferences and symposia and conducted archival and collections research for theSmithsonian Institution’s National Museum of the American Indian and the Tennessee State Museum, among others.