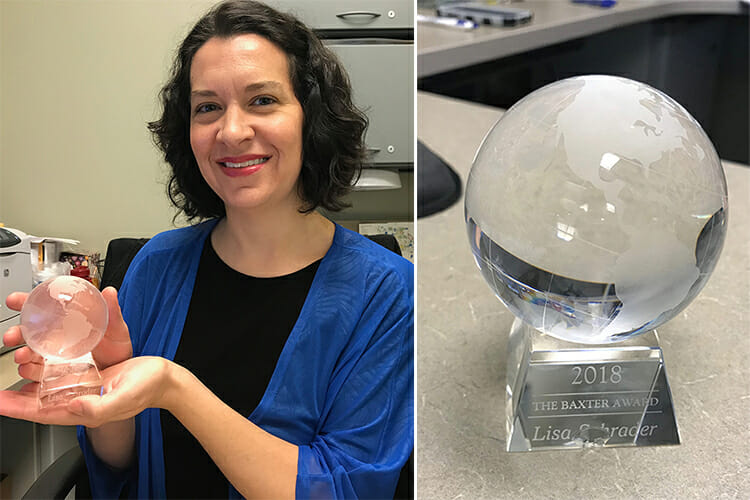 MTSU’s Lisa Schrader, director of the Office of Health Promotion, has received a statewide award from the Coalition for Healthy and Safe Campus Communities.

The Susanna L. Baxter Drug, Alcohol, and Violence Prevention in Higher Education Award is presented every two years to a person in the state of Tennessee who, like Baxter, “has volunteered his or her time and energy to achieve positive results in the area of alcohol and other drug and violence prevention” at the collegiate level.

Receiving the award was a moment to remember for Schrader, she said, because she had a special guest who witnessed the entire experience with her.

“Just as a mother and as a female, I loved that my little girl (was able to) see her mother recognized for work that she was doing,” Schrader said of her 3-year-old daughter, Alaina.

CHASCo is a collection of higher education professionals that identify and address health and safety issues on both public and private college campuses and universities in Tennessee. Providing several resources such as networking opportunities, assessment tools, funding for evidence-based programming and more allow CHASCo to achieve its goal of addressing health and safety issues on campuses.

Schrader, who received the award in the spring, is an MTSU alumna who obtained her bachelor’s degree in nutrition in 2002 and later joined the Health Services staff in the Student Health, Wellness and Recreation Center.

“I’ve served in a leadership capacity with (CHASCo) since 2009,” Schrader said of her coalition work.

MTSU freshmen Eric Manger, left, and Brianna Johnson, both 18, check out pamphlets provided by Health Promotion Director Lisa Schrader during the annual Department Fair in the Student Union Commons in this September 2016 file photo. Manger is a computer science major from Hermitage, Tenn., while Johnson is a premed major from Columbia, Tenn. (MTSU file photo by Randy Weiler)

According to a coalition news release, Schrader is “very active” by serving multiple roles on CHASCo’s Executive Board. She was recently elected vice-chair in 2016 and also served as chair from January 2017 until June 2018.

“Lisa has been instrumental in ensuring CHASCo continues to be a proactive, statewide resource for colleges and their surrounding communities to combat alcohol and drug abuse and the violence often associated with it,” the release states.

CHASCo also sponsors many of MTSU’s prevention activities such as “MTSU After Dark,” which provides free entertainment like movies, bowling, and laser tag to students during late night hours. A recent project that has been sponsored by CHASCo is impaired driving prevention to include a virtual reality simulation scheduled to debut in the fall.

By bringing together campus leaders from 32 public and private college campuses, CHASCo says it is reducing substance abuse and preventing violence statewide.

Since its inception in 2002, the coalition has received multiple state and federal grants to provide training sessions annually to staff from its member campuses on research-based prevention tools including motivational interviewing and social norming.

For more information about CHASCo, go to www.tnchasco.org.

For more information about MTSU Health Promotion, go to www.mtsu.edu/healthpro.