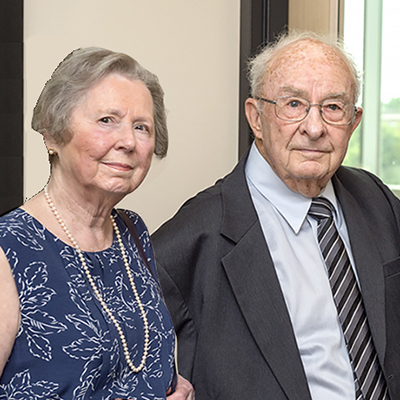 More than a half-century of devoted service and giving to the university at which they attended, worked and still love as alumni has come full circle for Dan and Margaret Scott.

MTSU honored the longtime contributors and Murfreesboro residents with the naming of the “Dr. Dan and Margaret Scott Chemistry Department Office” May 29 during a ceremony attended by dozens of supporters on the second floor of the Science Building’s Liz and Creighton Rhea Atrium.

MTSU officials said the Scotts were chosen because of their significant contributions of both time and money to MTSU and because of their impact on the university. Following the ceremony, a sign with their name was unveiled in the chemistry department’s office area on the third floor.

Murfreesboro residents Dan and Margaret Scott, MTSU alumni and retired university faculty members in chemistry and the James E. Walker Library, respectively, unveil the sign May 29 that was placed in their honor on the third floor of the Science Building naming the “Dr. Dan and Margaret Scott Chemistry Department Office.” (MTSU photos by J. Intintoli)

Dan Scott served as department chair for 11 of his 37 years in higher education before retiring as professor emeritus in 1992. Margaret Scott retired as an associate professor in collection management – acquisitions in the James E. Walker Library in ’92.

“We are extremely grateful to Dr. Dan and Margaret for their service and many years of support to the university,” said Joe Bales, vice president for university advancement.

“Naming the department office is a fitting tribute to a couple who have given so much to MTSU, the College of Basic and Applied Sciences and the chemistry department.”

Dan Scott, a 1950 graduate of then Middle Tennessee State College, said he was very thankful for the recognition.

“It makes me think everything I did all 37 years was recognized,” he said. “It’s quite an honor, and I appreciate it and thank everybody involved. I just enjoyed my years at MTSU, and I tried to help in every way I can.”

Margaret Scott, who earned her bachelor and Master of Arts degrees from MTSU, said it is “an honor to be recognized for contributions we’ve made in the past.”

Former MTSU President Sam Ingram recognized the couple for their academic and philanthropic efforts and their friendship through the years.

“Here are two people that have given the better part of their productive careers helping MTSU become what it is today. And they’ve done it gladly, happily,” said Ingram, who led the university from 1979 to 1989. “They are both responsible people. You give them a job to do, then just get out of the way … and the job will be done.

“They’re student-oriented. They understand that higher ed is not about what the institution can do for faculty and administrators,” Ingram continued, “but whether or not it can achieve the mission it has, and that is to take students who are eligible to attend and give them the information, skills and knowledge they need to be more successful adults and human beings in life.”

College of Basic and Applied Sciences Dean Bud Fischer said the college “is grateful for the Scott family’s longtime generosity to the chemistry department and looks forward to continuing our relationship with them.”

“The unique combination of excellence and selfless service by our partners, like the Scott family, is what sets Middle Tennessee State University apart as a unique institution in America,” Fischer added.

Reflecting back on his university career, Dan Scott recalled that the former Soviet Union’s October 1957 Sputnik 1 launch pushed the U.S. government and the National Science Foundation to strengthen science education.

Scott and his fellow faculty members moved into Davis Science Building in 1967; “Us old-timers still call it the ‘new science building,’” he said.

An alumnus and a retired department chairman and faculty member, he witnessed the opening of the $147 million Science Building last August. The Scotts assisted with the Department of Chemistry’s move-in expenses.

Both love the Blue Raiders. With season tickets, he attends all football, men’s and women’s basketball and baseball games. The Dan D. Scott Endowed Scholarship for chemistry majors was established in 2008.

Margaret Scott received the King-Hampton Award in 1993 for significant contributions to the advancement of women at MTSU. She is a member of the longstanding Dames Club and bridge and sewing groups.

“Margaret was a very kind mentor to me when I started at MTSU in 1984 and helped me to get involved both on and off-campus,” said Sharon Parente, Walker Library assistant professor. “I remember her being a member of numerous campus and civic organizations. She was highly professional and an excellent role model.”

In addition to MTSU administrators, staff and faculty, a number of Scott family members and friends attended the event. The Scotts have three children and four grandchildren.

Currently chaired by Dr. Greg Van Patten, the Department of Chemistry is one of 11 departments in the College of Basic and Applied Sciences. Learn more at www.mtsu.edu/programs/chemistry.