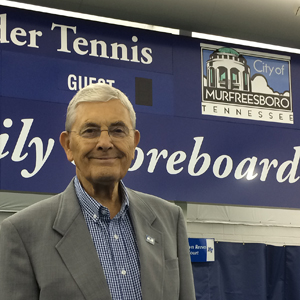 CityTV’s newest episode of “Murfreesboro Storytellers” showcases the story of a win-win partnership that culminated in the development and construction of the new Adams Tennis Complex in Murfreesboro.

The eight-court facility, which opened in mid-July at 925 Gold Lane in Old Fort Park, will be the new home of Blue Raider tennis.

CityTV is located on Comcast Xfinity Channel 3 and AT&T Uverse channel 99 or you can find the program online by visiting www.murfreesborotn.gov/storytellers.

The interview features some of the following topics:

John Hood, MTSU’s director of community engagement and support, is host of the monthy “Murfreesboro Storytellers” program on CityTV. (City of Murfreesboro photo)