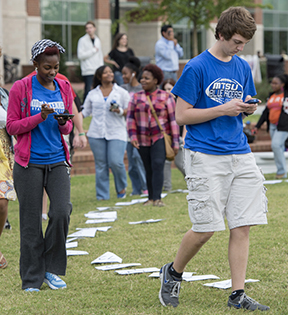 About 200 MTSU freshmen participating in the first Freshman Treasure Walk Oct. 2 in the Student Union Commons get involved in a cakewalk. One of 16 Connection Point events to get freshmen more involved in campus, the treasure walk included music, cake, giveaways and prizes. (MTSU photos by Andy Heidt)

The first MTSU Freshman Treasure Walk turned out to be a hot event with an even hotter giveaway item.

More than 200 freshmen attended the event, which was held Oct. 2 in the Student Union Commons as part of Homecoming Week activities.

“It went very well,” said senior Brandon Loso, the 2013 Student Government Association homecoming director who has coordinated events throughout the week of Sept. 28-Oct. 5 leading to the Blue Raiders homecoming game against East Carolina University. “For the first year, testing the waters to see how this event would pan out, we were very pleased.”

The SGA gave away several homecoming sweatshirts, but the big draw was a lanyard with the extremely popular MTSU collectible buttons.

“This is what kept students around the longest,” Loso said. “We had people wanting to buy the lanyard.”

More than 30 buttons now comprise the collection, which began through the Office of Admissions and is overseen by Nathan Haynes, newly named assistant director of recruitment, who recruits East Tennessee.

“This campaign rewards students for participation in activities such as academic advising, extracurricular involvement, football games, and many others,” Haynes said. “The campaign has been a huge success. As a result several new departments have jumped on board and gotten buttons outside of the original 28.”

Newer buttons not featured on the website include ARAMARK/MT Dining, Student Programming, visit and transfer (both admissions), psychology and housing

The buttons come in a variety of colors. Topics include CUSTOMS (summer orientation program), the summer reading program, “I AM true BLUE,” Convocation football games and more. They can be earned or obtained by following the directions included with each of the buttons on the website. For more information, visit www.mtsu.edu/buttons.

The event included a cakewalk and music. It also served as one of 16 Connection Point activities to get freshmen more involved in campus.

Some of the 200 MTSU freshmen participating in the first Freshman Treasure Walk Oct. 2 in the Student Union Commons visit as the event gets underway.