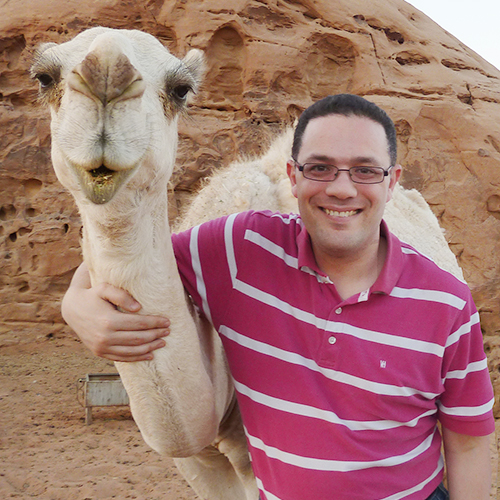 An MTSU professor is getting a helping hand with his research in the Middle East from an alumnus whose business is growing in more ways than one.

Dr. Sean Foley, associate professor in the Department of History, is on leave in Saudi Arabia and writing a book on its history and society.

To enhance Foley’s work, the professor contacted Abdullah Alkobraish, who earned his master’s degree in business administration from MTSU in 2011.

Alkobraish, a former president of MTSU’s Saudi Student Association, met with Foley in Riyadh, the Saudi capital, and arranged for Foley to take a tour of Tabuk in the first week of September.

Although he had a business obligation in Jeddah and couldn’t join Foley’s tour, Alkobraish stayed in constant contact with the professor to make sure things went smoothly.

Tabuk, Foley wrote in an email, “is situated in Saudi Arabia’s northwest and is famous for its ancient historical sites, cool weather, deserts, large farms and pristine beaches.”

The area, which is rarely visited by Westerners, is central to Foley’s research on the agricultural sector of the Saudi economy.

Foley and his wife, Kerry, toured ASTRA Farms, the agricultural corporation where Alkobraish began working in February 2013. They viewed fruit and vegetable fields, greenhouses, a dairy, and flower- and meat-processing facilities.

They “also met ASTRA’s diverse workforce, including senior company officials and the Saudi women who package quail meat and flowers for export to Europe,” Foley wrote.

The Foleys also toured the farms owned by TADCO, ASTRA’s sister company, which sends produce to markets from Western Europe to Japan.

The couple examined the Tabuk station of the Hijaz Railway, a famous railroad line built by the Ottoman Empire at the start of the 20th century to connect Damascus, Syria, with the Saudi cities of Mecca and Medina. They saw the scenic Al Zayta mountain range, caves with ancient carvings, and the town of Haql, which is located on the Gulf of Aqaba near Saudi Arabia’s border with Jordan.

Foley wrote that he is “profoundly grateful” for the chance to visit Tabuk and said he hopes he can thank Alkobraish, a native of Riyadh, in person soon.

“In my eyes, Abdullah exhibits the finest qualities of Blue Raider graduates, no matter their nationalities — men and women who are bright, confident, multilingual, hard workers, open to people of various backgrounds and dedicated to making the world a better place,” wrote Foley.

The professor’s work in Saudi Arabia is funded by a grant from King Saud University’s International Scientific Twinning Program.

“Since I began teaching at MTSU in 2006, the Department of History, the College of Liberal Arts, the Office of Research Services and the university administration have strongly supported my work,” wrote Foley.

Dr. Sean Foley samples the fruits of the vineyard at TADCO Farms in Tabuk, Saudi Arabia.